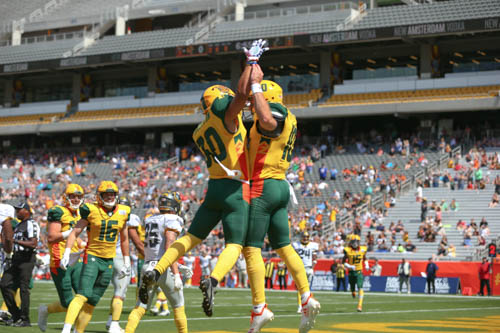 I filled in on the radio play by play of the Arizona Hotshot football games the last two weekends. Jeff Munn, the voice of the AAF team, was on Arizona State Women’s basketball assignment so I was the pinch sitter in the broadcast booth. Those that want to sneer at the product simply don’t like football. Those who want to criticize, haven’t walked in the stadium or sat on a plane with the players down to San Antonio like I did this past weekend. The Hotshots won their third straight on Sunday night. They finish their home portion of the schedule this coming Sunday night against Birmingham. I’d suggest you give it a chance.It looks like we will have playoff football here in April.

The participants in this League are trying to get back to the NFL. The NFL grinds up their workforce at an alarming rate(average playing career in the NFL is less than three years).
How does a player get better if they get cut in the last week of training camp in August and can’t work out again with a team till the following Spring? Baseball has it’s minor league farm system, why can’t the NFL? The NBA has created the D and G-Leagues. Minor league hockey was a part of the Valley sports scene for years with the Roadrunners.

You might think that the Valley having sports teams that aren’t of the professional variety won’t work. You’d be wrong. Look at what USL Soccer’s Phoenix Rising has become. Rising is still in the USL, and yet, the fan base continues to grow. I’ve even heard whispers that perhaps Rising FC may stay in the USL if Major League Soccer passes them over again in the next round of expansion. I don’t think the fan base of soccer is going anywhere anytime soon.

Back to the ‘Shots, Sundays game was played in front of a mostly filled stadium in San Antonio. The parking lot was full of tailgaters, food and team flags. The rowdy environment was really no different than a Cardinals game in late December when they are out of the playoffs and just finishing out the season. The Hotshots haven’t drawn well in their first season. Rising didn’t either. Sunday the Diamondbacks, Rattlers, Coyotes, and Hotshots were all in action. Nothing wrong with that for our community.