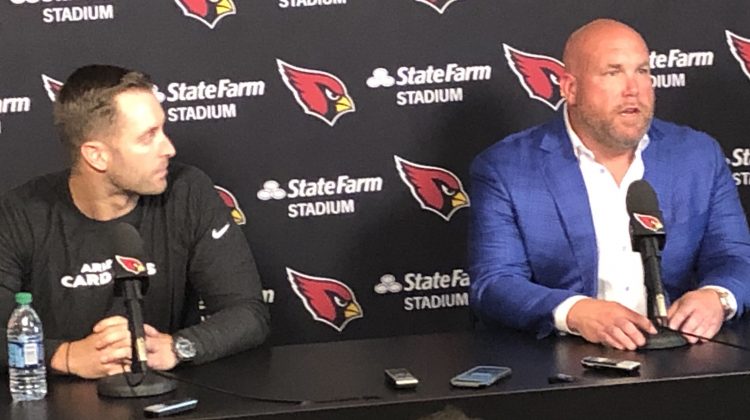 With just over a week before the NFL draft and the Arizona Cardinals sitting atop the draft board, general manager Steve Keim and first-year head coach Kliff Kingsbury addressed the media Tuesday in Tempe in anticipation of the three-day event.

As many expected, the Cards stayed close to the vest on many topics, including the top overall pick.

Keim: “Fact I don’t know what we’re doing but everybody else does make me concerned.” Says with smile on his face.

“We are not done with this process, we have not made a decision on the first overall pick,” Keim said to the assembled media. “There are a number of players…that warrant being the first overall selection. I’m not going to get into hypotheticals today.”

One player which was mentioned numerous times during the 25-minute Q&A was last year’s first-round pick, Josh Rosen, whose name has been floated in several trade rumors which the Cardinals being linked to Kyler Murray by several outlets.

“He’s been phenomenal, he couldn’t have been better,” Kingbury said when asked how the former UCLA star has handled the whispers. “First one to show up [to OTA’s]. Engaged, into it. Can’t say enough good things about my interactions with Josh so far.”

One of the only silver linings in last year’s forgettable 3-13 season is the number one overall pick. The Cards’ front office has certainly enjoyed the process of being in said position of draft power.

“In all the years of doing this I’ve always got excited about those kinds of players and the big grades you slap on them,” Keim explained. “For the first time you’re sitting in that spot and it’s a little different.”

He also evaluated a pair former local high school stars in cornerback Byron Murphy (Saguaro) and wide receiver N’Keal Harry (Chandler). Each has been rumored to potentially be selected in the first round next week.

“Murphy has great skills, really natural anticipation,” Keim said. “He’s really sudden in transition as a corner. I think he’s going to be a heck of a player in the NFL. N’Keal Harry is a big man that can do a lot of different things for you. One thing that excites me about him is his ability to run after the catch…as well as tracking and adjusting to the football down the field.”

Arizona currently has 11 total picks, which include four compensatory selections (one in the sixth round and three in the seventh). The Cards will have the top pick in the first six rounds.

The draft will take place April 25-27 in Nashville, Tennessee.