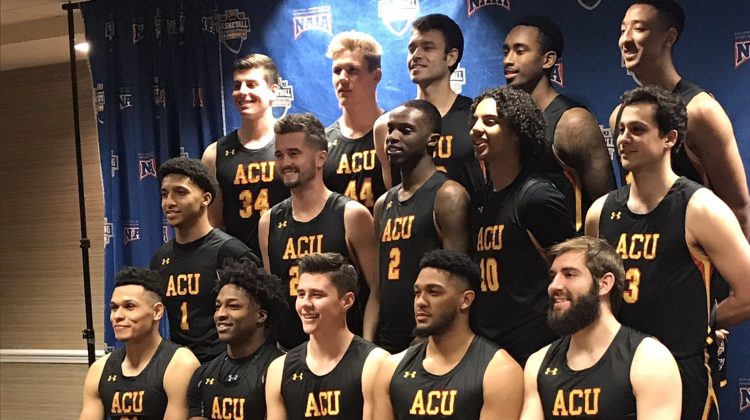 One of the greatest seasons in Arizona Christian Firestorm basketball history came to a close on Saturday night following a historic national tournament run. The Firestorm entered the tournament unranked and the seventh of eight seeds in the Naismith Bracket only 2-2 all-time in the first round of the NAIA National Tournament.

After upsetting the two-seeded Wayland Baptist (TX) on Wednesday, ACU broke an NAIA National Tournament record for three-pointers in a game, knocking down 19 en route to an 83-77 victory over six seed, Loyola University (LA), on Friday. The Cinderella magic came up two points shy against top-seeded Georgetown College (KY) in the Elite Eight on Saturday, the furthest ACU has advanced in program history.

The Firestorm also tied a program record in wins with 25 as well as maintained their highest scoring average and scored their most threes in a season since joining the NAIA in 2009.

ACU knocked off the second seed, Wayland Baptist, on Wednesday but faced the ultimate challenge of battling the top-seeded and top-ranked team in the entire tournament in a faceoff with Georgetown. The winner would advance to the Fab Four to battle Cramer Bracket champion, William Carey (MS).

ACU saw an 8-7 lead three minutes into the game, but Georgetown took over and never looked back to end the half with a six-point lead. The Firestorm continued to trail throughout the game. With only 26 seconds remaining, Georgetown looked like they sealed the victory, playing defense with a ten point lead.

Al Burge knocked down a three followed by an ACU timeout and Georgetown turnover on the inbound pass. Callum Lawson scored two more points and fouled Georgetown where they would miss their first and only free throw of the game on a one-and-one. The defensive rebound led to three missed three-pointers and three offensive rebounds by three different Firestorm players. Terence Shelby found the ball and finally hit the three-pointer.

The Firestorm went on an 8-0 run in the span of 24 seconds to make it a two-point game. Head coach, Jeff Rutter, called their final timeout to draw up a defensive play to steal the ball with two seconds remaining. Senior, Anton Ivy stepped back on the floor for the Firestorm and on the inbound, swiped the ball away for the steal. Before ACU could offically toss up a prayer, time expired and the game was over, 80-78, Georgetown with the win.

In what was almost one of the greatest comebacks and upsets in NAIA Tournament history, it took all 40 minutes of heroics from ACU’s upperclassmen leadership to keep close all game long. Shelby and Lawson both contributed 25 points with Carney and Burge both putting up another 12 points each. Lawson ends his senior season at ACU averaging 22 points and nine rebounds per game. Shelby and Carney ended their junior seasons with around 17 points and four boards per game. The team advanced the furthest in the postseason in program history and tied the best winning percentage in ACU history.

Georgetown dominated in the paint, outscoring ACU 42-18. It was all about the talent of the ten starters, scoring all but five combined points in the game. Arizona Christian fell to Georgetown by the same score in the 2015 second round with Georgetown also ranked number one overall in the NAIA. ACU is 0-3 in games against the NAIA’s number one ranked team, never losing by more than seven points.

Wow! Almost a miracle finish with a mid-court shot to win it but @ACUFirestorm @ACUMBB falls to No. 1 Georgetown 80-78. Could not be prouder of how these young men, like all our student-athletes, represent Christian faith, perseverance and commitment to excellence.

The round two face off against six-seeded Loyola was neck and neck throughout the game. The Firestorm broke program and NAIA records throughout the second half. Not only did the Firestorm lock up their first quarter-final appearance, but ACU also knocked down 19 three-pointers, breaking the former record of 18 set back in 2001.

Arizona Christian entered the second half with a four-point advantage courtesy of an Emilio Acedo triple with five seconds remaining, the tenth of the half for ACU. It took two and a half minutes for a score in the second half before the flood gates opened from beyond the arc once again. The Firestorm knocked down another nine shots from the three-point stripe.

The game was tied with only three minutes remaining but a pair of threes from Acedo and Carney made the difference eventually closing out the game with an 83-77 win. ACU shot nearly 50% from the field behind 23 points from junior, Carney, and 20 more from senior, Acedo.

ACU shot 56% from three, led by Acedo’s 12 triples, Carney’s 10, and another 7 threes dropped by junior, Terance Shelby. The team also overcame being outrebounded on the offensive side for the second straight game.

A Cinderella-like performance fueled the Firestorm to a first-half comeback against Wayland Baptist in the first round, Wednesday. ACU trailed by sixteen points just over seven minutes into the game but fought their way to a one-point lead to end the half.

The second half would see the Firestorm trail again. This time, the defense showed off down the stretch holding the Pioneers to 27.5% shooting from the field in the final 20 minutes. Wayland Baptist stayed alive by scoring 21 points off 20 Firestorm turnovers and 17 second-chance points coming from 23 offensive boards.

The Firestorm defense held the Pioneers at bay swatting eight blocks and pulling down 31 defensive rebounds. The senior from Coventry, England, Callum Lawson, stepped up, leading the team with 23 points and 11 rebounds, securing his 15th double-double of the year.

ACU pulled away, leading by as many as 12 points to complete an 81-73 upset over the second seed in the Naismith Bracket marking the first national tournament win for ACU since a victory against William Carey College (MS) in 2016.