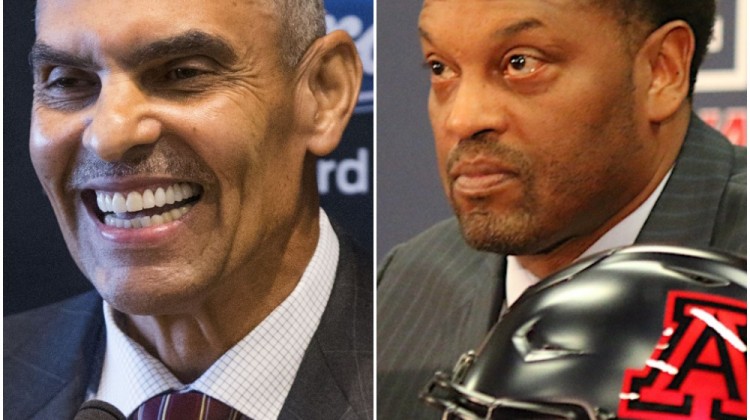 If anyone knows the highest of highs and the lowest of lows in college football, it’s Rick Neuheisel. While the Arizona Hotshots head coach is preparing for his first season on the sidelines in Tempe, the CBS College Football Analyst is also keeping close tabs on both Arizona State and Arizona who appear to both be playing their best football heading into the stretch run of the Pac-12 season.

The schools two new head coaches are also silencing their rather boisterous critics.

“Let’s just say this, when people scoffed at the Herm Edwards hire,” Neuheisel said to Sports360AZ.com’s Brad Cesmat in a phone interview earlier this week. “They have to eat their proverbial hats today because it’s the Sun Devils as the only team in the south that control their own destiny. It has been remarkable to watch.”

Neuheisel points to the Sun Devils (5-4, 3-3) consistency on both sides of the ball and Edwards approach to making both side of the ball “more NFL-like.”

“I think it’s remarkable,” he said.

ASU will look to build on this positive momentum when they host UCLA on Senior Day Saturday afternoon in Tempe.

Meanwhile, in Tucson, Kevin Sumlin’s Wildcats (5-5, 4-3) are on a modest two-game win streak and, like ASU, one game from bowl eligibility heading into their bye week.

And that’s how you start a weekend off! #BearDown pic.twitter.com/CrfOAXGF2F

“I’d given up on Kevin Sumlin and the Wildcats,” Neuheisel explained to Cesmat. “That win two weeks ago against Oregon…I thought was maybe as shocking as any game I’d seen all season long in college football.”

“Both of those guys deserve big accolades,” he said.

They’ll meet for the first time in three weeks when ASU heads to Tucson for the annual Territorial Cup.

The game could be a much bigger matchup than anyone could have predicted a month ago.