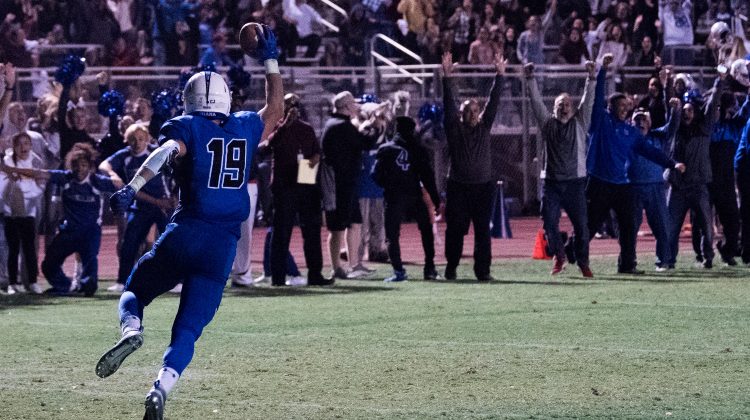 Friday night’s Semi-Final action between the No. 5 seeded Highland Hawks and the No. 1 Chandler Wolves was high school football at it’s best.

Chandler’s touted defense, that has dominated all season, wasn’t too overpowering for Highland, who outscored the Wolves in the first three quarters and was able to keep it close in the fourth quarter to force overtime.

Chandler would get the last word in OT, however, as they went for two and got the 36-35 win to advance to their third straight State Title game.

“They played with a lot of heart,” Chandler head coach Shaun Aguano said of Highland. “What holes were opened up, they closed it quick. They were playing fast, they did a great job against our offense. Defensively, their offense kept us at bay too. It was a whole team effort that Highland put together to keep that close.”

Chandler got the scoring going quick in the first quarter as senior quarterback Jacob Conover found senior tight end Brayden Liebrock in the end zone in the Wolves opening drive.

Highland responded in their next drive powering down field, but would settle for a field goal by senior kicker Austin McNamara.

In Chandler’s next possession, a fumble recovered by Highland at their own 25 yard line set up a scoring drive, with senior ATH Kohner Cullimore rushing in for a TD, giving the Hawks the lead in the first quarter.

In the second quarter, the Hawks’ defense was able to stifle Conover and the Wolves’ offense to take a 13-7 lead into the half.

In the second half, Chandler came out fast with a rushing TD by Jaheim Brown-Taylor in the Wolves’ first drive to edge ahead 14-13.

Chandler would intercept Highland senior quarterback Kaleb Herbert on the Hawks’ next possession, but Highland took it right back with an INT of their own by senior Dayton Huffman.

The Hawks were able to do what Chandler wasn’t on the turnover and capitalize to put themselves back on top 20-14 going into the final quarter of regulation.

Cullimore lines up at QB rushes in for 2 pt. conversion. Even at 28 with under 2 min. left. #FridayNight360AZ pic.twitter.com/kIKP0Dtq3F

In the fourth quarter, Chandler scored 14 points to stay in it and led Highland 28-20 with under two minutes to play.

Herbert set up the drive with a long run then was able to run in for the TD and the Hawks lined up to go for two. Cullimore went in at QB and found the gap to score, evening the game up at 28 and forcing overtime.

Highland had the first possession of OT and scored easily. Chandler did the same.

As the Wolves lined up to kick a field goal in overtime, Highland head coach Brock Farrel ran down the field to call a timeout. After the timeout, the Wolves’ lined up to go for two.

Conover connected with Liebrock in the end zone and the conversion was good giving Chandler the 36-35 OT win.

“We were going for the two,” Aguano said. “I was running down the sidelines to call a timeout, he (Farrel) just beat me to it. (We were) just playing for the win. I trust our kids and we practiced that. If we were going to get it and win like we did…I wanted to go down swinging with my two guys in Jacob and Brayden.”

The 6A State Title game will be a re-match from last year with Chandler taking on No. 6 seeded Perry at Sun Devil Stadium on December 1. Perry beat Pinnacle in the other side of the 6A Semis, 45-14 to advance.