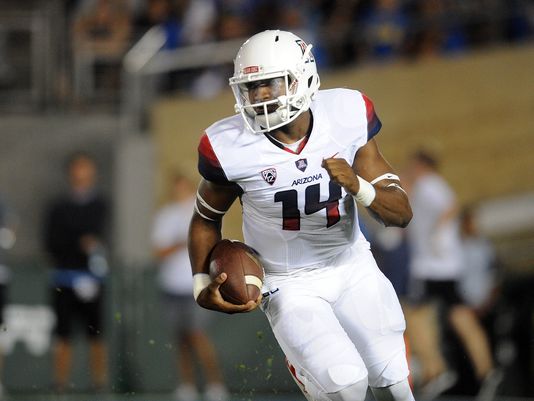 Should Kevin Sumlin sit down quarterback Khalil Tate? ESPN reported during Saturday nights loss to USC, that Tate has been limited in practice with a gimpy left ankle “That’s true”, Sumlin said Monday afternoon.  Tate suffered the injury early in the Wildcats loss at Houston on September 8th.”We’re never going to put anybody in harms way”.  He hasn’t looked the same since. Sumlin confirmed that the injury and limited practice time have impacted the Arizona playbook. “it’s affected it, I cant give you a percentage of that”. With the Wildcats facing California this Saturday night in Tucson, Sumlin indicated that the backup quarterbacks will take reps in practice. “We’ve got guys that are capable to play”.

Backup quarterback Rhett Rodriguez drew praise from Sumlin on Monday. “In games he’s played in , he’s been effective, on the field he’s done a nice job, he’s moved the ball when he’s been in”. Rodriguez has appeared in two of the Wildcats games here in 2018, completing 6-7 passes.

Arizona has seven quarterbacks listed on their roster. With the new redshirt rule in place, a player can appear in up to four games before their redshirt status has expired.

As for holding Tate out against Cal, Sumlin addressed the situation this way, “That decision is not made on Sunday or Monday”. Stay tuned…