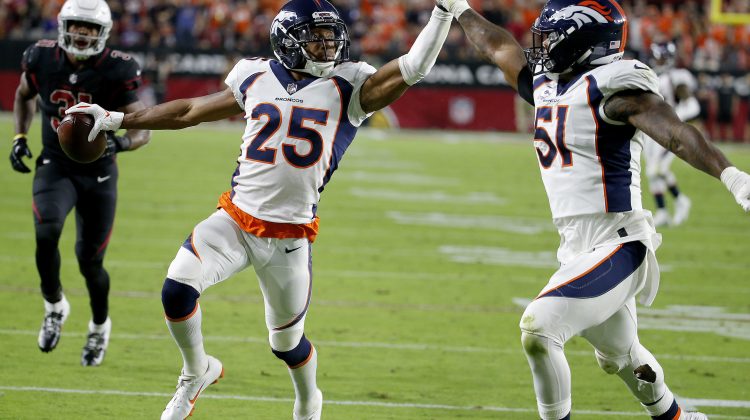 Denver Broncos cornerback Chris Harris (25) high fives linebacker Todd Davis (51) as he scores a touchdown after an interception against the Arizona Cardinals during the first half of an NFL football game, Thursday, Oct. 18, 2018, in Glendale, Ariz. (AP Photo/Rick Scuteri)

The Arizona Cardinals returned to their State Farm Stadium nest and were blown out by the Denver Broncos 45-10 on Thursday Night Football in Glendale. With the loss, their worst at home since 2003 (a 38-0 shutout to Seattle), the Cards drop to 1-6. Denver improves to 3-4.

Lost Season…Thursday was a rather fitting cherry on top of seven weeks of ineptitude. “Definitely embarrassing effort tonight,” a dejected Steve Wilks said afterwards. “Our fans deserve better than that…unacceptable. Disappointment is there but we have to move on real quick.” The first half featured a smorgasbord of gaffes including two pick six’s, receivers quitting on routes, a busted secondary coverage which resulted in a touchdown, a defensive penalty in the end zone and another one on special teams. The Cardinals scored their first third-quarter points of the season when Josh Rosen connected with Larry Fitzgerald on a four-yard scoring pass. The “good news” is the San Francisco 49ers, the only team Arizona has beaten, is in town next Sunday.

Nightmare Start…Seems only fitting with Halloween less than two weeks away, right? Linebacker Todd Davis snatched a tipped Rosen pass and rumbled 20 yards for a touchdown on Arizona’s second offensive snap, moments after the Cards burned their first timeout. The Bird Gang went three-and-out on their second possession. Six plays and 77 yards later the Broncos had a quick 14-0 lead.

Same Story, Different Week…No way of putting lipstick on a pig when it comes to the Cardinals’ third down conversion rate. They followed up their 0-10 effort last week against Minnesota with a 0-7 first half. They finally broke the streak on a 14-yard scramble by Rosen into the red zone on third-and-10 midway through the third quarter.

Mystery of Nkemdiche…Robert Nkemdiche, per the Cardinals’ release and official depth chart, was scheduled to start at nose guard but didn’t. In fact, he didn’t play a single snap until the second quarter and finished with one solo tackle. To say the Cards’ 2016 first-round pick has “shown flashes” is generous at best. Much like at Ole Miss, he’s been undisciplined against the run and with gap integrity inside. The organization has been patient but when much is given, much is expected and Arizona, to this point, has gotten little return on their investment.

Now What?…Arizona enters the “mini bye” with far more questions than answers. Could answers be coming sooner than later? “That’s premature,” Wilks stated. “To talk about changes right now. We’re all going to be evaluated.” Ah, to be a fly on the wall of Michael Bidwill’s stadium suite and hear his in-game conversations with General Manager Steve Keim as the overall product melted down again. The wheels are certainly spinning in what could make for an interesting Friday at the Cards’ headquarters in Tempe. At this point, the organization has really nothing to lose.