Tis the season for elimination! The state tournaments have arrived, and the west side has some heavy hitters across the conferences. Below, we have every game that a west valley school will be in and how many schools of the six tournaments are from the west side. Let’s jump in and read up on these marquee matchups.

The 6A Conference has the least amount of west valley schools, and two will face off in the first round.

Westview took this year’s Southwest Region championship behind senior, Albert Curry, who has averaged nearly 100 rush yards per game. Senior, Sebastian Knox has held down the defense leading the team with 99 tackles and included an INT and a few fumbles causes.

Both these teams are examples of what eleven weeks of football can do to a team. Both Curry and Knox have missed games this year, making seniors like Jacob Olivas being next man up.

Even though Liberty has busted out to an astounding 9-1 year putting them in the top four in the 6A Conference, the Lions have had their own share of the injury bug. Junior quarterback, Jonah Guevara, was down in two close games against Sandra Day O’Connor and Chaparral.

Even with senior, Jett Kinsch being as solid as ever, the defense has stepped up with freshman, Jax Stam, making a name for himself by pulling down three interceptions and 44 season tackles. The youngster in the secondary has helped senior Cal commits, Braxten Croteau and Ryan Puskas, who lead the team in tackles along with Croteau’s seven sacks.

Defense will be the key for Liberty to make a run in this year’s tournament but watch out for the Westview offense. With enough consistency, the Knights can put up a good fight against Liberty in this first round match.

Panthers on the Rise

The Peoria Panthers were in tiptop shape against rival, Cactus, last week with senior running back, Juwaun Price, scoring five touchdowns. Tiptop shape is exactly what they’ll need to be to prove they belong in the final four teams in the conference likely alongside Scottsdale Saguaro, Salpointe Catholic, and Desert Edge.

@PeoriaPantherFB RB @juwaun_32 revs up the engines and cruises to a 74-yard TD on the very 1st play from scrimmage. Peoria leads 6-0 @AZHSFB pic.twitter.com/aVbu8NNabT

While Juwaun Price has built up his 23 rush touchdowns this year alongside the electric Peoria rushing crew, junior QB, Kyle Samford, has proven to be a phenomenal second option nearly taking down Desert Edge with his airstrike. Tossing to senior, Jovon Scott, has been lethal at times, but watch the backfield just in case freshman rusher, Cameron Mack, blossoms this postseason.

The Panthers host Seton Catholic in the first round where they’ll have to stop senior quarterback, Vincent Wallace, who has thrown one yard shy of 2,000 yards in his ten games. Wallace has spread the love offensively, so versatile defenders, Micho Cordero, Gabriel Ocampo, Jacob Golden, and Alaa Barakat might be key to this season’s tournament run.

you know what it is ? pic.twitter.com/Sfxwv95icQ

Trying to Stop the Coyotes

To say Centennial has been dominant is an absolute understatement. The undefeated 5A Northwest Region Champs closed out the regular season with four straight shutouts while scoring over 40 points in each game. One of those teams that got shutout will have to step up to the plate again in the first round.

The Sunnyslope Vikings finished the season at .500 with all their losses coming against schools ranked in the tournament. In their original meeting, the Vikings got shutout 49-0 but junior quarterback, Niko Haen, had a decent performance throwing for 175 yards and nearly 10 yards per completion.

The defense will stand behind senior standout, Jack Sanderson, who leads the team with ten sacks and 59 tackles. Stopping a backfield of senior, Tawee Walker, and junior, Jaydin Young, is a tall task after combining for 23 TD’s.

The most difficult part will be getting by the Coyotes defense with senior, Dylan Wampler, who’s accumulated three sacks, 83 tackles, and a couple forced fumbles. The biggest problem for any team that plays Centennial in the tournament will be stopping just one side of the ball, which no team has done this season.

Can’t tell you how much I appreciate this man. Love you brother! Its been a great ride with you from start to finish. ?✊?#SeniorNight @jacob_fyffe pic.twitter.com/247TkoXkmE

The Cactus Cobras dropped from number four to number seven following their loss to rival, Peoria, in a tight 4A Conference. They host Canyon Del Oro in the first round behind a healthy Anthony Flores and versatile Zaach Cullop. They’ve proved to be tricky on offense and expect more of that to shine in this tourney.

Thank you to the Brad Cesmat show on Fox Sports for having me on the AZaubibles section to talk about the season and playoffs! Thank you @JordyHamm @HaleySports360 for the opportunity! @Sports360AZ pic.twitter.com/drLbBKDlTt

It’s been a historic season for the Glendale Cardinals behind junior running back, Kevin Daniels, who has racked up 32 rush touchdowns, leading the state in that category. In front of Daniels stands a stout offensive line that has helped lead the Cardinals to one of their best seasons in their more than 100-year history. You can read more on this squad from Eric Sorenson.

One team that has skyrocketed up the ranks in the past few weeks are the Greenway Demons. Senior QB, Tyler Duncan, has racked up nearly 3,000 total yards behind a stout pass attack that has led to 23 Demon touchdowns. If the Skyline champs defeat Prescott in the first round, they’ll square up against a young West Valley champion in Desert Edge.

All gas , no brakes ⛽️ pic.twitter.com/idYSKYVGez

It’s time to fight for the right to party (and move on to the next round). Be sure to head out and support your team in these elimination championship games. Also, check out the Best in the West Podcast on Wednesday, and of course, don’t forget to use #FridayNight360AZ to join in on all the talk under the lights! 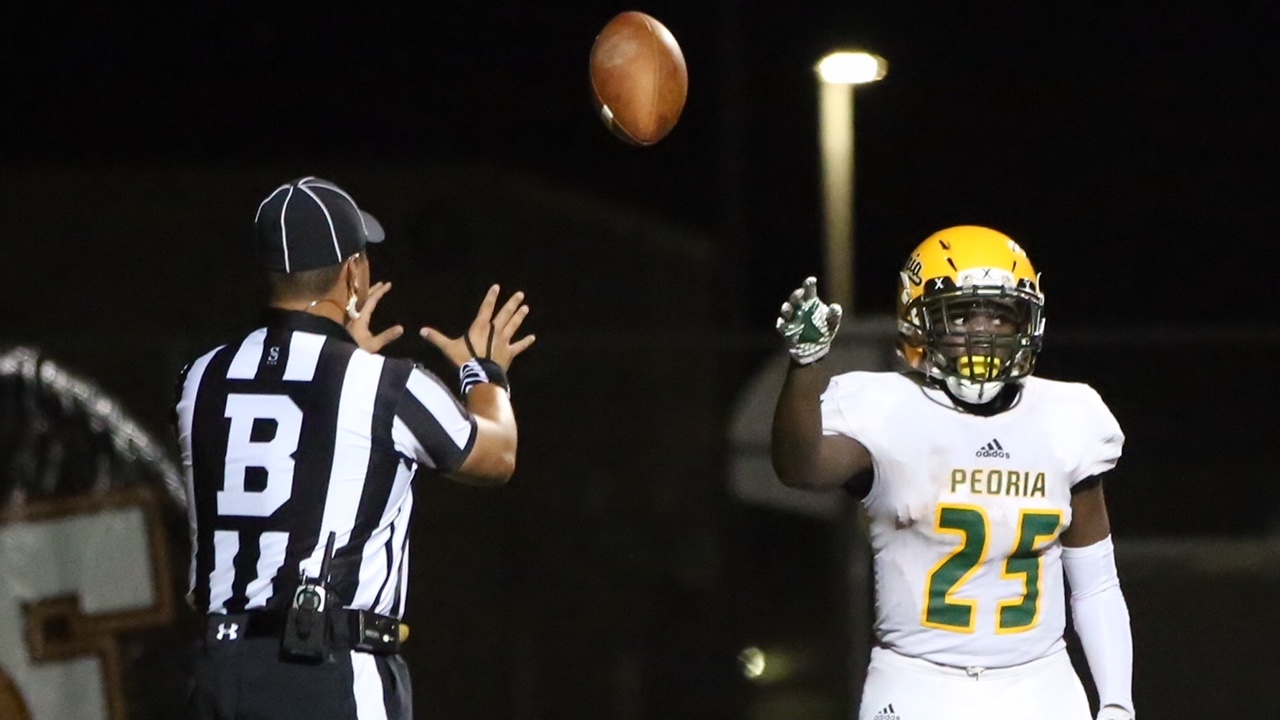