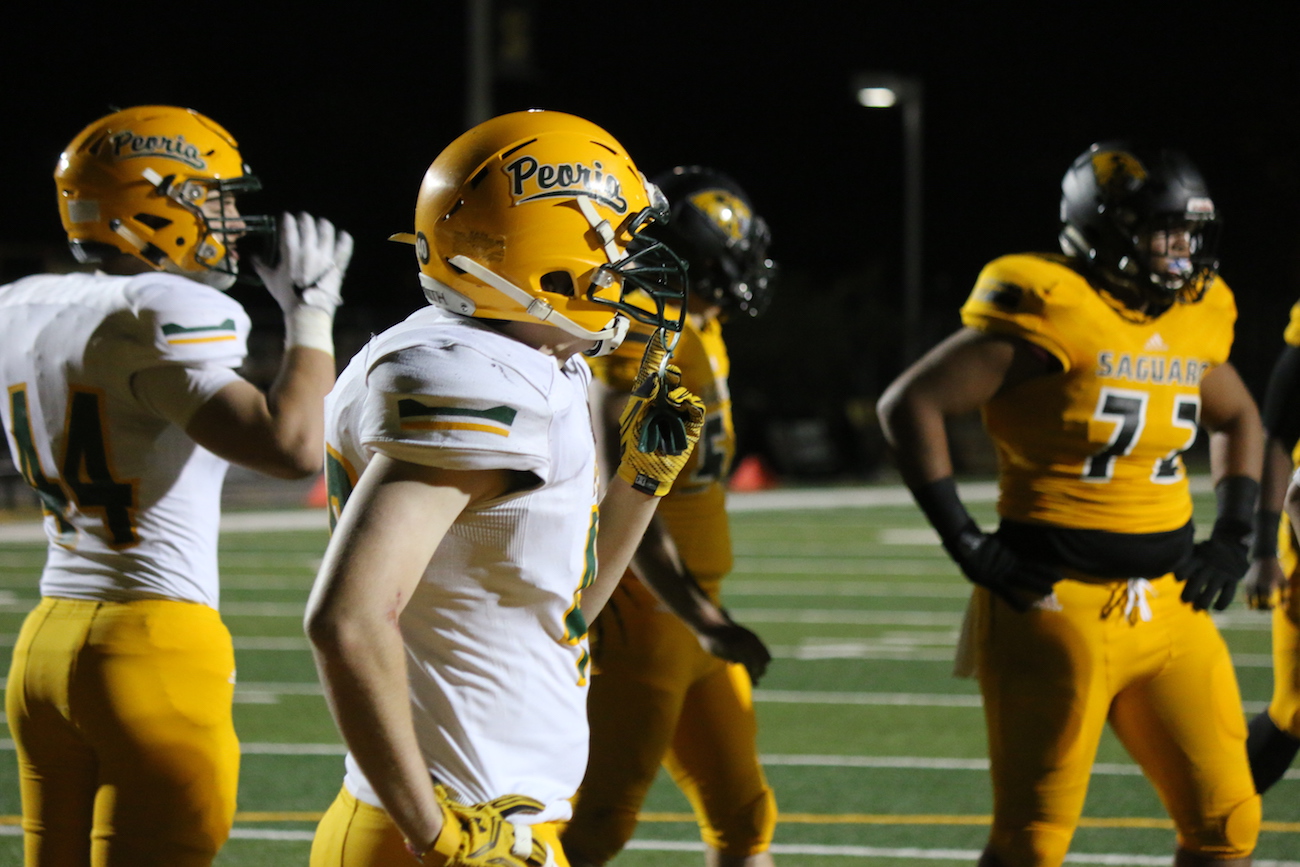 The standouts are beginning to form! A handful of west valley schools remain undefeated nearly halfway through the season. There are a few great west side matchups this Friday, and plenty of action around town, so let’s jump in.

The West Valley Region in the 4A Conference had always been a three-team battle between Cactus, Peoria, and Sunrise Mountain with SMHS typically stealing the crown in the final couple weeks. The Mustangs’ departure to 5A opened up the fight between Cactus and Peoria but brought a new challenger for the title, Desert Edge.

The Scorpions’ shift from 5A to 4A hasn’t been smooth, but a 3-2 record doesn’t do justice for how well this team has played. Their two losses came against 5A Millennium and 2017 4A State Runner-up, Salpointe Catholic, by a combined 11 points.

Desert Edge got back in shape last week against Poston Butte with a 40-7 victory. Senior quarterback, Tyler Henry, has been consistent throwing for over 100 yards per game, but the rush game has been the Scorpions’ secret sauce with three different players rushing for over 200 yards and three touchdowns apiece so far.

Meanwhile, Peoria currently holds one of the eight remaining perfect records in the 4A Conference following a tight 49-46 win against Thunderbird.

Westside star, Juwaun Price has been the heart of the offense for a couple years at Peoria and is responsible for nine rush TD’s on the year. The Desert Edge d-line has to stay on their toes because the Panther run game can be just as deadly as the Scorpions’.

Next to Price sits another senior running back, Malachi Potee, who has added seven more touchdowns on the ground for Peoria’s offense. This dual-weapon backfield has combined for over 1,000 yards and 18 touchdowns in their 4-0 season.

The key to the game will certainly be halting the opposing rush. Sophomore Cameron Steele has led Desert Edge’s d-line with five sacks on the season and 50 lost yards. Junior Gabriel Ocampo leads the Panthers with three sacks but has help around the edges.

Whoever wins this game will likely make their game against Cactus later in the season a type of, “Region Championship” game.

Typically, when a quarterback has an interception on the stat sheet it’s because they threw one. Devante Wimbish changed that narrative when the Ironwood quarterback caught an interception that would seal an Eagle win with only 2:16 left in the game.

While Wimbish’s clutch INT won the game, his 192 rush yards is what led the team to a 21-17 win at Barry Goldwater. The senior quarterback also caught two balls for four reception yards just for good measure.

The Wildcats became the first Dysart school to play all three sister schools in a row that started with a pounding of Dysart but ended with huge losses to Shadow Ridge and Valley Vista. Following a 42-0 Valley Vista shut out, Willow Canyon must regroup on defense and make Wimbish throw the ball.

The Wildcat defense has done a good job this season keeping the opposing ground game quiet but if they are successful against Wimbish the secondary must step up and contain any possible passes.

More Than a Basketball Score

In our third western matchup, Verrado takes a visit to a rejuvenated and hungry Sunrise Mountain coming off a 74-point performance. The Mustangs enter the easier portion of their schedule after starting their 5A season 2-2 with losses to Williams Field and rival, Liberty.

Verrado certainly faces an uphill battle. These two teams have a common opponent in Williams Field where Verrado was shutout 31-0 while Sunrise almost upset WFHS, only losing by four.

We all know Sunrise Mountain’s Keegan Freid can score, and apparently, he felt like reminding everyone again when he scored eight total touchdowns last Friday. Yes, eight. The Vipers must control Freid both on the ground and in the air just to have a chance to compete with the Mustangs. Of course, that is much easier said than done.

The Glendale Cardinals are enjoying their move down to the 4A Conference with a 4-0 start, their best start in long over a decade.

The rush game has kept the offense scoring with three players rushing for over 200 yards a piece. Junior, Kevin Daniels, has already racked up over 750 yards in only four games including 222 yards and four touchdowns in Glendale’s 42-13 rout of Younker last week.

Friday’s match against Walden Grove marks their final game before regional play. The Red Wolves have two shutouts in the last three games and look to test Glendale’s perfect record through a rush defense that has allowed only 92 yards in the last two games.

Want to Hear About Another Undefeated West Valley School?

The ‘Yotes of Centennial let Tawee Walker chill out on Friday as junior quarterback, Jonathan Morris, threw two TDs for 184 yards. Morris spread the love on offense with 11 different players rushing or receiving for yards.

The Coyotes would beat down Ironwood Ridge 43-12 and now hosts Millennium, who is coming off a 35-point loss to Higley. The Tigers like to run, but this Coyote d-line plays with force only allowing 286 total rush yards in their four games this year.

We hope the Coyotes’ two-hour bus ride back home was more comfortable than what they tweeted.

Wheew! Hey we made it!! Touch and go for a bit. But hey? We got it done!!! @CeHSathletics pic.twitter.com/m9B7Dc4AoD

For the first time ever, Pat Tillman’s alma mater, Leland (CA), visited the state of Arizona on Friday when they visited Liberty. Unfortunately, they were crushed by Lions 56-7. Talking to Leland coach, Mike Ward, and his players after the game, I was extremely impressed by the class, maturity, and love of the game this football family showed. It was an honor and privilege to host Leland. Liberty has a bye week but will head to San Jose to face Leland in 2019.

Chase Sazone our hearts are breaking for you, but we know your strength and courage will be the driving force behind your fight! When it becomes too hard to bear we’ll hold you strong.
“It is often in the darkest skies that we see the brightest stars.” @SazoneChase #WeFight ?61 pic.twitter.com/fIoFCxPpz6

There’s a lot of great action all around the west valley this week and plenty of good games. Be sure to head out and support your team, but don’t forget to use #FridayNight360AZ to join in on all the talk under the lights! 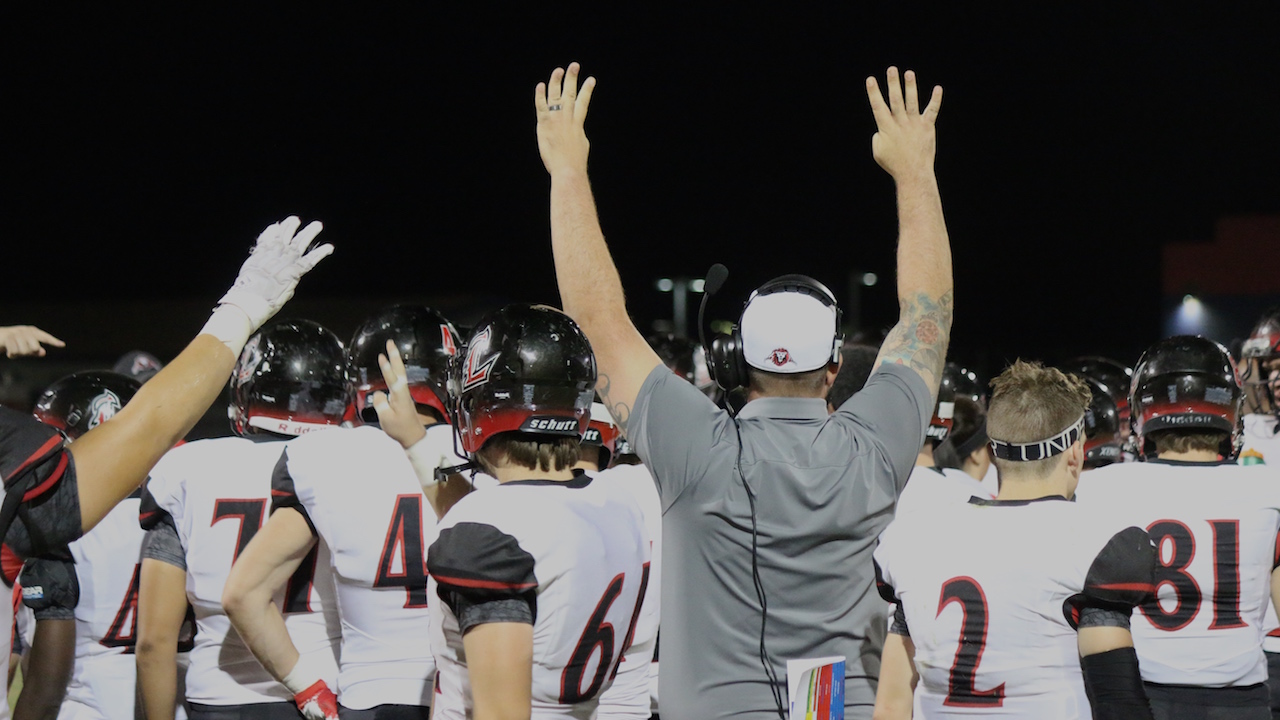 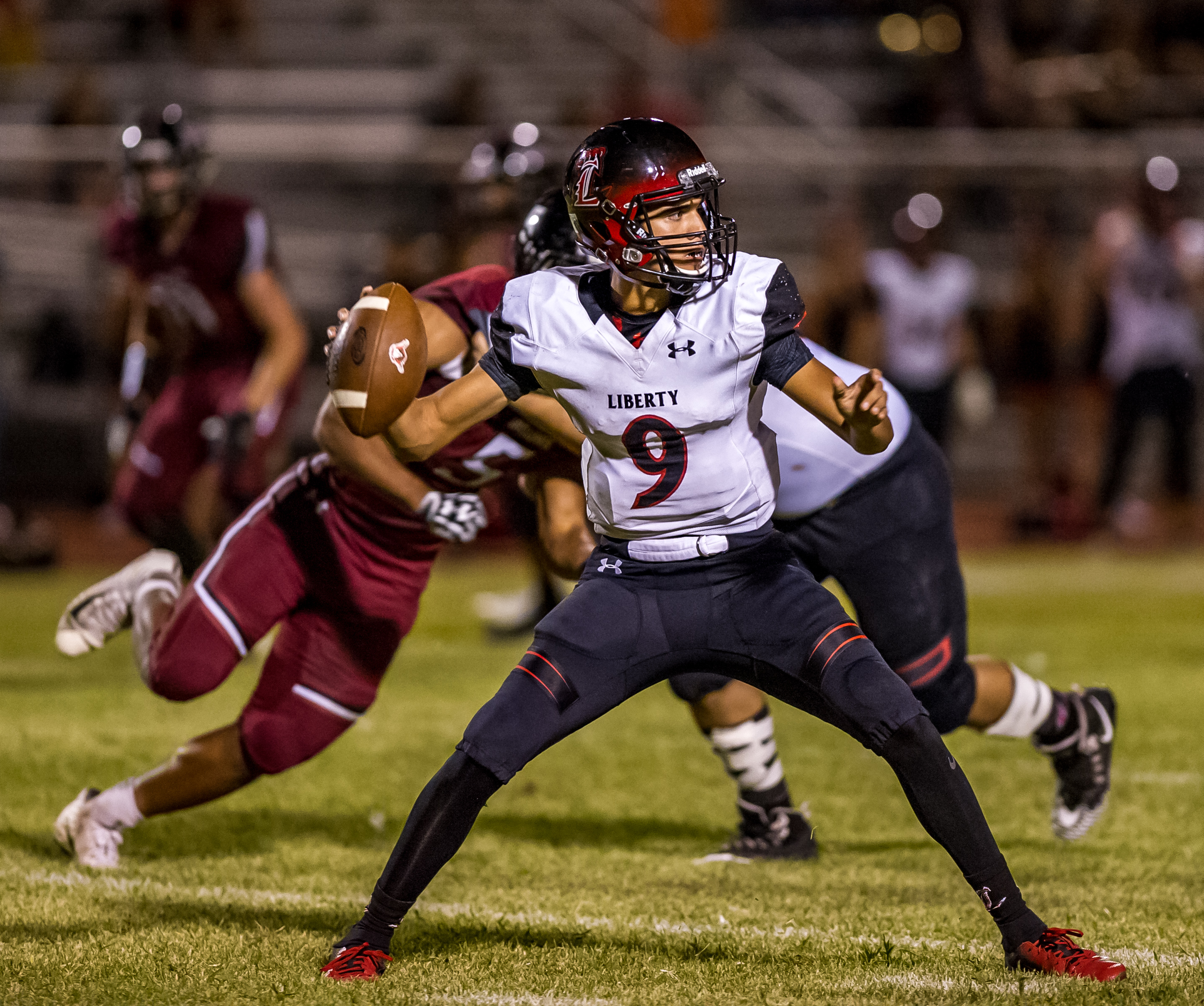 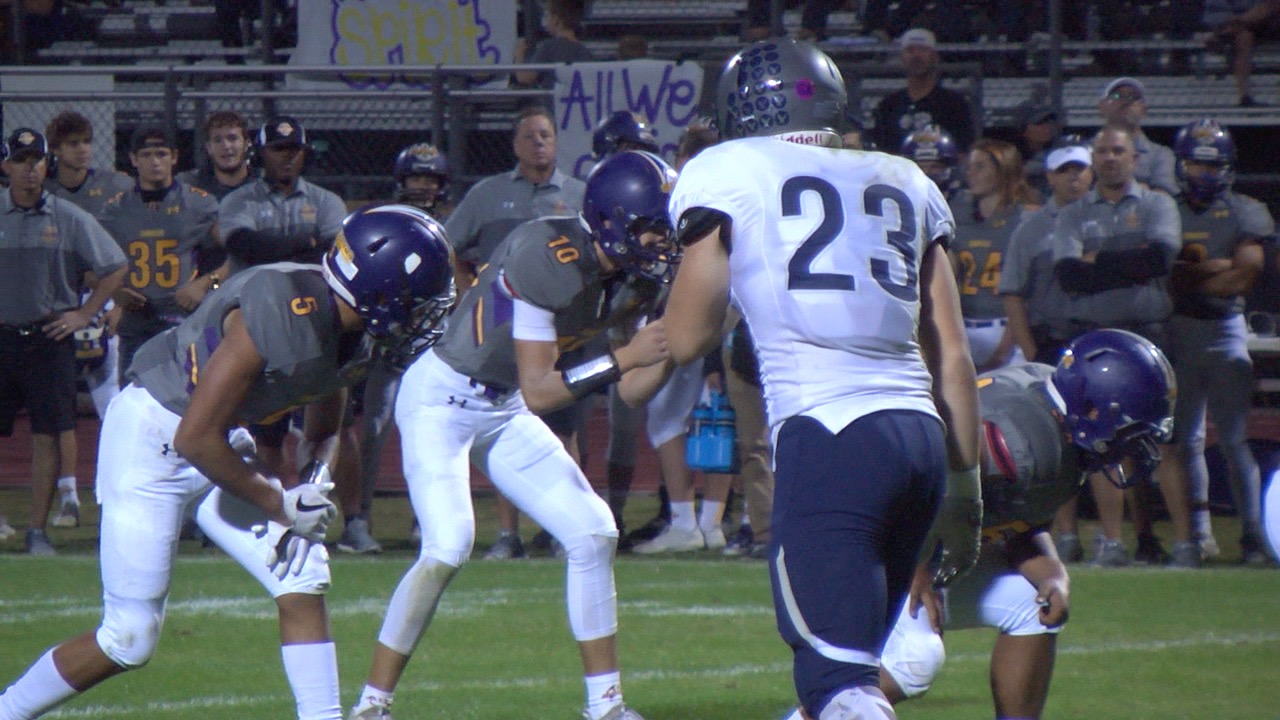 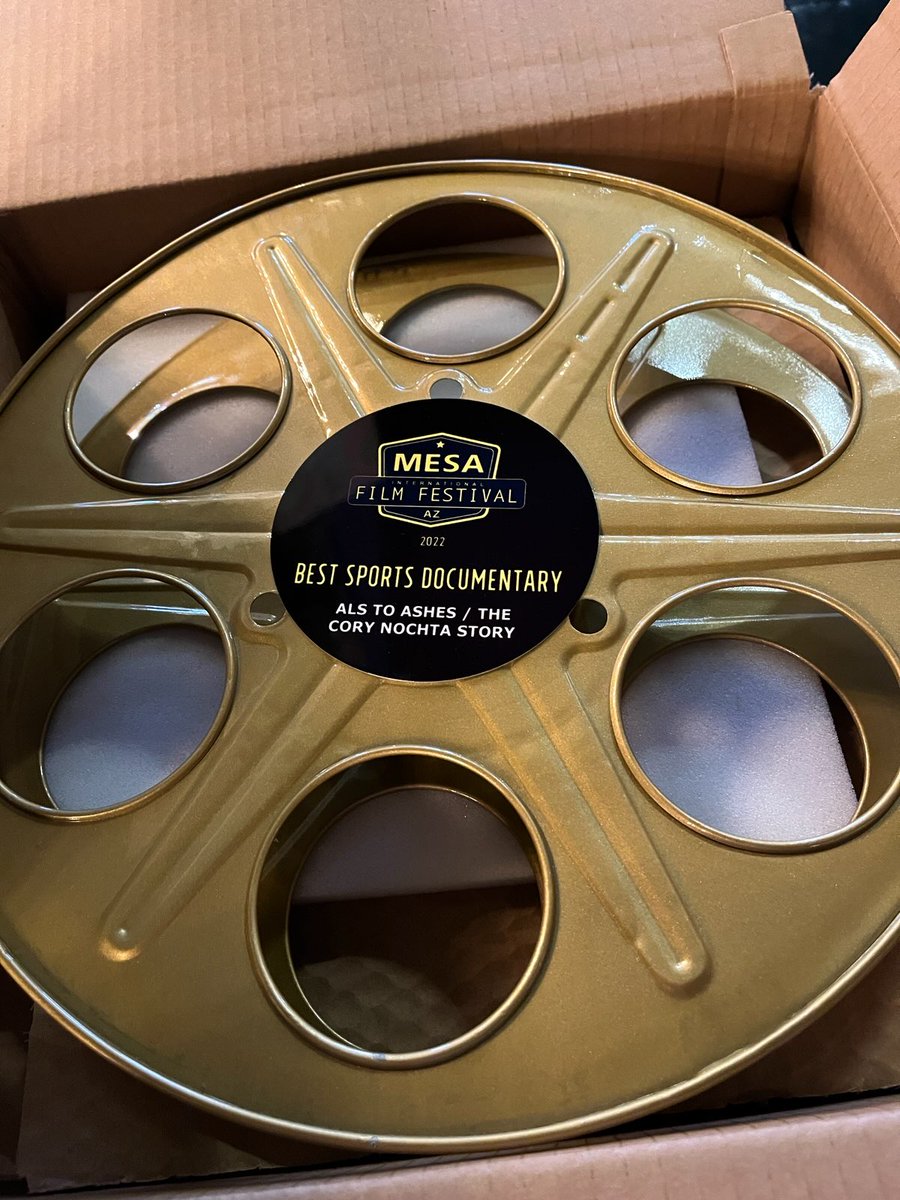