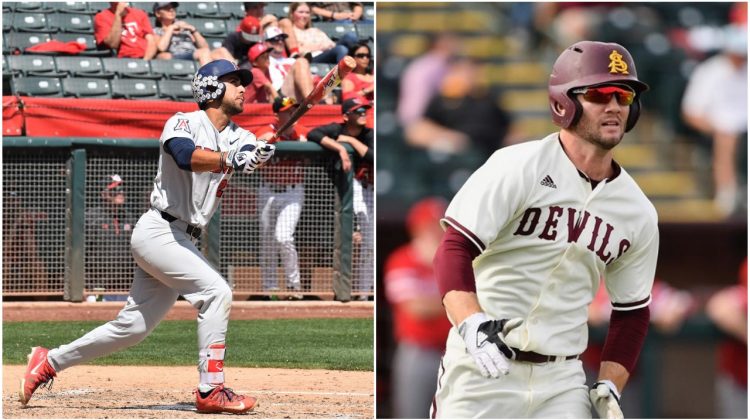 This week ASU hosts Washington, while Arizona hosts to No. 7 UCLA. Here’s what you need to know ahead of the action this weekend:

Arizona set to take on No. 7 UCLA

The Wildcats had a tough weekend after a series loss against Utah at Hi Corbett this past weekend. Arizona avoided the sweep on Sunday, however, posting season-highs in runs with 18, hits with 20 and extra base hits with eight.

We've now scored a season-high 18 runs after Morimoto scores on a wild pitch and Quintana scores on an RBI single from Fraizer.

That's 8 runs in this inning, which ties our season high.

Good guys lead 18-5. Robby Medel will take over on the mound after the stretch.

Alfonso Rivas had two home runs in Sunday’s win. Rivas went 2 for 4 with five RBIs and three runs scored. Matt Frazier, Seve Romo, Jacob Blas and Nick Quintana also helped lift the Wildcats to a win with their performances at the plate. Quintana hit his team-leading eighth home run of the year and tallied three RBIs on the day.

This weekend No. 7 UCLA comes to Tucson with a eight-game win streak. The Bruins moved up the rankings from No. 9 this week after a sweep of Cal Poly last weekend.

For Arizona, getting the bats going against UCLA’s pitching will be the key. UCLA has the fifth best team ERA in the country with a 2.78. After the struggles at the plate Arizona had for most of this past weekend, keeping the bats hot from Sunday’s high will be crucial.

ASU had a decent weekend in Corvallis, keeping the Beavers close in the last couple of games in the series. The Sun Devils got the win on Saturday behind big days from Gage Canning and Hunter Jump and a solid long relief outing from Dellan Raish.

Canning went 3 for 4 with an RBI, while Jump went 3 for 5 with a double and an RBI. Raish came on in the fifth and had 4.1 shut out innings where he allowed four hits with one strikeout earning his third win of the year.

EVERYBODY JUMP!!@hunterjumpp remains the hottest player in the Sun Devil lineup with this RBI double to put ASU back on top!

6-5, good guys, in the seventh! pic.twitter.com/AdsCyC5REm

Sunday’s rubber match was a back and forth battle, with the Beavers coming out on top. Gage Canning had his tenth three-hit game of the season going 3 for 5 with a double and two RBIs.

Against Washington, ASU will need guys like Raish and Eli Lingos to bring their best stuff and for hitters like Canning, Jump, Carter Aldrete and Lyle Lin to stay hot. The Huskies battled last weekend against Washington State, so they’ll be looking to get back to being more consistent in this upcoming series.

Both teams are coming off series losses, Cal to No. 2 Stanford, USC to Oregon. USC has come close to a few big wins this season, but hasn’t been able to get it done, while Cal has settled in some. The Cardinal was able to overwhelm the Golden Bears last weekend on Saturday and Sunday, but a big first game win on Friday due in part to one of the nation’s best hitters in Andrew Vaughan having a night where he went 2 for 4 with a home run and two RBIs, saved Cal from the sweep.

Utah came away with a big series win at Arizona last weekend, while Stanford got the series win against Cal. Stanford’s pitching sits at No. 2 in the nation with a 2.59 team ERA. Utah never ceases to surprise in conference play, but with the all-around solid lineup and pitching staff that the Cardinal has, it will be an uphill battle for the Utes this weekend.

Oregon State moved up the rankings from No. 5 with a series win against ASU last weekend. Washington State still sits towards the bottom of the Pac with a 6-12 conference record, 14-23 overall after a series loss to Washington this past week.