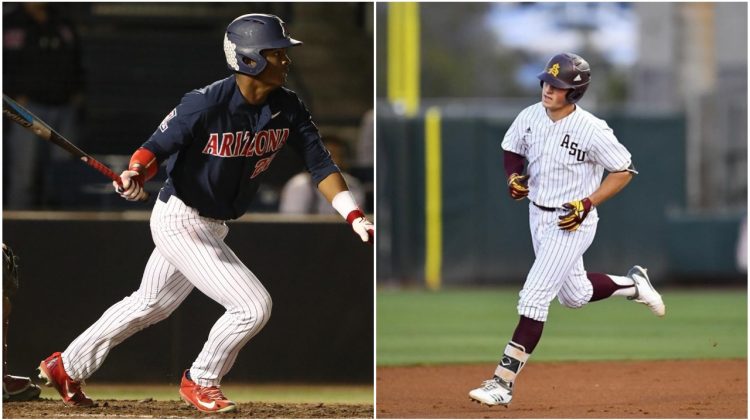 This week ASU travels to No. 5 Oregon State, while Arizona heads to Utah. Here’s what you need to know ahead of the action this weekend:

ASU at No. 5 Oregon State

The Sun Devil bats woke up in last weekend’s series against Utah. The Devils put up 35 total runs in the series to get the sweep of the Utes.

Freshman Spencer Torkelson hit his 19th and 20th home runs during the series. On Thursday, Torkelson was named to the USA Collegiate National Team. He is the 39th Sun Devil to be named to the team which will travel to two series in the U.S. against international opponents and one series in Cuba. Torkelson’s 20 home runs lead the nation right now, 10 ahead of any other freshman. The NCAA freshman record is 26.

While the bats may have clicked, pitching consistency still remains an issue for ASU. On Saturday, starter Sam Romero lasted only 2.2 innings and gave up five runs on three hits. Chaz Montoya came in and went 3.2 allowing two runs, one earned on four hits, then Spencer Van Scoyoc came in and went 2.2 with only two hits and five strikeouts.

The Sun Devils are young, but at this point of the year, it’s not a good sign to still see so much inconsistency.

The Sun Devils are in Corvallis this weekend taking on No. 5 Oregon State. The Beavers have gotten back their All-American second baseman Nick Madrigal who has already settled back in like he was never out. Madrigal went 5 for 11 with a triple and two walks in his first series back against Oregon.

Arizona put up a fight against No. 2 Stanford all weekend, but the Cats couldn’t hold on to early leads, and late big innings by the Cardinal bats, topped the Wildcats’.

ESPN’s Zach Clark spoke with Sports360AZ on Tuesday. Clark said while the sweep by Stanford was tough, the Wildcats are still fully in the postseason conversation if they stay consistent.

“Guys like Cody Deason have done a really good job and that was the question going into the season…the assumption was the offense would be great and the pitching would be questionable or at least we had some questions about the pitching,” Clark said. “You see guys like Nick Quintana, has been so much better lately, Jacob Blas, you’ve seen some of these younger guys really come into their own and then you have guys like Alfonso Rivas, a pre-season All-American who’s having a really good season.”

“For Arizona, it’s going to be about consistency,” Clark said. “They’re going to have to be better, especially on the road. Here’s what the good thing is for Arizona right now…they get Arizona State at home, they get UCLA at home, then they have to go to Oregon, there’s still time.”

Clark said he spoke to D1baseball.com’s Aaron Fitt recently and Fitt told him that he still has Arizona as a two or a three seed in the postseason.

Arizona will need to take advantage of the way the last month of their schedule is set up to stay in that postseason conversation.

Stanford head coach David Esquer is taking on his old team for the first time this weekend. The Golden Bears snapped the Cardinal’s eight-game win streak with a 4-3 win on Thursday to start the series. Cal’s big hitter, sophomore Andre Vaughan, who is the Pac-12 Player of the Week for the third time this season, will be the biggest challenge for the Cardinal pitching staff as he showed on Thursday going 2 for 4 with a home run and two RBIs. For the Golden Bears, they proved they can overcome Stanford’s best pitching as they bested one of the Cardinal’s best, Brendan Beck, to get things going. This will be a good next couple games.

Both of these teams are coming off of consecutive series losses. The Trojans were swept by No. 9 UCLA last weekend, while the Ducks were swept by in state rival No. 5 Oregon State. This series will be interesting as both teams have had an up and down season.

Washington is coming off of series loss to Cal, but finds itself towards the top of the Pac behind Stanford, UCLA and Oregon State. The Huskies will look to capitalize on the struggling Cougars to enter the final month of the regular season in a good position.