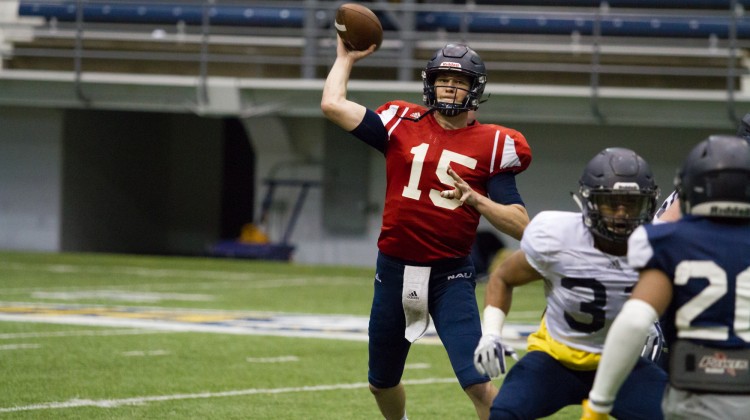 The Northern Arizona football team held its second scrimmage of the spring practice season on Saturday afternoon at the J. Lawrence walkup Skydome in Flagstaff.

The defense rallied for the win as it posted an 11-10 victory as it scored four of the final six points in the scoring format utilized during the competition.

The scrimmage opened strong for the offense as the Lumberjacks’ top two units squared off.  Junior quarterback Case Cookus hit senior Emmanuel Butler for a 60-yard gain and capped the drive by connecting with Butler a play later on a fade route from 10-yards out for the touchdown.

The No. 1 defense responded on the next set of downs with a three and out performance that featured a pair of sacks by sophomore defensive end Carson Taylor, who also provided a solid pass rush throughout the remainder of the scrimmage.

On the first series defensive back Anthony Sweeney also provided great coverage to keep the offense from picking up another first down in the opening match up of No. 1 units.

The No. 2 offensive and defensive units followed which saw the offense notch a point for a first down in its first series on a 15-yard reception by DJ Young.  The defense followed with some solid run defense and held the No. 2 offense short of 10 yards on the following set of down.

Highlights for the No. 2 defense included a sack and forced fumble by defensive lineman Seth Long and a huge tackle for loss by Brandon Lawless.  Markquise Simmons added a sack during the last set of downs for the second-team units, which marked the fifth straight three-and-out performance for the defensive sides combined.

The offense got back on track soon after as sophomore quarterback Connor Leavens found Luke Nguyen for a 20-yard gain before the scrimmage returned to the No. 1 units.