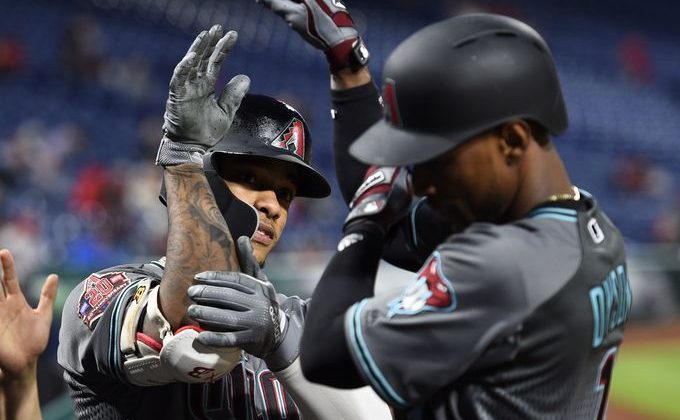 The Arizona Diamondbacks are the first National League team since the 1977 Dodgers to win their first eight series. The best record is held by the 2001 Seattle Mariners who had nine straight series wins.

Jarrod Dyson’s bat was hot in Philly this week. The outfielder went 4 for 11 with two home runs and three RBIs in the series.

Dyson helped get the D-backs off to an early lead on Thursday with a two-run homer in the first inning. Nick Ahmed and David Peralta also had home runs in the 8-2 win.

Alex Avila had himself a night on Tuesday, when he went 3 for 4 with a home run and two RBIs.

Koch does it all

Matt Koch earned the win in his second start with the Diamondbacks on Thursday. Koch went six innings allowing two runs on six hits with four strikeouts. He flashed his leather with a no-look snag and got his first MLB hit in addition to getting the win.

6 innings of 2-run ball, an #SCTop10 play on the mound, his first @MLB hit, and most importantly, a W.@Mattykoch20 is having a pretty great Thursday. pic.twitter.com/Xa2Rl0iAiS

While Patrick Corbin, Zack Godley and now Koch have had solid starts to 2018, it seems that Robbie Ray and Zack Greinke have yet to hit their strides.

On Tuesday, Ray went 4.2 innings allowing three runs on five hits. He had 11 strikeouts. Greinke got his second loss of the year on Wednesday in a battle with Phillies’ Jake Arrieta. Greinke went six innings, but gave up a 3-run shot to Phillies’ outfielder Aaron Altherr in the sixth to give Philadelphia the lead, which would be enough for the win.

On Monday, Patrick Corbin was named the National League Player of the Week.

Tuesday, Apr. 17, Corbin pitched his first career shutout against the Giants holding San Fransisco to one hit across nine innings with nine strikeouts. In his next start on Sunday, Apr. 22, Corbin had another dominant outing, going six innings and allowing two runs on two hits, including a home run, with 11 strikeouts.

The honor is Corbin’s first of his career. The last D-back pitcher to get the NL POW was Robbie Ray in August 2016.

Corbin’s next start will be against the Nationals on Saturday.

Jake Lamb has gotten back into his rehab after being shut down for a few days with right elbow tendonitis. Lovullo said on Wednesday that he hit in the cages and did some fielding stuff and would begin a light throwing program on Thursday.

Steven Souza Jr.’s rehab for his strained right pectoral muscle is going well. Souza had Wednesday off and will continue to get back into throwing at longer distances this weekend.

The Diamondbacks will head to Washington D.C. to take on the Nationals this weekend. Probable starters for the series are Zack Godley on Friday, Corbin on Saturday, and Robbie Ray on Sunday. On Friday, Godley will match up with Stephen Strasburg.