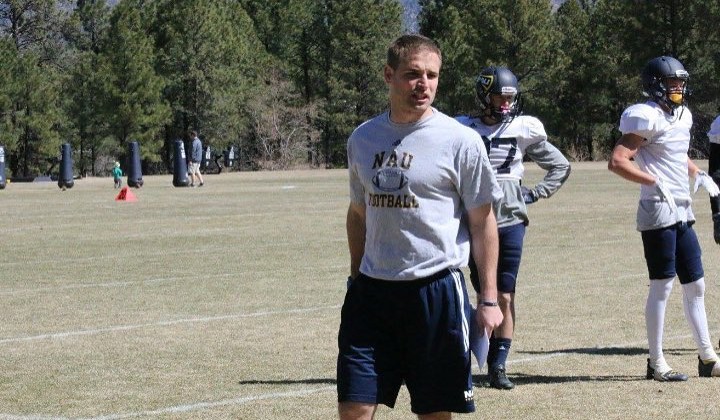 Initially the offensive coordinator at Phoenix College in 2015, Pflugrad has had experience leading the University of Montana football team to an 18-7 record in 2010 and 2011 seasons. He was a semifinalist in 2011 for an award presented to the national top FCS Football coach; the Eddie Robinson Award.

In 1980, Pflugrad started his coaching career as an assistant at Portland State before moving on to Arizona State as a wide receivers coach and recruiting coordinator (1995-00). He also held a few positions at Washington State for five years and coached the wide receivers at Oregon (2006-08).

“When I was coaching at ASU, I could tell he had a great passion for the game,” Robin said about his son Aaron to Sports360AZ. “He wanted to come to practice every day.”

While Robin was coaching at Arizona State, Aaron decided at 6-years-old he wanted to play for the Sun Devils. Former Head coach Bruce Snyder allowed Aaron to run routes and catch passes from record-setting quarterback, Jake Plummer, every Thursday afternoon.

Aaron also sat in on his father’s recruiting calls, such as Todd Heap and Terrell Suggs. “I think he learned a lot and maybe he didn’t even realize how much he was learning just because of the passion he had in the game of football,” Robin Pflugrad told Sports360AZ. He says he’s very proud of his Aaron’s career in football.

Aaron Pflugrad held the wide receivers coaching position for the previous three seasons at NAU and has since been promoted to offensive coordinator.

The former NAU wide receiver’s coach first started his coaching career as a graduate assistant at Arizona State (2012-15) after playing football for the Sun Devils (2010-11) and the Oregon Ducks (2007-09).

The National Football Foundation deemed Pflugrad as a semifinalist for the William V. Campbell Trophy, awarded to the American college football player with the highest academics, community service, and football performance. Like father like son.

Robin did coach his son at Oregon State, but the two never seen this coming. “I think when we did talk about the NAU situation, after we got off the phone I chuckled because I said ‘how many guys would want to hire their father?’” Robin Pflugrad laughed.

Aaron Pflugrad said he spoke with former players his father coached and found they all think really highly of his father. Aaron told Sports360AZ, “I think that has more to do with him always being there for them as people above anything that has to do with football.”

“We are really excited to have him and for our group to take that next step with him as wide receivers coach,” Aaron Pflugrad said.

NAU head coach Jerome Souers has known the Pflugrads for years. Robin Pflugrad and Souers were in the sixth grade together at Howard Elementary in Eugene, Oregon. The two have always had a good relationship.

Over the years, they’ve coached together at Portland State and the University of Montana, and even against each other when Pflugrad was at Montana and Souers moved on to NAU. Pflugrad has always respected Souers on and off the field.

Robin said that coaching with his son was the number one reason he took the job because he never knew when this opportunity would come around again. He added, “I still wanted to learn and grow in the profession and I think at NAU I will have a better ability to do that.”

There is some family-friendly competition in the air since Robin has stepped into Aaron’s former position. “He’ll probably say ‘well last year we caught 15 passes against this defense, how come we only caught 10 this week?’’ Robin Pflugrad said jokingly. “I’m sure there is going to be some of that and I expect it and I think it will be a lot of fun.”