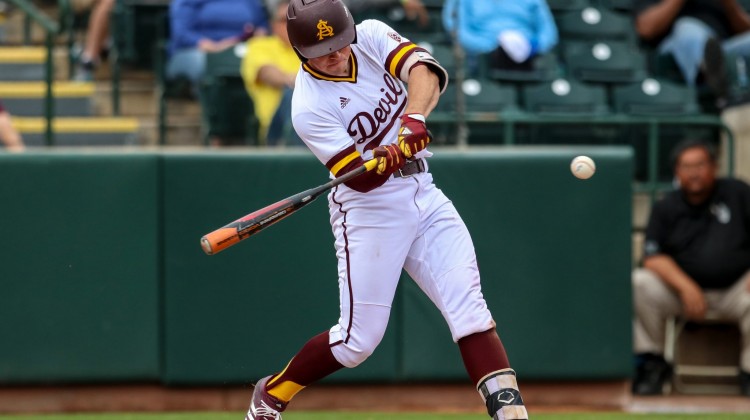 Arizona State freshman infielder Spencer Torkelson is on the verge of making history.

On Saturday evening against Oregon, Torkelson hit his tenth home run of the season, putting him one shy of Barry Bonds’ rookie home run record of 11, set in 1983.

In high school, Torkelson had a career total of 11 home runs at Casa Grande High School in Petaluma, California. Now he’s looking to exceed that total in one season.

TORK BOMB, ANYONE!?!?@spennyt19 with his TENTH of the season. He needs just 1 more to tie Barry Bonds' ASU freshman record!

The freshman’s 10 home runs place him third in the nation behind NC State outfielder Brett Kinneman and Cal first baseman Andrew Vaughn, both with 11.

Torkelson’s power became apparent early in the season. He surpassed last season’s team-high six home runs in just 12 games. Despite his raw power, however, Torkelson’s talent is more than just his ability to hit the long ball.

In 20 games Torkelson is batting at .299 with 18 runs, 20 RBIs and 23 hits. Sixteen of his 23 hits have been for extra bases. In the field, Torkelson has committed only two errors in 123 fielding chances, good for a .984 fielding percentage.

The power hitter could potentially tie and, or break Bonds’ record Tuesday night when the Sun Devils host UNLV before heading to Los Angeles to play No. 17 UCLA.