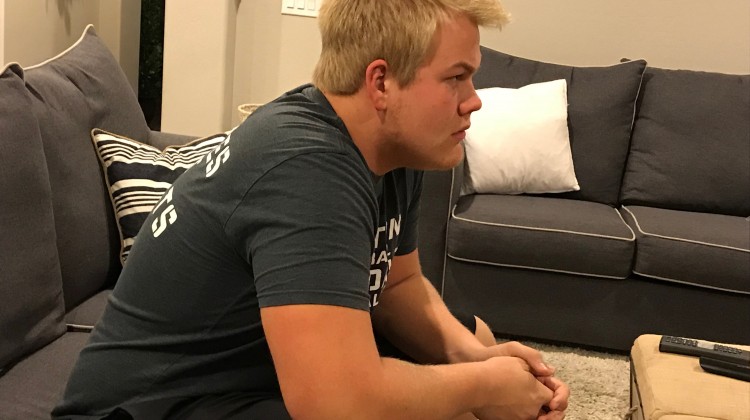 Hamilton offensive lineman and then-Arizona State commit Hunter Mayginnes thought he was calling Donnie Yantis, the Sun Devils’ recruiting coordinator, to set up an in-home visit. Instead, he received bad news he still finds difficult to discuss.
“Hunter, we don’t have a scholarship offer for you anymore,” Yantis told Mayginnes over the phone on Jan. 19 at about 2:30 p.m.

Mayginnes, who had been committed to ASU since July 2017, said Yantis gave him two reasons for this. First, he was the only Sun Devil football commit to not sign during the NCAA’s new early signing period, which began Dec. 20. And perhaps more detrimental, Mayginnes took an official visit to UCLA on Jan. 13, and the program saw that as a red flag because they thought it showed he wasn’t 100% committed.

As he recalls the situation in his home in Chandler, Mayginnes has his head tilted down, shaking it from time to time.

“I was heartbroken,” Mayginnes said. “It was just tough hearing those words come out of his mouth, because when you hear it, it’s like, dang I’ve worked so hard for something and it’s just gone like that.”

Mayginnes said he took the official visit to UCLA for comparison reasons. After all, he’d committed to ASU when Todd Graham was still the head coach. He liked the idea of being the “hometown hero,” something Graham had frequently mentioned.

After Graham was fired, the coaching staff underwent major coaching changes. Herm Edwards was hired as the new head coach at the beginning of December. Upon offensive coordinator Billy Napier’s departure to Louisiana, wide receivers coach Rob Likens was promoted to fill the position. Then, offensive line coach Rob Sale followed Napier, and Dave Christensen was hired to replace him.

“I needed to feel out the staff,” Mayginnes said. “If I get a connection with the coaches, I’ll run through anything for them.”

Before the early signing period, Mayginnes met Edwards and liked him, but he hadn’t had the opportunity to speak face-to-face with Likens and Christensen. According to Cindy Hansell, Hunter’s mother, Christensen was in Missouri when he was hired.

Oddly enough, Mayginnes said Christensen contacted him a day before he received the awful news from Yantis. Christensen told Mayginnes he wanted to schedule an in-home visit for next week (this week).

Then Yantis delivered the blow a day later.

“I felt pretty stupid and I felt awful,” said Cindy, who said it was her idea to have her son visit UCLA.

Cindy said high school coaches she had talked to encouraged her to have Hunter use his allotted official visits. She said that Sale, still with the program at the time, didn’t discourage the idea of visiting other schools to confirm Hunter’s commitment to ASU. He said he trusted Hunter’s word about being committed.

When the time came, she called Yantis and was straightforward with their plans to visit UCLA.

“The only indication he gave (of it being a problem) was like, ‘Well, you know, it’s one of those things where if you have a girlfriend and you’re in a committed relationship and she wants to date other people, how would you feel?’” she says Yantis told her. “I said, ‘Well timeout, what if the girlfriend left town and changed parents?’”

Cindy said she had never heard of a college rescinding a football scholarship because the recruit visited another campus.

“Prospects trip all the time to different schools without consequence,” she said. “I was not aware this would be an issue and Hunter never decommitted, but was up front and honest with them”.

Cindy said she respects ASU and the folks like Yantis who are just doing their jobs. She just wishes the situation could’ve been handled differently. For example, if ASU would have told the family Hunter’s scholarship would be revoked if he visited another school, he never would’ve gone. She thought ASU had a nice facility, a good program and great academics that would help her son during his college career.

Before Cindy walked in the room and joined the interview, she was on the phone with a UNLV coach. Then she sat down at the table.

She mentions that UNLV offered.

“They offered? Hunter asks to confirm.

“Oh, sweet,” Hunter says with a tone of relief, understandable considering the time crunch he’s in now with National Letter of Intent Day on Feb. 7.

The move forward has begun. In addition to UNLV, Mayginnes has been in contact with UCLA, Boise State, Hawaii, Nebraska and junior college Arizona Western, which has already offered the 6-foot-5, 318-pound lineman.

Mayginnes is Catholic, something he said he bonded with Edwards over when he met ASU’s new head coach. He believes God has a plan for him. It may not be the one he originally thought, but he knows he must keep driving after hitting this bump in the road.

The process has been rough, though. Mayginnes is the oldest of four kids. His brother Dylan is a sophomore at Hamilton. He also has a sister who plays volleyball at Perry as a freshman.

This was Cindy’s first rodeo with recruiting, and she now says she wishes someone taught a class informing parents about how to handle their child’s recruiting process.

“Don’t verbally commit unless you’re 120 percent sure you’re going to that school, regardless of coaching changes or anything else, “ Cindy said when asked about what her advice to other parents about recruiting.

Mayginnes and his family have learned that lesson and many others in the past week alone. When people think of the early signing period and potential issues it could create, Mayginnes’ situation provides a perfect example. Regardless, Mayginnes said he just feels fortunate to still have an opportunity to play Division I football, even if it won’t be for his hometown school.

Asked how this situation will motivate him, Mayginnes shakes his head and smirks. He says he’s “balls to the wall.”

And what better outlet than offseason workouts?

“I’ve worked out my hardest this last week getting that aggression out, just trying to get myself better and prove a lot of these schools wrong,” Mayginnes said. “Especially ASU. No offense to ASU, but I think they made a big mistake.”