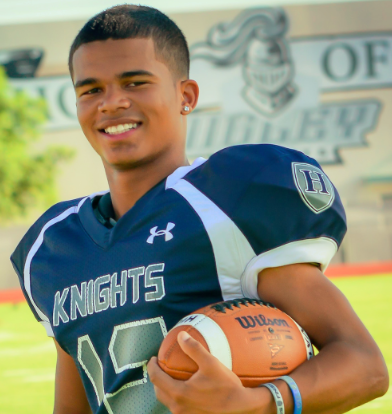 Higley high school gave an update tonight on the condition of Marcus Edwards.

Edwards is battling a brain tumor, but he also has the community’s full support.
The sophomore was having painful headaches and his football coach took notice during a yoga session with the team.
“Marcus was just lying there face down during all of it and it’s a 45-minute class,” Head Coach Eddy Zubey said to Sports360AZ.com. “He would try to get up and just go back down.”
At the end of the workout, Zubey asked Edwards what was wrong and Edwards said he had a “killer headache.”
Zubey said a few days later Edwards’s mother texted him saying her son had a brain tumor and was headed to the hospital where he’d receive emergency surgery.
The 15-year-old’s brain tumor is on his brain stem. “The tumor has a blood vessel so it’s alive,” Zubey told Sports360AZ.com. “It is growing but it has not spread.”

Edwards was monitored for nearly a week in the hospital before the surgery. The surgery was scheduled Friday morning and Edwards spent 48 hours in ICU.
The tumor won’t be deemed malignant or benign until after doctors conduct a biopsy.
Edwards is in stable condition and his best friend, Spencer Brasch, said, “He’s doing pretty good right now.” Brasch has visited Edwards every day and organized a prayer circle a two days before the surgery.
Zubey also attended the prayer circle. “It’s amazing to see the support,” he said. “The student body, the outside community and there was a fair share of non-Higley people that were there as well so that’s cool to see.”
Brasch said it was emotional at times but “everyone was there and strong for each other.”
Edwards’s twin brother, Isaac, has spent many hours in intensive care by Marcus’ side. Their older brother Adrian, who played for Higley three years back before becoming an Adams State linebacker, flew down to be there for Marcus as well.
“He’s a very athletic kid and always has a smile on his face,” Zubey told Sports360AZ.com. “He’s a smart player and he was our most athletic wide receiver on the JV level we had last year.”
Edwards was called up to varsity this past season during playoffs. After Edwards played in the first playoff game, Zubey called him into the coach’s office and said his player’s face just lit up.
Zubey said to Sports360AZ.com, “Pulling him into my office and congratulating him on a great sophomore season, and then asking him if he wanted to come up to varsity, I’ll probably never forget that moment with Marcus.”