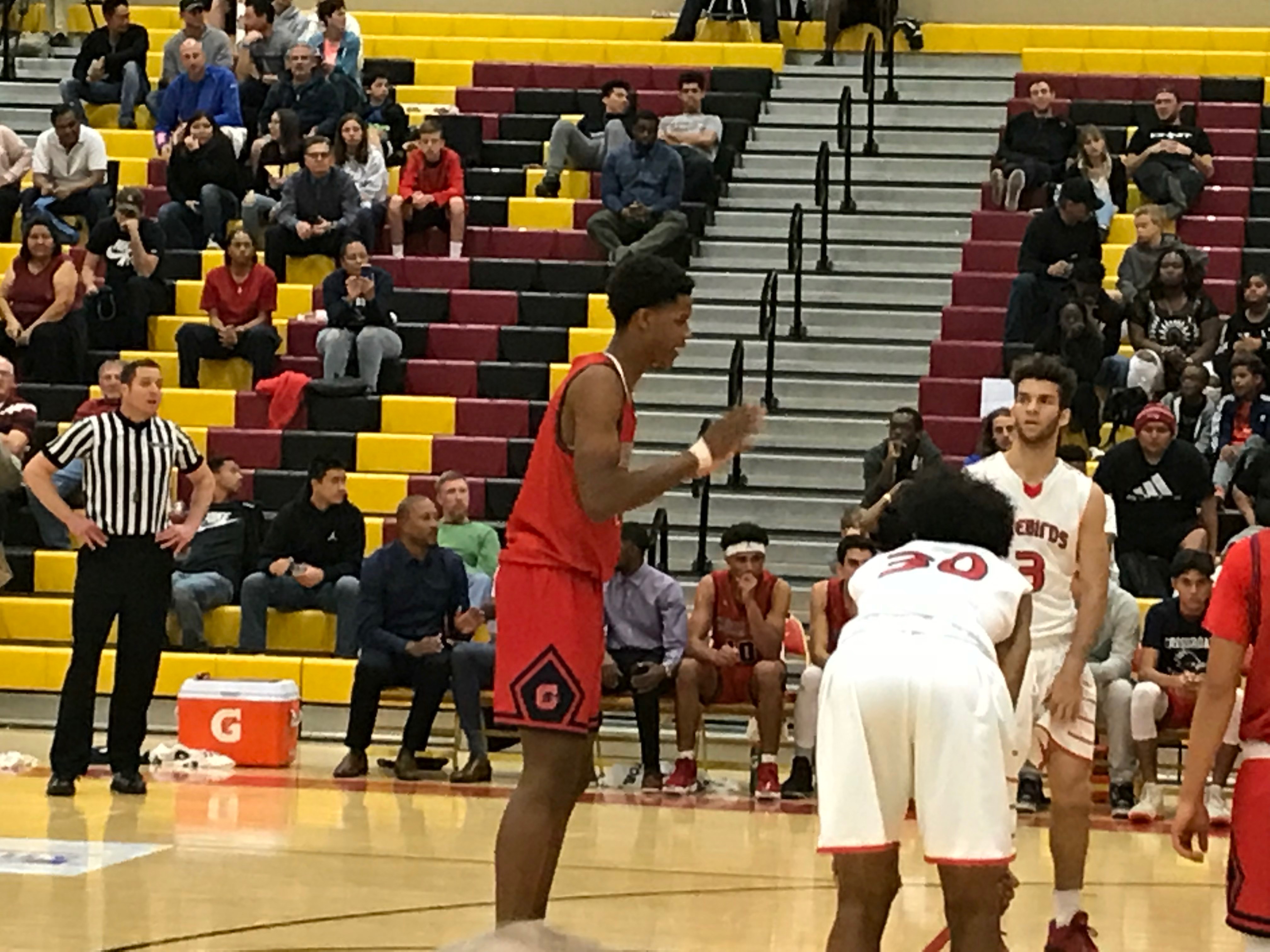 Shareef O’Neal attracts a ton of attention. Not only he is a 6-foot-10 stud big man for Crossroads High School in California, he’s also the son of an NBA Hall of Famer.

So, excuse him if he senses the magnifying glass.

“There’s some pressure just being Shaq’s son, but I got to get over that,” Shareef said after Crossroads’ 85-72 win over Chaparral in the HoopHall West tournament on Friday. “It’s just mental. I don’t really feel it anymore, I know what I can do. Having that name is a big part of my life. I just got to get over it.”

But that pressure is only because of the name itself. Shaq doesn’t seem to feed into it. He lets his son, an Arizona commit, be himself.

Anthony Davis, Crossrads’ head coach, said there are times when Shaq is in attendance at games and the moment gets bigger for Shareef. As any son would, Davis said, Shareef only wants to make his father proud, so he puts pressure on himself to do just that.

So before each game, Davis talks to Shareef to keep him focused.

Shareef is a 5-star prospect. He dominates on the court. If all goes well, he’ll be contributing in Tucson next season.

“He’s not just the son of a Hall of Famer, he’s one of the best players in the country,” said Davis, who added he used to only rank O’Neal with other California players before the forward’s play demanded he be put with the nation’s best.

He’s poised on the court. He plays with a control that must be calming for his teammates to see from their leader. He communicates, but he’s not loud-mouthed.

He admits that he talks trash on the court because, after all, it’s a part of the game. He never toots his own horn, though.

“Even if I know I’m the best player, I’m not going to say it because I’m not that kind of person and I feel like that’s a bad look,” O’Neal said.

Davis said O’Neal is coachable. Yes sir, no sir. Does whatever he asks. Last season, Davis was an assistant and the two bonded. After he was promoted, their relationship has only grown. Davis said O’Neal even pushes him to be better in practices and games.

Davis hasn’t had to worry about Shaq, either. He’s around, but not in a bad way. He sometimes stops by practice and helps the team install a few plays here and there.

But he isn’t telling Davis how to do his job. Or how good his son is. He isn’t in his ear at all. Instead, Davis said Shaq has told him that he doesn’t want to give him room to coach.

And with that space, Davis is preparing Shareef for the next level. Shareef said he liked Arizona because a big man can play like a guard, a concept the he was shown on a video during an unofficial visit. He feels like he fits into that system.

But Davis is readying O’Neal for something else.

“I know Sean Miller as a coach, he’s really aggressive,” Davis said. “So just really trying to get Shareef that grit in him because I know he’s going to get it from Sean Miller. So just trying to get on him to be that leader because he’s going to be a leader when he gets to Arizona, so I just want to implement the little things.”

Whatever he’s doing is working. O’Neal helps his team in many ways. He attracts so much attention, which creates space for others. He only had 14 points in Friday night’s win. He played a good game, but by no means was it an outburst of scoring. Still, his team won handily as he steadily dominated with his presence on both ends of the floor.

Yukki Okubo, a Crossraods guard, said O’Neal also guides his team through games. He politely corrects others’ mistakes and shows them how they can improve. He also takes ownership when he messes up. But he doesn’t act like he’s better than everyone else, which Okubo said is perhaps the best part.

“He’s nice to everyone,” Okubo said of O’Neal. “He’s a great kid off the court and on the court.”

It seems high school basketball is a sport now filled with more prima donnas than it’s ever seen. Recruiting rankings. AAU tournaments. You name it. The best players are showered in praise, treated like heroes. But they also appear to face an insane amount of pressure.

Shareef O’Neal is a breath of fresh air. He sees a need for improvement in his game. He’s a capable leader — not only because he’s talented, but also because he treats his coaches and teammates with respect.

All eyes are on Shareef, and while Shaq could make it worse by being a helicopter parent, he seems like the exact opposite.