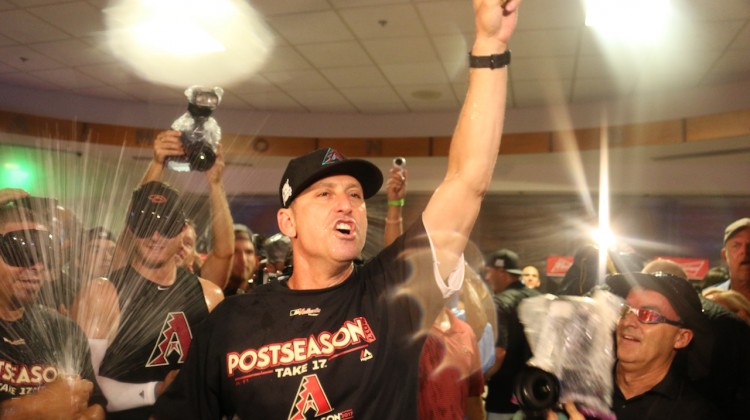 Torey Lovullo had a huge hand in the Diamondbacks’ turnaround in 2017.

The Snakes literally flipped the script from a 69-93 record in 2016 to 93-69, a National Wild Card berth and a division series.

Not bad for Lovullo’s first full season as a manager.

The turnaround was commemorated with Torey Lovullo winning the National League Manager of the Year on Tuesday. Colorado Rockies manager Bud Black and Los Angeles Dodgers manager Dave Roberts were the other two finalists.

Not bad for the National League West.

How's that for a rookie campaign?

Torey Lovullo is the NL Manager of the Year! pic.twitter.com/bSXHDUiqCY

Paired with general manager Mike Hazen in their debut seasons in the desert, Lovullo preached family, winning moments and love, and the Diamondbacks responded.

Whether it was shifting  Archie Bradley to an elite bullpen arm, putting Daniel Descalso in winning moments – and having him respond, managing Jake Lamb to put him in situations to succeed and sticking with Fernando Rodney when the fanbase and national media were calling for Bradley as the closer (Rodney racked up 39 saves, third in the major leagues), the duo shaped a group that was one of 2016’s disappointments into one of 2017’s biggest surprises.

Hazen brought in the talent and Lovullo implemented it.

The numbers show improvement across the board, but what is most telling is the improvement in the pitcher. The 2016 pitching staff was dead-last in ERA with 5.09 runs per game. The 2017 crew gave up nearly a run-and-a-half less with a 3.66 ERA, giving them third in the league in that category.

Opposing hitters’ batting averages dropped 35 points from .275 to .240 in from those two seasons.

All that improvement happened in one season. What is in store for Lovullo and the Snakes moving forward?

State 48 Not Done Yet