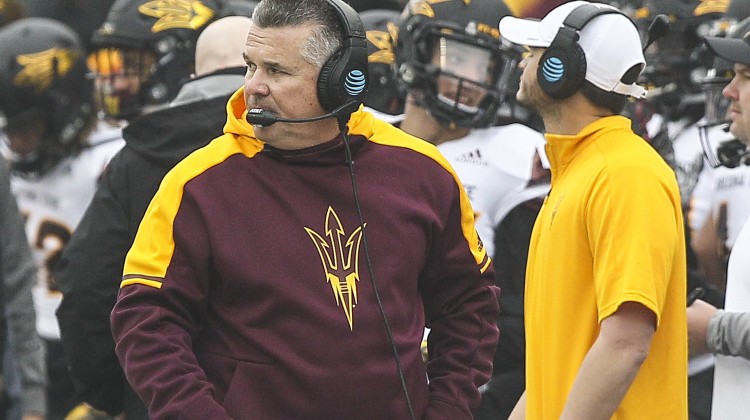 The question was going to be asked sooner or later during Todd Graham’s almost 25-minute news conference on Monday.

Do you think you have to win this weekend to save your job?

“I don’t have anything to say about that,” Graham answered.

Predictable answer. Can’t blame him for that. But it seems he’ll have to win to remain with the program.

The Territorial Cup speaks for itself, as players said after the win at Oregon State. A win for Arizona State would mean 7-5, which somehow looks drastically better (even though it isn’t) than 6-6.

I’m not inside the locker room and neither are you. However, you’d have to think there’s something extra in it for the Sun Devils. They were embarrassed last season in a game where Arizona didn’t even need to attempt a single second-half pass. Furthermore, that loss kept them from going to a bowl game, the final scar in a six-game losing streak to end the season.

Saturday is Senior Day. Demario Richard, DJ Calhoun, Tashon Smallwood and others will be honored. Graham talked a lot Monday about how the last few weeks of the season sneak up on seniors.

“I can tell you I love coaching, but man, it wasn’t like playing,” Graham said.

Graham said he tells them to make the most of it. Every snap, every play.

The coach also spoke about the late Frank Kush. Graham said Kush used to make sure he (Graham) knew the ins and outs of the rivalry.

If you didn’t know, Kush beat the Wildcats 16 times in his 21-year coaching career. He never let Graham forget it, either.

“You can’t argue with it,” Graham said. “He flat out got it done in this game.”

When asked about the meaning of the rivalry, Graham stated the obvious: It’s the most important game not only for fans, but for coaches, staff members and players.

In rivalry games, Graham said, it doesn’t matter what teams did last week or last month, certainly not last year. That means the Sun Devils have a chance to truly flush last season by winning on their home field on Saturday.

If they don’t, Graham will once again feel the way he has twice in the past three years.

“There’s nothing more miserable than losing this game,” Graham said.

But if ASU loses this year, Graham may be on his way out.