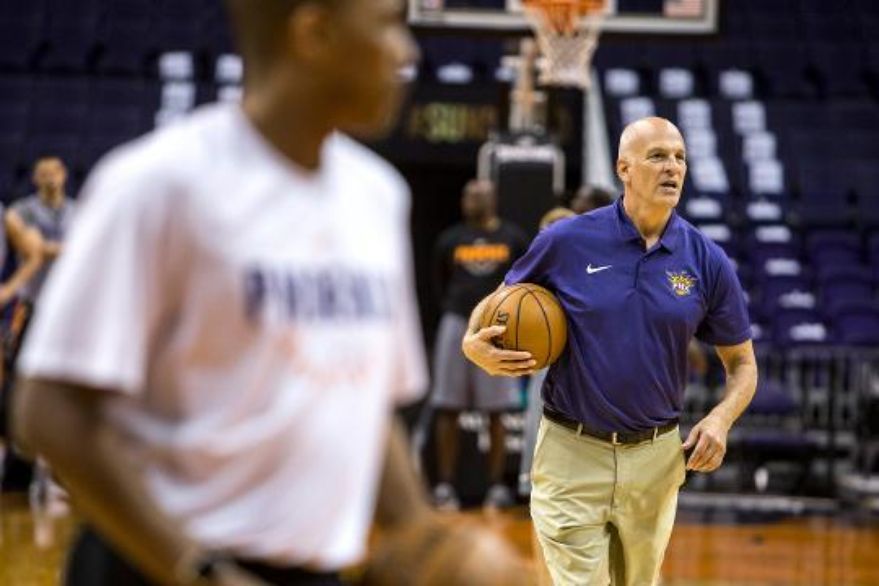 A Canadian who previously had some bit parts takes over the lead role from another relatively unknown after terrible early reviews in an effort to save a franchise with a large amount of promise but no proven success.

Sound familiar? Of course it does. That’s because I’m talking about Michael J. Fox taking over for Eric Stultz as Marty McFly.

But it also applies to Jay Triano taking over for Earl Watson as the Suns head coach. His hiring has certainly brought the Suns’ focus Back to the Future.

(If we’re stretching the comparison even thinner than it already is, Sarver = Biff Tannen, McDonough = Doc Brown, #TheTimeline = The DeLorean and Devin Booker = The Flux Capacitor)

It’s certainly a small sample size, but through five games, Triano has breathed new life into the Suns. He’s provided stability in the locker room that had been lacking and, even in its infancy, has built an offensive system that was non-existent under his predecessor.

It’s not just the Suns record, 4-1, where we’ve seen the improvement since Triano has been at the helm, it’s the growth we’ve seen from the team’s young core. Devin Booker has shown an ability to score efficiently, 25.4 points per game at 48% from the field and three, while also distributing the ball, 4.5 assists per game, and contributing to the team’s improved rebounding, 4.8 rebounds per game. T.J. Warren has taken a huge step as well. Not only did he score his career-high 40 points against the Wizards, he’s also become a force on the glass averaging 7.4 rebounds and having an impact defensively with 1.2 blocks a game. The biggest transformation has come from the 19-year-old Dragan Bender. He went from about as non-existent as Crispin Glover in Back to the Future II — see it ties back — under Watson to emerging as a real contributor on both ends of the floor. His defensive impact while playing with Josh Jackson is noticeable, his effort on both ends of the floor has earned him minutes over Marquese Chriss and offensively he’s shown more comfort and confidence.

While the start under Triano is encouraging, the Suns still need to learn from the issues of the past. (As Marty and Doc showed us, if you don’t learn from them, you’re doomed to repeat them for an entire trilogy.) The biggest problem with the full-time hiring of Watson was the fact the team didn’t interview anyone else. They allowed a small amount of games, success and good vibes to skew their judgement thinking it was sustainable for the long term. Even if the current trends continue for another 72-games under Triano, the team will need to explore all options available to them. They can’t simply assume it will continue.

What they can take at face value though is the fact that a coach can have a tremendous impact on the development of the franchise’s young core. Simply having a leader who has provided consistent rotations and stability in terms of Xs and Os has had a noticeable impact. Finding the right person, regardless of cost, who can continue to build upon this is imperative for the franchise.

As much as it’d be nice for the Suns to be able to change the past, the future is all that matters and Jay Triano is showing them a path to get there presently by simply restoring order and faith in the potential on the roster.

In reply toBrad Cesmat
@bradcesmat @wilnerhotline @Sports360AZ Nice politics shot on SMU. Has zero to do with it.. Like they have anything to do with the ruling.
View on Twitter
0
0

Brad Cesmat ·
@bradcesmat
Interesting view from @wilnerhotline on a basketball-only school in the mix. Pac-12 Survivor Guide: Expansion options from Spokane to Dallas - https://t.co/0q12ukm5QT via @sports360az
View on Twitter
4
13