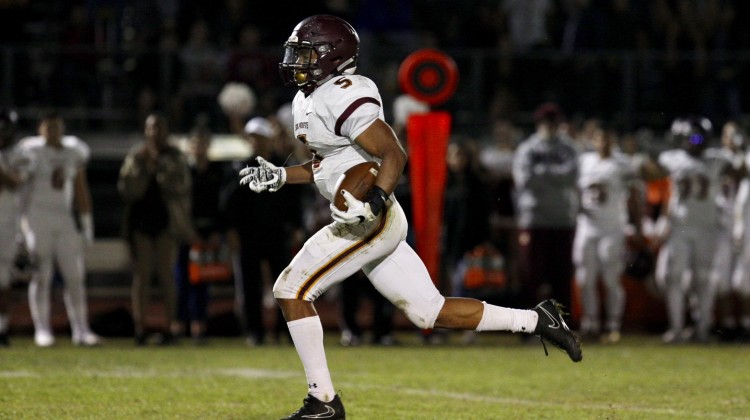 Hope everyone is enjoying their Thanksgiving week. Since we are still over a week away from Championship Saturday in Tucson on December 2, I decided to rewind a bit on a few of the things we’ve learned through the playoffs to this point.

When The Saints Go Marching In

Notre Dame Prep’s undefeated run to the 5A title game started the moment George Prelock took over as head coach of the Saints earlier this year. His message was quite simple: 2016 and the controversy surrounding it was over.

NDP has followed Prelock’s verbal vision all the way the championship game. The Saints are one of the more resilient, balanced teams I’ve seen in quite some time. Sure, there’s plenty of high-end talent but every single player and coach on the roster seems to be working as one which can go a long way in high school football.

Saints are heading to the Championship! Go ahead TD to put the Saints up 37-34. pic.twitter.com/IjXXKHHtgS

It takes quite a bit of composure and confidence to win back-to-back playoff games by just three points when the stakes are high.

Getting Straight To The (Sal)Pointe

Well, the Salpointe Lancers are certainly hoping history repeats itself at Arizona Stadium a week from Saturday. In 2013 Dennis Bene’s team completed a perfect 14-0 season blowing out Chaparral to win a Division II championship inside the football home of the local college.

The task will be much tougher in 2017 with four-time defending state champion Saguaro standing on the opposite sideline.

The Lancers feature one of the state’s most dynamic skill players in sophomore Bijan Robinson who ran all over Sunrise Mountain in the semi-finals. Salpointe’s offense has scored at least 42 points in all three playoff games, while their defense has been not only stingy, but opportunist. Bene’s group has been excellent at turning takeaways into points.

The Sabercats were sloppy early in their semi-final win over Higley. You can bet Salpointe has Saguaro head coach Jason Mohns’ full attention. Expect a much cleaner game from the ‘Cats in the ‘ship.

Seems only fitting two teams from the toughest section in the state will meet in the 6A title game, right?

The Perry Pumas have been on a roll since a mid-season loss to Chandler, now Preston Jones’ squad will get a re-match with a gold ball on the line. Neither of these teams have been challenged in the post-season and I’m expecting a much closer result than the Wolves 55-27 win back in early October.

FOR THE PROGRAM, COMMUNITY AND STUDENTS!! PUMA NATION BABY!!??☝️ https://t.co/wPepBzeULp

By now you know all about Brock Purdy but the Pumas are loaded with talent on both sides of the ball. Three-year letterman, junior wide receiver D’Shayne James is over 1,000 yards and has scored 16 total touchdowns. Senior running back Kenny Fultz has 15 rushing touchdowns on just 82 carries and serves as the perfect complimentary piece to Purdy, the Pumas leading rusher, on the ground.

The biggest challenge for Perry probably won’t be scoring points but trying to slow down a now-fully healthy Chandler offense who has been lethal since quarterback Jacob Conover’s return from injury.

Last week two of the most exciting, productive quarterbacks in the state saw their final season end in gut-wrenching fashion.

Since transferring from Salpointe, Cienega’s Jamarye Joiner has transformed himself from a great athlete to an excellent quarterback under head coach Patrick Nugent and his staff. The University of Arizona commit’s final season included 44 touchdowns and over 3,500 total yards as the Bobcats came up just short against Notre Dame.

Respect to @Jamaryejoiner. 24-2 as a starter. Won’t be playing at University of Arizona stadium in 2 weeks, but you can catch him (or can you?) there on Saturdays from now on.

In just two seasons at Cienega he amassed over 6,000 total yards and 74 touchdowns.

Meanwhile, here in the north Valley Ryan Bendle proved to be a quick study at Liberty after taking over the reins full-time last spring. While his eye-popping 29 touchdown passes last fall was impressive, he most importantly took care of the ball, throwing just three interceptions in 164 attempts as the Lions eventually came up just short against Centennial in the 5A semi’s in Peoria.

I’m so grateful for this game and what it has brought me, to my family, coaches, and brothers, I’m forever in debt to you all. Now here’s my last high school football game.450 TOTAL YARDS AND 3 TD’s.ALL GLORY TO GOD. #2szn https://t.co/Xno6lmKUnl

Bendle also rushed for close to 1,000 yards and seven scores.