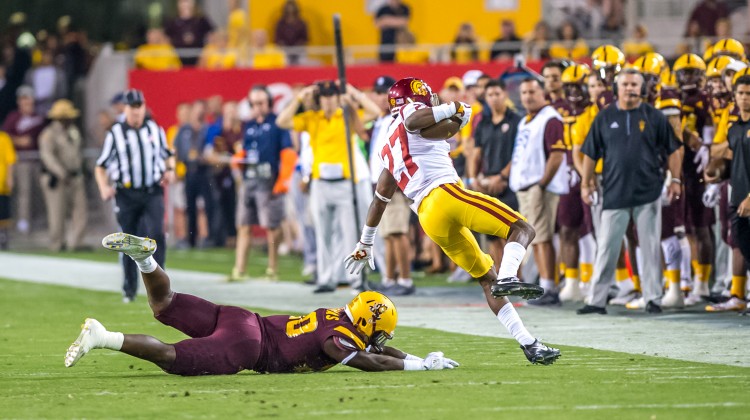 Todd Graham had more answers on Monday, two days after his team’s somewhat inexplicable loss at UCLA. He’d watched the film and had time to digest what happened, and why his team was unable to become bowl eligible with a sixth win.

There’s still some mystery to the loss, though. Arizona State led in most statistical categories and it wasn’t reflected on the scoreboard. Saturday’s game was winnable and everyone knew it, which makes it sting that much more.

“That was frustrating because it felt it was a game we let get away from us,” Graham said at his Monday news conference.

It was the same sentiment two days ago. Asked about the loss after the game, senior defensive lineman Tashon Smallwood was candid. The way he shook his head and the tone in his voice told the story.

Arizona State let one slip away.

“Man, there’s no reason why we shouldn’t have won this game,” he said. “We’ve been saying that too often this year.”

Here’s a wrap-up of the loss, which perfectly exemplifies the roller-coaster ride ASU football (5-5, 4-3 Pac-12) has been this season:

The Sun Devils outgained UCLA on offense and were better on third down. They ran the ball extremely well, though they got away from that in key spots in the red zone.

On two key drives in the third quarter, ASU settled for field goals. Graham on Monday said his team had negative plays on first and second down in the red zone, which forced it to throw the ball.

And the Sun Devils can’t blame a slow start this time around. They jumped out to an early 14-point lead, and when looking to add on, quarterback Manny Wilkins threw a pick-six. Even so, ASU led at halftime.

Moving to the defense, ASU gave up 573 yards of offense. UCLA quarterback Josh Rosen made plays, but Graham after the loss said he expected that. The unexpected part was the Bruins’ 192 rushing yards.

The disappointing part for Graham, but perhaps unsurprising for everyone else: The Sun Devils gave up too many big plays.

So, while this loss is difficult to explain, ASU deserved it.

“Going back and looking at it the second time through, we didn’t play good enough defense to win the game,” Graham said Monday. “We rushed the ball well, but we also made errors offensively that stopped our ability to score touchdowns.”

Now the Sun Devils are searching for answers, both for the last loss and the remaining games.

They may have moved the focus to this week’s game at Oregon State, but the loss at UCLA has to sting. ASU could have clinched a bowl, but instead will need to win one of its next two games to do so.

Bringing up last season is sometimes useless, but here it sort of fits. The Sun Devils were 5-1 a year ago, but that team filled with injuries missed out on six straight chances to secure a bowl game. This year’s squad has two opportunities — a road game at Oregon State and at home against rival Arizona.

Surely the Sun Devils will beat lowly Oregon State, right? The Beavers are 1-9 overall and 0-7 in conference, their last win coming over Portland State on Sept. 2, a game they won by just a field goal.

Not so fast. Saturday will be Senior Day at Oregon State, a team looking to take something positive from its season.

“I know we’re going to get their best game,” Graham said.

In 2014, ASU went to Corvallis as the sixth-ranked team in the country, only to see its playoff hopes disappear in an upset loss. There are no guaranteed wins.

Asked if his team is facing any pressure heading into the last two games with bowl eligibility at stake, Graham brushed off the notion.

“No, the pressure would’ve been to beat USC and beat UCLA and win the conference championship, that would be the pressure,” he said.

He’s right, because after wins over Washington and Utah, the Sun Devils faced actual expectations for the first team this season. That was real pressure, and they shriveled.

But do you know what would look even worse?

Not making a bowl game for the second year in a row. That’s enough pressure in itself.