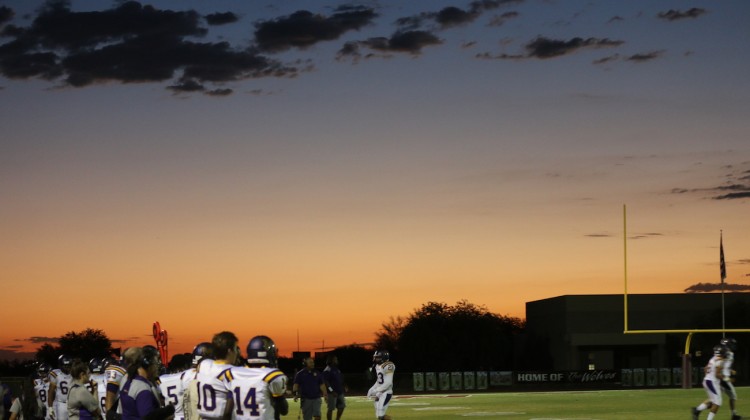 Playoff teams have plenty of stat-fillers. I did a deep dive for each team in the 5A and 6A divisions to tell you a telling stat about each team on quarterfinals eve.

A reminder on the 6A and 5A brackets.

Three of the four quarterfinal matchups are rematches. The better seed won each game, but the combined margin of victory was 10 points.
10. Points.

This should be fun.

The Highland Hawks are a battle-tested team and aren’t strangers to close games. Of the 11 games the Hawks have played in five games where the margin of victory was 14 points or less.

We know the Mountain Pointe Pride’s style. They run the ball, they dominate the trenches, they don’t make many mistakes. You know the names Matthew Pola-Mao and Shomari Hayes on that defensive line, but Kenneth Lofton is another versatile athlete. Lofton has notched 11.5 sacks as a junior and had a great game in the 14-13 win over Highland in the regular season with eight tackles with two tackles for loss.

We had Hamilton coach Dick Baniszewski on the #FridayNight360AZ Preview Show this week, and I asked him about what his biggest takeaways from the first time Hamilton and Perry squared off – a 65-63 shootout that resulted in a Pumas victory. His answer? Brock Purdy.  Over the last two years and in three games, the Perry quarterback threw for 1,182 yards (394 yards per game), 17 touchdowns and 1 interception. He has rushed for 360 yards (120 per game) and four touchdowns. Most importantly, three Puma wins.

Pinnacle had three losses in four weeks. The last loss was on Sepember 22nd against Mountain Pointe. Since then, the Pioneers have rattled off 61.83 points in six games. Defensively? They’ve given up 6.67 points per game. Not a bad point differential and a great time to be hitting your stride.

When Chandler played Pinnacle in a regular sdason matchup, they were without quarterback Jacob Conover and wide receiver Gunner Romney. The offense was fueled by running back Drake Anderson, who has been one of the biggest breakout players in 2017. In this game, he had 201 total yards with four receiving touchdowns and a rushing score. The Pioneers will have to limit Anderson, and also have to account for Conover, Romney and a slew of other playmakers.

Credit to Westview head basketball coach Brendan McEvoy for this stat. In the Knights five losses, three of them, particularly the first three games of the season were single possession losses. A seven-point loss to Basha, a one-point loss to Brophy and a six-point loss to Horizon separate the 6-5 Knights from being 9-2.

The Mountain Lions got off to a rough start of the season with back-to-back losses to Chandler and Hamilton, but man, did they respond nicely with nine straight wins. Red Mountain is hosting their first quarterfinal home game in a decade, and what helped them turn the season around is the defense. In nine games, the Mountain Lions are giving up 15.33 points per contest.

Tigers receiver Teon Simmons is the second leading receiver behind Jesus Valenzuela. When Simmons catches a pass, there is over a 50% chance it’s going to the end zone. 30 receptions in 11 games with 16 touchdowns, including three in the opening round.

Quarterback Jamarye Joiner has thrown for 3,481 yards with 39 touchdowns and 12 interceptions. He’s rushed for nearly 1,800 yards and 29 scores. He’s eclipsed the 100-yard mark five times this year. We’ve seen his numbers across the board bump up from last year whether it’s yards or touchdowns. Pat Nugent told us on the #FridayNight360AZ Preview Show that the offense starts with him, and the Bobcats have plenty of weapons around him.

Queen Creek has been one of the most consistent programs over the years. Travis Shureman has had doulbe-digt wins in every season he’s coached the Bulldogs since 2013. Wide receiver Garrett Duke has been so consistent with a touchdown in every game this year. He bucked the trend in the playoffs with two touchdowns.

The Notre Dame Prep Saints have one of the deepest teams in the state. Along both lines, in the secondary, but this depth might not be more evident than in the backfield. Cole Fisher leads the way with 1,193 yards and 20 touchdowns. Junior Jake Smith, who picks up an offer like every ten minutes, has rushed for 929 with 11 touchdowns. Receiving-wise, Smith leads the team with 903 yards and 11 receiving touchdowns.

The Night Hawks offense starts with running back Nick Brahler. He nearly has 1,800 rushing yards and shows up for the big games. Three of his top four rushing performances came against playoff teams in Marana (239 yards), Cienega (213 yards) and Apollo (290 yards).

The Liberty defense is one impressive group. John Clark and Braxten Croteau are up front challenging 5A offesnsive lines. I love the way Ryan Puskas plays at safety, being able to cover the pass and come up in run suppport as well. This is a deep group who give up next to no points. The only time they gave up more than 20 point was in their lone loss of the season against Sunrise Mountain.

Sophomore Tommy Christakos is a big matchup issue at 6-foot-4 and 190 pounds. He’s brought in seven touchdowns but doesn’t only make an impact on the offense, but special teams as well. He kicked the go-ahead field goal in the Firebirds’ first round win over Williams Field. When going up against Centennial, it seems like special teams is especially important.

While we are talking about sophomores, Jaydin Young is a guy who jumped out to me when I watched Centennial play Liberty in Week 10. Along with Washington commit Dom Hampton, Young has been so good in the Coyotes’ secondary. The sophomore leads the Coyotes in tackles with 74 and three interceptions.

Make sure to use #FridayNight360AZ in your social media posts each and every week, and they may be included in Sports360AZ’s various high school content.