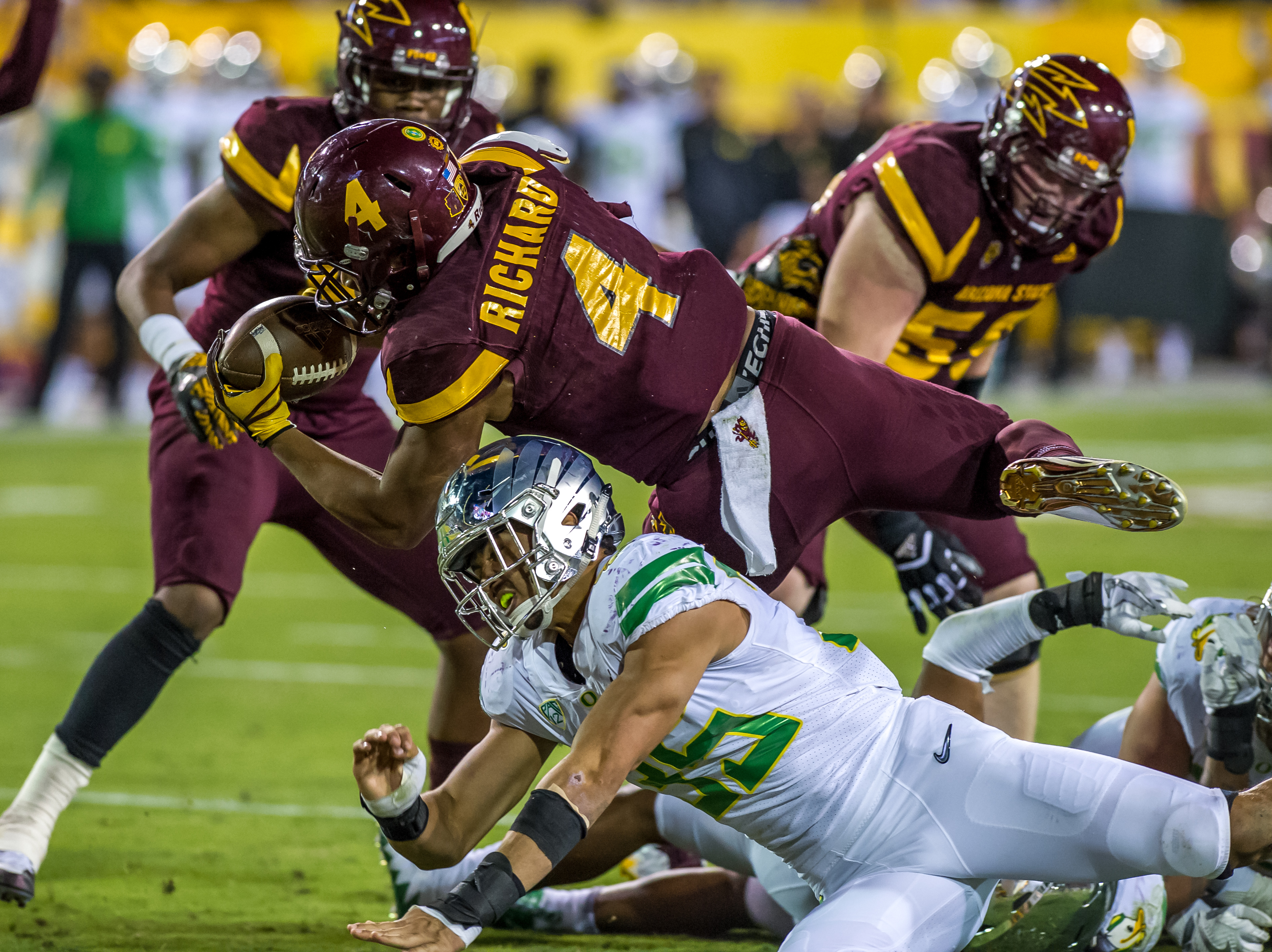 When it comes to learning the playbook, there are no requirements on how to do it — only that it gets done. Different players use their own techniques, some more elaborate and quirky than others.

As a freshman at the University of Texas in 2015, wide receiver Ryan Newsome used to get out of bed in the middle of studying concepts. As he stood on his dorm room floor, he would call out specific plays and line up as if he were on the practice field.

Newsome’s rehearsal may seem a bit unique to some, but he wanted to get on the field, and figured he’d better pull out all the stops to do so.

“What does it mean to you? If it means a great deal to you, you’ll do the necessary things to put yourself in position to get on the field,” said Newsome, now at Arizona State. “If it doesn’t, then you’re going to be on the bench for a long time.”
Running back Demario Richard lived in Manzanita Hall, a popular ASU dormitory dubbed “Manzy” by residents. Fellow back Kalen Ballage lived a floor below Richard, so the two teamed up to learn the playbook.

Since they arrived at ASU, the two have been great friends. They’re done a lot together in their time as Sun Devils, from running over opposing defenses to being senior leaders on this year’s team.

Off the field, they helped each other.

There’s no secret to learning the playbook in offensive lineman Sam Jones’ eyes, though. Watching film is a must and there’s no way to get around it.

Late nights and early mornings. That’s what Newsome remembers from learning a playbook for the first time.

Football players must attend practice and position group meetings, lift weight and go to class. Somewhere in there, they need to carve out time to study the playbook.

One time at Texas, Newsome stayed up until 3 a.m. memorizing concepts, then had to be up at 6 a.m. to lift. After that, he had class and then afternoon practice.

“You really don’t get no time for rest,” he said.

When it comes to studying up, there are some players who just don’t want to spend the extra time. That can’t happen.

There are some areas a football player sometimes can’t control, like his height, athleticism and speed. The truth is that some have more natural ability than others.

But it seems everyone can successfully learn the playbook if they put enough time and effort into it. Newsome has seen guys who haven’t done that extra work, though.

“When they get in, it’s all good,” he said. “But when it’s time for certain guys to actually study, they don’t know how or they just don’t have the drive to do so. You can weed them out pretty quickly and (know) who they are, especially when fall camp comes around.”

Coach Todd Graham and the football program showed off the new Student-Athlete Facility when it opened at the end of this past summer. A new locker room, weight room and players’ lounge were just a few highlights.

Graham, however, seemed particularly excited about the learning opportunity. Jones said freshmen this year probably had it easier than he did when studying the playbook and watching film because the advanced technology “can’t hurt.”

“You got your projectors, TVs, whatever to watch film on and then the coaches got some touch screens that they can draw on, then they touch it and it goes away,” Jones said. “They don’t have to go to the whiteboard, sit back down, play the film. It’s all about efficiency and the best way to learn.”

Richard, who said he’s a photogenic person who remembers plays more easily after watching film, admitted studying a playbook is difficult. Jones said it’s more difficult to learn as a freshman entering college than it is when a program undergoes a coordinator change, like ASU did this year with Billy Napier. And though he acts out plays, Newsome also uses flash cards to supplement his learning.

Learning a playbook isn’t simple. There are different formations, concepts, motions and shifts one needs to know.

The only requirement is using the necessary effort to do so.