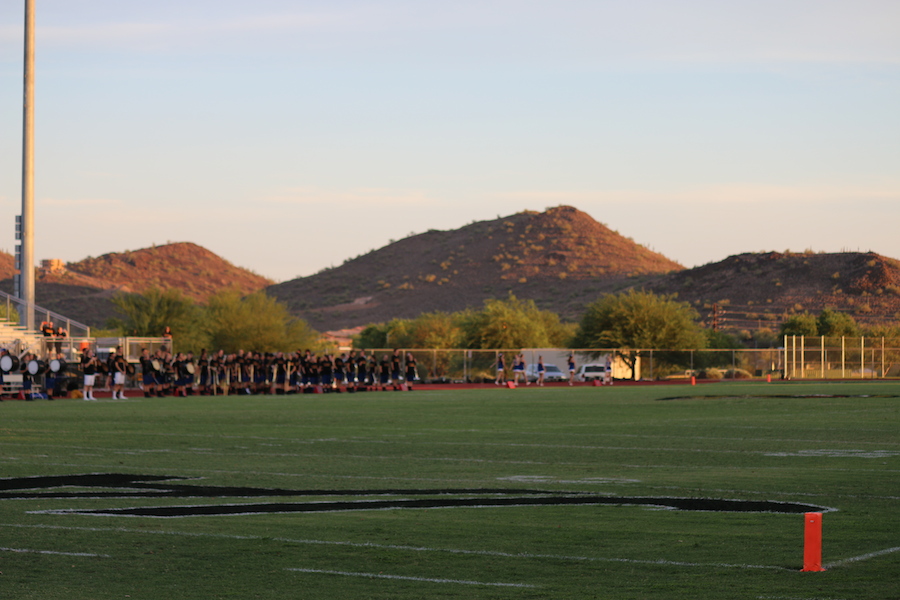 Earlier this week, I shared a few takeaways from the 5A and 6A bracket (you can check that out here). Now, we look at divisions 2A-4A. While there are certainly favorites in each division, it seems like each bracket has a lot of depth.

The Sabertcats have been the standard for this division, winning four straight state championships, but there are plenty of teams looking to make some noise in this bracket.

The top team in 4A has been building their program over the past few years. Keegan Freid has taken the reigns from Chase Cord and the Stampede hasn’t missed a beat with dual threat playmakers.  Wide Receiver Angel Ruiz has been one of the most consistent pass catchers all year with 18 touchdowns. Defensively, Craig Dennis and Brody Webb have started paying rent in the backfield they are there so often and Arrick Dowe has limited  opponents’ passing games with six interceptions. Their signature win this year was edging out a very good 5A power in Liberty and had Saguaro, who has been the a 4A institution, right to the very end before losing 28-25.

The Lancers have run and run and run this year to nine wins. Dennis Bene is one of the best at talent development, specifically with young players like sophomore Bijan Robinson. The running back had 1,300 yards and 20 touchdowns behind one of the best offensive lines in the state. Chris Aguirre racks up double digit tackles consistently and the defense has given up more than ten points in a game in just three times this year.

On the same side of the bracket is the Higley Knights, who has the firepower to make a run with another stingy defense. They’ve given up just 95 points this year, with 42 of those coming in their loss to Saguaro. That leaves the other opponents putting up 5.78 points per game. Spencer Brasch is one of the best dual-threat quarterbacks and very difficult to bring down. Draycen Hall is a special, special player as a running back, receiver and returner.

There were some who doubted the Sabercats earlier this year. They got “punched in the mouth” as Jason Mohns put it by Liberty (Nevada) and responded well East (Utah) but lost the game in the first few weeks of the season. Mohns and the ‘Cats have never shied away from competition and knew they could schedule up to get the most out of their players. They did something similar in 2015 when they lost to Centennial and Pinnacle (who were in Division I while they were in Division II) and then they dominated their way to a state championship as a 7-seed.

This run to Tucson will not be a cake walk, this is probably the best 4A division in recent memory, but Saguaro is well-equipped to make the run towards their fifth straight state title. Logan Pettijohn and Zach Wilson can both take over a passing game, Josiah Bradley is starting to play his best football and is fully healthy, Clayton Randall is a freight train in the front seven for that Sabercat defense.

I look at this bracket and I can realistically see about half the teams in this field being capable of making a run for state. This might be the toughest conference to gauge because there are just so many good teams here and so many different styles.

For top-seeded Pusch Ridge, the Lions have given up only 81 points all year. They have five players who have scored at least six rushing touchdowns. All-around this team is solid and they have had big wins over Sabino and Catalina Footills this year.

The Crusadors are used to making deep playoff runs and could present a problem to top-seeded Pusch Ridge if both make it to the second round. Northwest Christian had a tough stretch against ALA and Yuma Catholic, but have put together a nice run as they head into the playoffs. Thomas Poe’s stat line jumps out with eight rushing touchdowns and four interceptions.

Sabino has had strong quarterback play for a long time now with Drew Dixon playing his way to the University of Arizona and now Alex Bell, who has acounted for 36 touchdowns and just two interceptions. The fifth-seeded Sabercats are giving up 11 points per game in their wins, but ALA and Pusch Ridge averaged 42.5 points against them in their two losses.

After losing the opening game to American Leadership Academy, the Chargers have won nine straight games. Running back Zach Jeffries and Chandler Miles have combined for 2,400 rushing yards and 32 touchdowns. Powell Skiba has had 14 tackles for loss and 11 sacks.

Casteel brings in a ton of varsity experience, and the oldest class is their junior class. Quarterback Gunner Cruz is a very good 2019 talent and has plenty of receivers to spread the ball to. The Colts have notched six shutouts this year. With yoga and embracing the multi-sport athlete, Casteel has put a focus on not only producing football players but athletes.

The Gophers are going to be a very tough out as a six seed. Running back Nolan Susel has done just about everything with 1,700 rushing yards, 28 rushing touchdowns along with 250 receiving yards and four more scores. Defensively, he has 57 tackles and three interceptions. Pair that with the Mathis twins who make plays on both sides of the ball. In five games, the Gophers have scored at least 50 points.

The Shamrocks are a team that doesn’t quit. They beat St. Mary’s, a 4A school, lost to Seton Catholic, a playoff-bound 4A school, 31-30. Their only other loss came against Casteel, 17-10. The Colts average margin of victory was 52.9 points. The Shamrocks have a senior defense and a pair of sophomores in quarterback Gage Reese and running back Ean Chavez making plays on the offense.

I saw what the ALA defense could do against Sabino, and they swarm to the ball at all times. The defending state champs also have playmakers on the offense with Tarrik Workman being the, well, work-horse with 900 rushing yards and 14 touchdowns. Bujon Boyd, Kade Lunt and Tanner McLachlan have combined for 1,700 receiving yards and 21 touchdowns.

Boyd & Lunt Among Team Leaders For ALA

Another group of really good schools that span the state. All regions, all styles, but it’s going to be a grind to win this division. I could write about just about every team in this region, but I’ll pick out a few teams of interest.

In the last two years, the Elks have gone 23-1 with the lone loss coming from Thatcher in the state championship game last year. Round Valley puts up 46 points a game while only giving up less than eight points. There’s a reason they’re the one-seed.

Grant Schreyer has been very good in his debut season and has connected Jacob Kaites and Tanner Hoffman for 21 touchdowns. Running back Shayne Pahnke is averaging 11 yards per carry and 19 touchdowns on the year. The Eagles defense is suffocating and they have only given up more than ten points in a game twice this season.

Phoenix Christian has notched four shutouts this year and eight of these games opponents had been held to less than ten points. The only time the Cougars scored less than 40 points was against a good Scottsdale Christian defense. They coasted to a 28-7 win that night.

Keep it locked on Sports360AZ for continued high school football playoff coverage with the #FridayNight360AZ Preview Show, AZ Audibles, Eric Sorenson’s Zone Read and the Rockin’ Refuel Recruiting Roundup. If you’re at a game, make sure to use #FridayNight360AZ on social media.