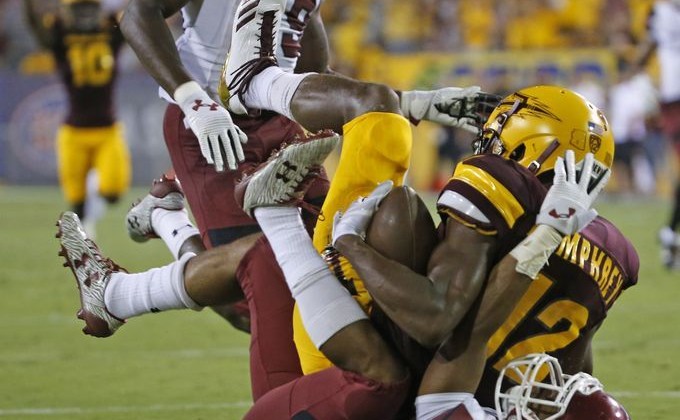 Arizona State football opened the 2017 season with a 37-31 win over New Mexico State that was perhaps too close for comfort.

Here are a few things we learned:

New Mexico State pulled within a point of the Sun Devils at one juncture on Thursday. ASU scored the first 14 points, but stalled on its next five drives. The Devils won’t be able to do that when playing better opponents.

New Mexico State isn’t one of the best defenses ASU will play. Not even close. But it could be comforting that Wilkins was efficient and even protected himself better when running at times. He completed 22 of 27 passes for 300 yards with two touchdowns. He said he tried to “manage the game” well. He did.

This one was to be expected. Joey Bryant and Kobe Williams played their first Division I game on Thursday. There were busted coverages in the secondary, but each intercepted a pass. Williams took his to the house. Head coach Todd Graham said he liked what he saw from the safeties (Das Tautalatasi and Chad Adams) too. This group needs work. We knew that coming in, though. The Aggies had 398 passing yards. Luckily, ASU has another game to figure it out before the airstrike starts when it goes to Lubbock, Texas, for a showdown with Texas Tech.

I thought the consistency on the line all fall was encouraging. Offensive line coach Rob Sale experimented and switched things up during practice, but for the most part, the same five ran with the first unit. Thursday wasn’t good, though. The line gave up seven sacks. Wilkins blamed it on himself as he said he could’ve handled protections better. But the offense also couldn’t run the ball against a team that couldn’t stop the run a season ago. Not good.

Sure, the secondary is concerning. But the front seven looked great, as it should have. Koron Crump was in the backfield all night. Tashon Smallwood had a great game. So did JoJo Wicker. DJ Calhoun does a great job of getting all over the field quickly. I like this group.

ASU hardly subbed on defense. Tashon Smallwood said he played the whole game. He said the defensive players expected that. However, it’s somewhat surprising and concerning. Maybe the coaches don’t trust the depth? Maybe the depth isn’t there? Who knows. But it’s something to watch for in the coming weeks.

Up next: ASU hosts San Diego State on Sept. 9.