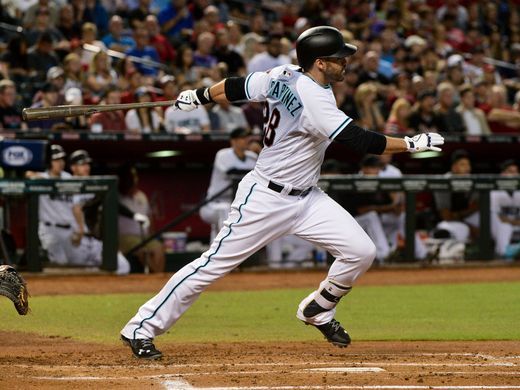 The Arizona Diamondbacks wrapped up their final regular season homestand of 2017 against the San Francisco Giants with a series win.

The Diamondbacks rallied in the ninth inning on Wednesday behind a J.D. Martinez home run, and singles from Jake Lamb, A.J. Pollock and fielder’s choice by John Ryan Murphy. With bases loaded and one out, David Peralta was walked by Giants pitcher Sam Dyson for the Diamondbacks ninth walk-off win in club history.

Here’s what you need to know about the series with the Giants and what lies ahead for the weekend:

Manager Torey Lovullo announced on Tuesday that Zack Grienke would start Friday, Taijuan Walker on Saturday and Robbie Ray on Sunday, in Kansas City. With the shift, Braden Shipley got the spot start on Wednesday.

Lovullo said that they will wait until after Greinke’s start on Friday to make an official announcement on if Greinke will get the Wild Card start.

“We’re still having some conversations,” Lovullo said before Tuesday’s game. “Obviously Wednesday (Oct. 4) is the most important day that we’re concerned about.”

Patrick Corbin and Zack Godley will be available out of the bullpen in Kansas City this weekend.

J.D. Martinez is on an absolute tear. On Tuesday night, Martinez went three for four with a grand slam, double and six RBIs in the first two innings. He came a triple shy of the cycle.

Martinez’s grand slam in the second inning was the fifth of his career, his third this season. He has had two since becoming a D-back. His six RBIs helped him reach a career high 103 RBIs, 64 of which have been with the Diamondbacks.

On Wednesday, Martinez hit his 29th home run with the Diamondbacks in the bottom of the ninth, his 45th on the year. He set a new club record for 36 RBIs in a month, surpassing Luis Gonzalez’s 35 in June 2001.

Additionally, Martinez’s home run was his 16th in the month of September. He is now tied for the National League record of home runs in September set by Ralph Kiner in 1949.

Jake Lamb hit his 29th home run of the season against Giants’ pitcher Jeff Samardzija on Wednesday. Lamb’s shot over the right field fence set a career-high for the lefty.

After Sunday’s celebrations, Lovullo gave his regular starters a well-deserved day off.

The post-celebration side effects showed some in Zack Godley’s start. Godley went four and one third innings and allowed six runs, five earned, on eight hits.

Brandon Drury had a solid night going two for three with a double and two RBIs.