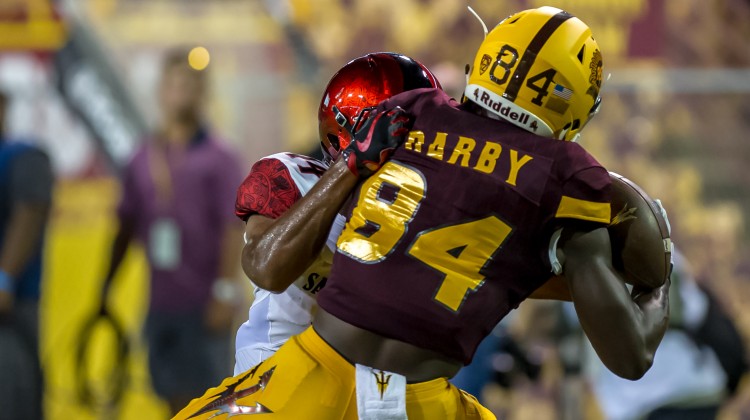 I’ll preface my concerns by saying this: It’s early. Many fans have been saying the ship is sinking, but this is only Week 3. There’s no need for that — at least not yet.

However, here are a few of my negative and positive takeaways from this team’s first two games.

Let’s start with the negatives. No, I’m not a pessimist, but you’d be lying if you said this team has played well through two games. Can it play well? Absolutely? Has it yet? No.

ASU coach Todd Graham and offensive coordinator Billy Napier have long talked about how the Sun Devils will establish the run. We’ve yet to see it.

But I don’t blame Kalen Ballage for it. Instead, the offensive line’s struggles have handicapped ASU’s ability to do so.

In two games, the Sun Devils have rushed for just 221 yards while their opponent have gained 495 on the ground.

“Mostly fundamentally, making sure that we don’t have mental errors and things like that,” Graham said when asked about jumpstarting the running game. “We have good players, that’s not the issue. We just got to get them playing better fundamentally and make sure we eliminate the errors.”

The offensive line gave up seven sacks against New Mexico State and five against San Diego State. There were big-play opportunities, but whether quarterback Manny Wilkins had the time to complete them was the question.

ASU will certainly face much better defensive lines than those of New Mexico State and San Diego State. Improved protection will be key.

The Sun Devils fielded a different first-team line at Tuesday’s practice. From left to right, it was as follows: Zach Robertson, Sam Jones, Cohl Cabral, Steven Miller, Quinn Bailey. The odd man out is center A.J. McCollum. We’ll see if this remains consistent.

Graham last week said defensive coordinator Phil Bennett wanted to make a statement about his defense’s toughness when he didn’t sub until the fourth quarter against New Mexico State. While Graham qualified that he usually doesn’t sub linebackers or defensive backs (except for a nickel package), it’s still startling that the Sun Devils have only had one consistent second-teamer rotating in on defense.

Defensive lineman Renell Wren saw time against the Aztecs. A number of second-team guys played against New Mexico State, but that was because of the score.

But in a close game against the Aztecs, there weren’t many substitutions. That’s concerning. It perhaps makes the general public feel as if the defensive depth is lacking.

ASU’s starters will need to be well-conditioned if they’ll be playing virtually the entire game against Texas Tech. The Red Raiders run an up-tempo Air Raid offense and don’t give defenses a break.

I’ll admit this could be premature too. But the special teams performance against San Diego State was a tad bit alarming. Of Aztecs running back Rashaad Penny’s 353 all-purpose yards, 99 came on a kick return touchdown.

“He’s a good returner and all that, but you’re going to play against good returners,” Graham said after the game. “I thought special teams was chaotic, and it shouldn’t be. We practice the heck out of that, so we obviously got to do a better job of preparing our guys, and that’s on me.”
Special teams miscues lose games many times. Penny’s return touchdown swung the momentum. Wilkins had just connected on a deep pass to receiver Frank Darby to set up a Ballage touchdown run. Penny’s touchdown sucked the air right back out of Sun Devil Stadium.
Punter Michael Sleep-Dalton wasn’t good. One of his punts went just 12 yards. Two of his punts drew boos from the crowd. Graham said he’s never seen Sleep-Dalton punt that poorly. Maybe so. But spotting teams prime field position can’t happen.

Now, let’s take a look at the positives. There are a few. The sky isn’t falling just yet.

The redshirt junior has had a heck of a start. If he had better protection, I believe he would’ve led the Sun Devils to a Week 2 win.

Sure, he’s missed throws. But he’s been efficient. He’s also stayed healthy by sliding and not taking hits he doesn’t need to. Many fans wanted Blake Barnett to start over Wilkins, but Wilkins isn’t letting the coaching staff replace him. His play has spoken for itself.

Wilkins has completed 70 percent of his passes this season and has thrown four touchdowns. He’s still yet to be intercepted, though he did lose a fumble on a strange play against the Aztecs. This is an encouraging sign.

ASU’s offense has struggled to establish a rhythm. It couldn’t do so often against New Mexico State and never found one against San Diego State. Graham and staff always emphasize the turnover battle. Wilkins is certainly doing his part.

Regardless of protection issues, the receivers are good. N’Keal Harry, John Humphrey (when healthy), Jalen Harvey, Kyle Williams, Ryan Newsome and Darby all pose a threat. The versatile group of receivers is perhaps ASU’s brightest spot.

As has been mentioned throughout this piece, the protection needs to be there. Receivers can’t make plays if the quarterback doesn’t have time to throw them the ball. That much is simple.

If/when Wilkins has more time to throw, expect the receivers to be lethal.

Joey Bryant and Kobe Williams are young corners who received their first taste of Division I football against New Mexico State. Outside expectations perhaps weren’t high because of that inexperience, but they’ve played well. They’ve had a difficult transition going from New Mexico State’s spread offense to the Aztecs’ pro-style offense and now to Texas Tech’s Air Raid.

Playing the Red Raiders will be a terrific measuring stick for their progress. It’d be unrealistic to expect they’d seamlessly transition to this level. The fact that they’ve looked good in stretches is a positive, in my opinion. Let’s see if it continues.

HOW CONCERNED SHOULD FANS BE?

As I said earlier, it’s simply too early to believe the season is doomed. The Sun Devils haven’t looked great, but there are 10 games to play. That said, losing to San Diego State at home wasn’t a great sign. The Aztecs are a great team and I believe they could beat a lot of good Power-5 schools, not just ASU. But if ASU plays like it did the first two weeks, I can’t see it winning more than three or four games. Fortunately, there’s time to make the necessary improvements. It doesn’t look good, but I wouldn’t write off the Sun Devils just yet.

Updates: Graham said wide receiver John Humphrey is “questionable” for the Texas Tech game. However, he said running back Demario Richard and defensive back Demonte King should be back. Freshman defensive back Evan Fields is expected to be available too, per Graham.

Sports360AZ Retweeted · Jordan Spurgeon
@spurge_
Down 2-1 in the 6th, full count, fans on their feet chanting “ASU” and Kristiana Watson delvers with a GRAND SLAM @ASUSoftball 🤯

Jordan Spurgeon ·
@spurge_
Down 2-1 in the 6th, full count, fans on their feet chanting “ASU” and Kristiana Watson delvers with a GRAND SLAM @ASUSoftball 🤯