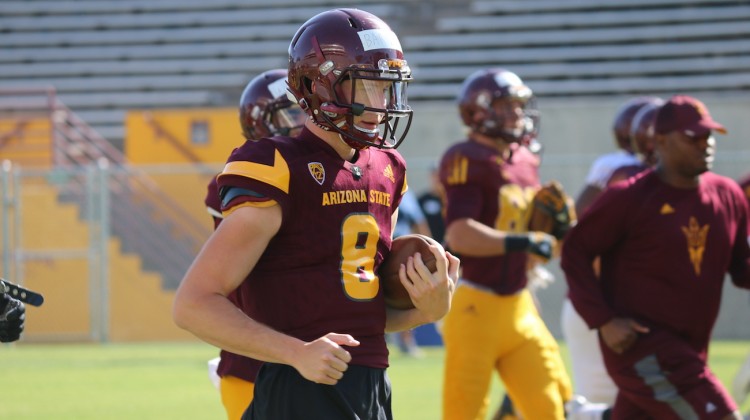 The preseason speculation is almost over. Arizona State football opens its season on Thursday against New Mexico State at Sun Devil stadium, and we’ll begin to receive answers to questions we’ve pondered and topics we’ve discussed since spring practice.

The largest has been the quarterback battle. Now that preseason is wrapping up, we’ll receive some welcomed clarity.

Manny Wilkins will almost surely run out with the first team. ASU coach Todd Graham has said it often the past month: Wilkins is his starter until beaten out. No one has done that yet.

Wilkins isn’t flashy — well, except for the hurdling. But he’s consistent. He doesn’t have otherworldly arm talent, but he distributes the ball where he needs to. It seems his decision-making has improved this fall. Sure, he still forces balls here and there, and sometimes doesn’t go through every progression, but he’s done enough.

Barnett has looked the part, but hasn’t yet acted it. He hasn’t been downright bad, not at all. He just hasn’t done enough to win the job — at least not yet. He’s made great throws and great plays in spots. But he hasn’t been better than Wilkins.

That said, the competition is close. I thought Wilkins’ deep ball — one of his knocks — was improved early in Fall Camp. It hasn’t been the same since then.

Leadership is another area where I believe Wilkins has an edge. It’s to be expected, too, because he’s been with the program since 2014. But this fall, it seems the guys have taken to him. At Camp Tontozona, Wilkins would go to players on the sideline and would give them pointers. He sometimes corrected them, but always seemed to encourage them.

But there’s some sort of disconnect.

There were many fan polls on Twitter asking who the starter would be. The majority said Barnett. That’s understandable because he was a 5-star recruit who almost won the Alabama job. If he can almost win the starting job at Alabama, he’s a lock to win it in Tempe, right?

But Wilkins was the returning starter. It seems fans discredited him. I think that’s wrong.

He and Barnett are close, but it seemed like fans dropped everything Wilkins did and fled for the Barnett train. Wilkins led the team to a 4-0 start before suffering an injury. He didn’t seem fully healthy the rest of the season. And if healthy, I think this year’s offense is more versatile and talented than last season’s.

So who’s to blame for the disconnect?

This is a difficult question. As I previously mentioned, Barnett was a 5-star. Most casual fans don’t heavily research ASU football to catch up with the quarterback competition. They merely assume Barnett is better. And that’s O.K.

I think the media could be to blame — at least indirectly. Camp Tontozona practices are the only completely open practices of the season. Reporters are usually only allowed to view about 20 minutes of a practice. In that, there are maybe two chances to see 11-on-11 action. ASU doesn’t open the playbook much, so it can be difficult to analyze without any other perspective.

As a result, reporters can’t properly inform fans of the quarterback battle’s progression. We see a lot in Camp Tontozona, but not much after. The scrimmages are closed. No one but those in the program knows what happened after the media viewing periods in practice.

ASU actually allows more access than most programs. Other Pac-12 programs completely close preseason practices. Reporters and fans in Tempe are lucky. Graham and staff are showing much more than other programs.

Back to the field.

During the short media viewing period, Wilkins has looked more comfortable. He’s established better rhythms in the 11-on-11 periods. Barnett is athletic and can roll out, but it seems Wilkins better escapes pressure. I think that quickness and elusiveness makes him better fit to lead this offense.

ASU’s receivers feature great versatility. They’re all different, but it seems there’s one trait they share: Speed. If Wilkins has time to throw, he’ll have options. But even if he escapes pressure and there are broken plays, this year’s receivers will be dangerous.

Folks have discussed many scenarios involving the quarterbacks. What if Wilkins doesn’t play well? How short will his leash be? What if he gets hurt again? How does Brady White fit into all this?

Offensive coordinator and quarterbacks coach Billy Napier last week said a two-quarterback system “isn’t off the table.” It seems likely the competition will be evaluated on a week-to-week basis. But it also seems Graham and staff feel comfortable with Wilkins, his progress and his leadership and comfortability with the program.

We haven’t seen much of Brady White this fall. He’s still recovering from suffering a Lisfranc foot injury against UCLA last season. Graham said White’s injury requires a full 12-month recovery, but White said he could be back before or after that one-year mark. He received a few first-team reps about a week ago, but other than that, he’s only played in 7-on-7 drills this fall.

In my opinion, White’s arm talent is the best on the roster. His precision is something you don’t usually see in college quarterbacks. As he told me one today after practice: “As a quarterback, if you don’t have accuracy, you don’t have anything.” The motto has worked well for him.

His injury was unfortunate. If he were fully healthy, there’s a good chance he would’ve been my pick to win the competition. He threw a ball at Camp Tontozona that I still remember. It was one rep from one practice about a month ago. But it was impressive.

In a 7-on-7 drill in the red zone, White rolled to the left and threw off his front foot. Receiver Frank Darby was in the back corner of the end zone. White lobbed the ball in between three defenders. Darby couldn’t hang on, but it was a jaw-dropping throw.

Talking about White brings up the inevitable question, one Sun Devil fans would rather not ponder: What happens if Wilkins and Barnett both suffer injuries, but White isn’t yet healthy?

Sophomore Dillon Sterling-Cole would need to take over, meaning ASU would have to burn the redshirt for a second consecutive year. Freshman Ryan Kelley most likely isn’t ready and will almost certainly be redshirted. It seems likely ASU would want to redshirt Sterling-Cole, too, so it’d be unfortunate if such a scenario played out.

Bottom line: Wilkins is the starter. He kept the job not by severely outplaying Barnett, but by not playing poorly enough to lose it. But he’s still made strides fans will notice when the Sun Devils take the field on Thursday.