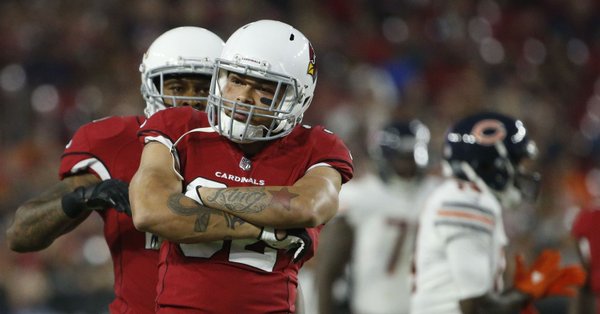 The Arizona Cardinals wrapped up their home portion of the 2017 exhibition season falling to the Chicago Bears in the closing seconds 24-23 Saturday night at University of Phoenix Stadium in Glendale.

Here are five takeaways from the loss.

The Badger Is Back…Tyrann Mathieu has certainly shown flashes of his old self this summer and Saturday did nothing to quell said optimism after he stepped in front of a Mike Glennon pass near the Arizona goal line and returned it 52 yards into Bears’ territory. “I just saw the receiver stem me…so I knew he was running an out route,” he said. “We were in an outside leverage coverage, anyway, so I was just able to slip him and get in front of him.” Mathieu also had two tackles, one for loss.

Still Nothing Special…It could be argued no team in the NFL suffered more special teams’ gaffs than the Bird Gang in 2016. Saturday the Cards seemed to revert back to their old habits when Phil Dawson’s 63-yard field sailed short and wide right. Bears’ wide receiver Deonte Thompson caught the ball towards the back of the end zone and maneuvered his way down the Chicago sideline for a 109-yard (officially 100 yards) “kick six.” You can bet this will make Bruce Arians think twice about attempting extra long field goals during the regular season. He took the blame for the decision on Saturday.

Protecting Palmer…Carson Palmer played the first quarter plus completing 9-14 for 67 yards and a touchdown (99.4 passer rating). After complementing the play of his offensive line last week against the Raiders, CP3 was hit early and often, a scary sight for all Cards’ fans. “It felt good to get out and play against another opponent,” Palmer said. “There are always things that we are working on to clean up…and improve on.” Hopefully pass protection is at the top of the list this week as they prepare for the Falcons next weekend in Atlanta. Arians did say in his post-game press conference he felt Palmer held on to the ball too long against Chicago and didn’t look as sharp as he has been.

No Smoke, But Fire?…wide receiver John Brown, who Arians has voiced his disappointment in for not being able to stay healthy during camp, did not play against Chicago as he continues to recover from a quad injury which has hampered his reps and overall practice time. Due to Brown’s sickle-cell trait injuries need extra time to recover and how have to wonder how much his lack of work in camp will impact his play and production if he’s healthy Week 1 September 10 against the Lions and moving forward.

Dog Days…mentally, you have to wonder where the Cards’ regulars are at this point. It’s been a long camp (which breaks after Thursday’s morning workout in Glendale) but there are still two pre-season games left and three weeks before heading to Detroit. The “routine” will continue but you can bet Arians and his staff will be tightening the screws after going into last season a bit too “relaxed” according to some.