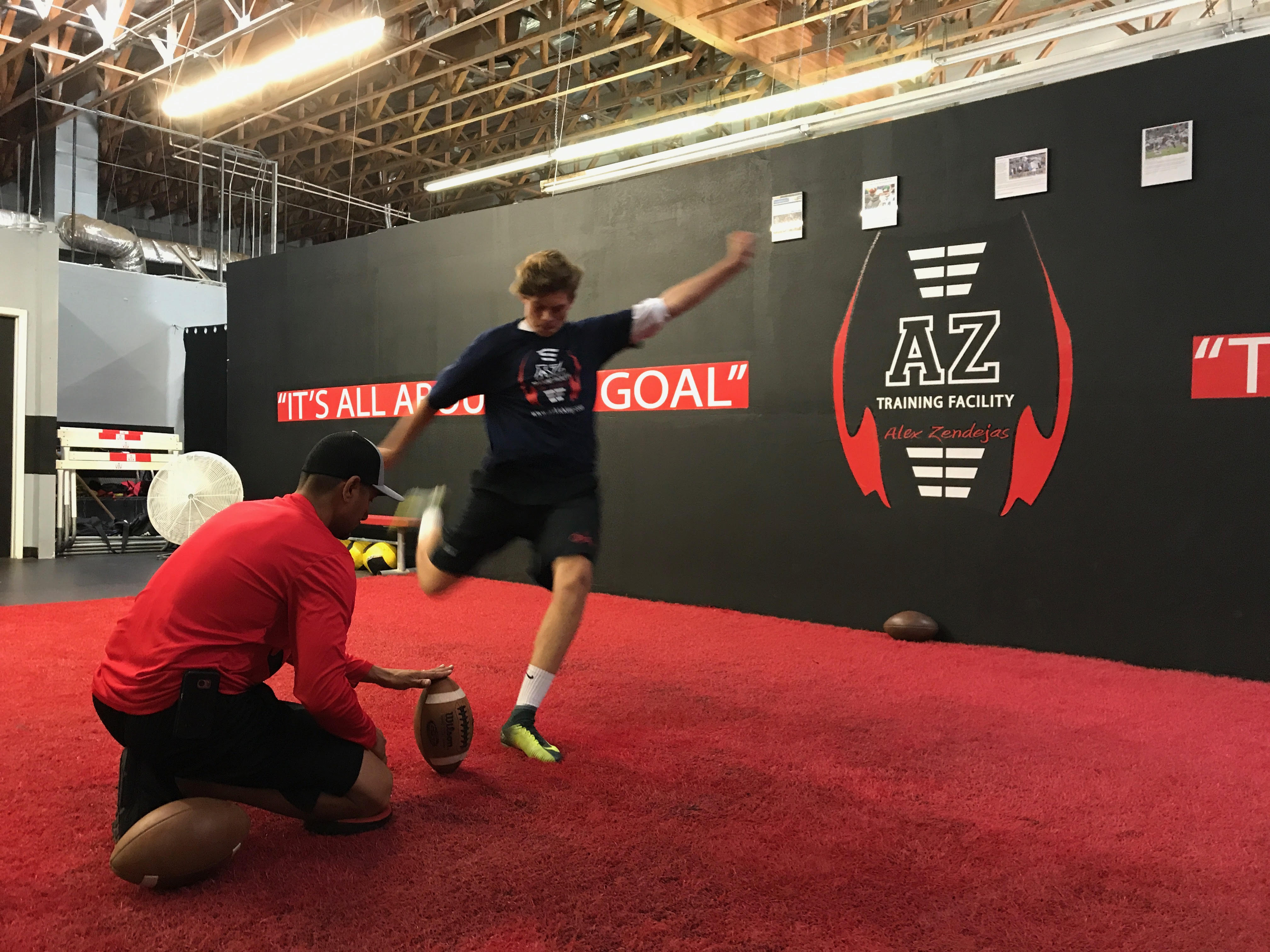 Zendejas Detail Shop sits off Broadway Street in Phoenix bordering Tempe, but that’s all it was until January when Alex Zendejas cut his auto detailing space in half to return to his roots and his family’s identity in the Valley. Now, he’s transformed the other half into what may be the most efficient use of 2,000 square feet known to man.

Upon entering, a red turf mat precedes a brick wall that has a crossbar and two goalposts painted in yellow about halfway up. A treadmill, multiple stationary bikes, a bench press and racked weights sit just to the right of the turf. To top it off, a fan near the entrance blows around cool air to provide an escape from the blistering 110-degree heat outside, though the owners joke it’s used to simulate windy conditions.

The space may be confined, but Zendejas and his son, Alex Zendejas Jr., have made the most of their new kicking gym, where they train kickers 1-on-1 and help them with the fundamentals and mental game while also putting them through rigorous workouts. The idea stemmed from Alex Sr. wanting to try something different when he realized he didn’t need all the space he was paying for, but also from one of his observations over the years.

“We see a lot of kids just going to these kicking camps,” Alex Sr. said to Sports360AZ.com. “It’s good, you need it. You need to be exposed to that competition out there. But the main reason we put this here is because a lot of those kids who go to those camps need to work on the fundamentals of kicking.”

Alex Sr., a former community college kicker, is the brother of former Arizona State kicking great Luis Zendejas and has coached kickers for about 15 years. Alex Jr. received a full scholarship to kick at the University of Arizona and was a three-year starter. Together, they make AZKicking a unique experience kickers can’t find anywhere else, even at most of their high schools.

Fundamentals are key, but kicking is as much mental as physical, if not more. There are slogans written on the gym’s walls. One says, “Think about why you started.” Another goes, “It’s all about the goal.” Two more, which sit above the workout equipment, state, “Pain is temporary” and “Quitting lasts forever.”

When it comes to kicking itself, the Zendejas’ basic principle is not focusing too much on a bad kick or a bad day, but looking ahead. If a kicker is having a bad day, the guys won’t have him kick 100 more balls to correct it, but will help him take a step back and breathe instead.

They believe mental fortitude is developed through struggle, which is inevitable for all kickers.

“You’re going to hit a bad ball, but the next ball? It’s just like falling off a bike,” Alex Sr. said. “You get back up. The next time you fall, get back up. Eventually, you’re going to start getting stronger. You got to go through things to become mentally strong. Struggling is one of the things kickers do. I don’t care who you are.

AZKicking has helped many athletes, including Chandler Basha kicker Becca Longo, the first female to sign a letter of intent to play football at a Division II school or higher. One of its first customers was Brophy Preparatory kicker Jackson Garcia, who is entering his junior year.

Quick spotlight on @jacksoncgarcia who has been tearing it up this summer. He’s one of the hardest workers and the results are proving it pic.twitter.com/7QYWu90tJz

Garcia has already won three field goal competitions at competitive kicking camps he’s attended this summer. Not only has he added 10 yards to his kicks since starting with AZKicking, but he said his mental game has improved.

He’s learned to focus less on a bad day and to love the pressure, two areas he said he struggled with before discovering the Zendejas guys.

“Coming in, I didn’t really like the pressure as much because I was not as confident as I am now,” Garcia said to Sports360AZ.com. “After coming in and working on the fundamentals, getting everything right, I’ve grown in confidence so much that when it comes to pressure, I love it. I want to perform well.”

The athletes aren’t the only ones being rewarded, though. The guys share in their athletes’ success, but never take credit for it.

“Having a past and playing Division I and arena ball, you see some things and you also learn some things,” Alex Jr. said. “But now coming back and being able to teach the next generation, sometimes it feels more rewarding helping them out than actually playing.”

While Alex Sr. spends parts of his day working in the auto detail side of the property, Alex Jr. is a full-time trainer. AZKicking works out about eight to 10 athletes per day, and most of their its clients come in two or even three times a week.

The gym is growing rapidly, but the Zendejas guys swear they haven’t promoted themselves. As word got out and traveled, wide receivers, offensive linemen, athletes from other sports and even their parents started scheduling workouts.

“I think we’ve been a little low-key because we understand we don’t have the big facility to hold a lot of people right now, but we’re working to it,” Alex Sr. said. “We’re going slow so we’re not neglecting our kickers or athletes. It’s 1-on-1.”

Alex Sr. said he and his son are trying to expand AZKicking’s space so they can work with more athletes. But they don’t ever want to lose the personal 1-on-1 feel, so they plan to hire more coaches who share their philosophy when the time comes.

Even then, the guys will still pride themselves on being accessible 24/7. They say they’re a call or text away. Kickers regularly send Hudl film to diagnose issues in their kicks, but sometimes they just need encouragement after a rough outing. Either way, Brophy’s Garcia estimates it may take 20 minutes at most to receive a response.

Alex Sr. sometimes treats himself to the steam room, but always wonders whether his phone is buzzing right outside. He may physically leave his double-sided office, but he never really leaves one of its halves.

“I don’t care if you had a bad weekend, a bad camp, a bad game, I get that phone call at 1 in the morning and one of my kickers is not having a great day or something, I’m there for him,” Alex Sr. said.

The kicking gym looks modest, but kickers and other athletes regularly leave feeling the workout and ready to apply what they learned. As all coaches do, Alex Sr. and his son want the hardest workers, the ones who care the most.

The best running joke in the gym may be the one where the Zendejas guys quip, “Easy day” to their athletes who are in for a workout. When they hear that, all the athletes can do is smile.

If only it were true.

In reply toEliav Gabay
@eliavgabay @JordyHamm @POTUS @Sports360AZ @bradcesmat @spurge_ @EricSports360AZ @devonhenry77 @ClaudiafCollins @WBBWorldWide @WNBAFansOnly @WBBDaily Funny how the thing she complains about is the same thing she magically misses when she gets locked up abroad for brining an illegal substance into a foreign country. Play stupid games, win stupid prizes. Also, where is her accountability?

Eliav Gabay ·
@eliavgabay
“Freedom means something completely different to me this year.”