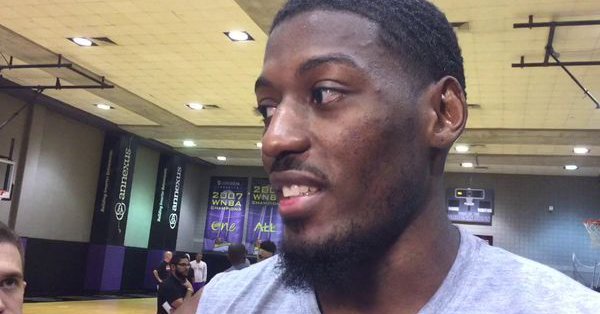 Paul Watson didn’t get into his Phoenix hotel until 4 A.M. Wednesday morning because a layover in Atlanta threw a wrench into his plans following a pre-draft workout in Toronto with the Raptors.

But after a few hours of sleep, the former Paradise Valley High School star found himself working out for his hometown team in the same building where one of his favorite NBA players, Shawn Marion, once played.

“I watched his game all the time, got his jersey,” Watson said on the practice court at Talking Stick Resort Arena following his workout. “I was a big Matrix fan. I love Joe Johnson’s game, he’s somebody I try to model quite a bit, too.”

“It’s amazing. Growing up here and watching the games…. it’s just amazing to have this opportunity. It’s a blessing. ” – Paul Watson pic.twitter.com/RzemUTmZCw

When talking about his passion for basketball and its roots, Watson said his mother, Rayna, tells everyone the same story about his first word.

They were once in a store when Paul was a baby. During their trip, he saw a ball and as most children would, he reacted.

Many years later, his high school coach raves about that same passion. Mark MacGowan spent 27 years with Paradise Valley basketball — eight as an assistant and 19 as the head coach — before resigning at the end of this past season.

MacGowan said he believes Watson is the best player to play for the Trojans during his tenure there. He talked about the lengthy 6-foot-7 frame and his ability to play above the rim, which was displayed when Watson performed in the 2017 College Basketball Slam Dunk Contest in March. He also mentioned the ability to play and guard multiple positions.

But what stood out behind the scenes was his work ethic.

“He would practice when he was sick, he was just committed,” MacGowan said. “He was a leader, was always on time for practice. One of the last guys out of the gym. Occasionally after practice, he would go home to eat then come back and practice more. He would practice on weekends and days we didn’t have practice.”

Watson is not listed on DraftExpress’ current mock draft, but that doesn’t mean he has no place in the league. Following Watson’s workout with Phoenix, Suns assistant general manager Pat Connelly said he has the makings of a “three-and-D” specialist, someone who puts almost all his energy into perimeter shooting and defense.

“I think he’s long, he’s athletic as a defender,” Connelly said. “He shot the ball pretty well in college, continuing to shoot the ball well from the NBA 3-point line, he’ll have to grow into that.

“He’s got a good natural frame to start working on it.”

When Watson spoke to the media shortly after Connelly, he agreed with that assessment. He said he can play both ends of the floor, but takes pride in his defense.

During his senior year at Fresno State this past season, Watson averaged 11.4 points, 5.2 rebounds and 1.4 assists per game.

“I’m versatile, can knock down open shots and a guy who can get in the paint and finish around bigger bodies,” Watson said. (I’m a) very versatile guy who can do anything that’s asked of me by the coaching staff night in and night out.”

MacGowan said there haven’t been any NBA scouts who have reached out to him yet. But if they did, he said he may decide to laud Watson’s character before his basketball ability.

Watson played club basketball for the Compton Magic, but MacGowan said he rarely missed any PVHS basketball practices, games or events. When he was with his Paradise Valley teammates, he led by example with the way he practiced.

“When you have your best player as your hardest worker and a great teammate, other kids just fell in line with that and looked up to him,” MacGowan said. “It meant the world to us as far as our program.”

Paradise Valley was close to winning state championships in Watson’s sophomore and junior years before finally winning one when he was a senior. After a solid career at Fresno State, he’s looking to take the next step and fulfill a lifelong dream shared by all basketball players.

All he needs is a shot.

Watson may not be on any mock drafts and it seems unlikely the Suns would draft him with either of their two second round picks, but what Connelly said on Wednesday could be encouraging.

“There’s value in everything,” he said. “It may not be for first round or second round, but it could be for Summer League, it could be for the Northern Arizona Suns. I think at every level and every time we have a workout, there’s different evaluations for every guy.”