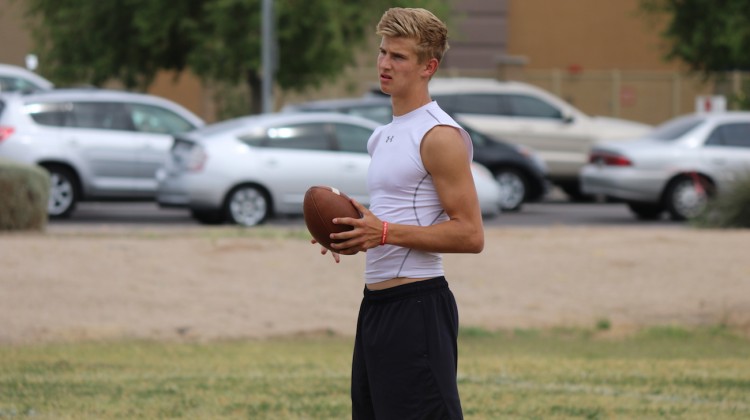 What a busy offseason it has been for Hamilton quarterback Tyler Shough.

After a solid junior year where he threw for 2,079 yards with 27 touchdowns and nine interceptions, he received offers from predominantly Ivy League and Mountain West schools.

The 6-foot-5, three-star quarterback wasn’t done though. On May 15th, he was invited to the Elite 11 finals, the premier event for high school football quarterbacks. 25 quarterbacks are invited to work out and learn from the likes of former NFL quarterback Trent Dilfer and current Pac-12 analyst Yogi Roth with guest coaches like Josh Rosen in attendance as well.

After three grueling days of competition, going over film and discussing what it means to be a leader, the group of 25 is narrowed down to 12, who will compete in The Opening in Beaverton, Oregon later this month.

On Monday, Shough was one of those 12. He is now a part of a group of 166 of the top players in the nation headed to Nike HQ, where there will be combine testing, a 7-on-7 tournament and lineman competitions.

While Shough impressed many with his hair coming into the competition this weekend, his arm and decision-making stood out when it was all said and done.

In Scout.com’s post-competition analysis, mountain and island region analyst Blair Angulo hinted that a fourth star may be coming to the Hamilton quarterback, and national recruiting analyst Greg Biggins had this to say:

What does he do wrong? What’s a weakness in his game? He’s smart. He’s decisive. He throws the ball well, on-time. He can make all those throws. It seems like he has a good head on his shoulders. Functional intelligence is the word, where he can process quickly and make the correct reads.

Recruiting-wise, Shough has narrowed his list of colleges down to South Carolina, North Carolina, Michigan, Cal and Indiana. Florida State was among that group but that may not be the case anymore according to Angulo. Shough told azcentral he hopes to have a decision in the coming weeks and as early as June 10th.

Tyler Shough and North Canyon wide receiver Solomon Enis will represent Arizona in The Opening, held at Nike Headquarters in Beaverton, OR from June 28-July 3.