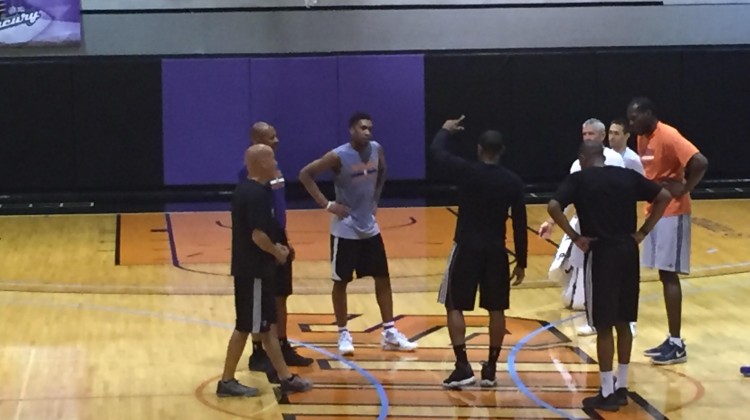 When Suns assistant general manager Pat Connelly and other team officials had dinner with Kentucky guard Malik Monk on Monday night prior to working him out Tuesday, they noticed one personality trait they’ve also seen in his game.

When Monk, a prolific scorer, spoke to the media minutes after his individual workout in Phoenix ended, that confidence became apparent.

Asked about his range, he joked.

He was then asked how his range compares to that of Golden State Warriors point guard Stephen Curry, a two-time NBA MVP and someone many experts and fans consider the best shooter in NBA history.

“Mine’s further than his,” Monk joked.

Monk said that confidence comes from his mother, brother and uncle, all of which are confident. His brother, Marcus, played wide receiver for the Chicago Bears and also played professional basketball in Germany.

The Phoenix Suns have the fourth overall pick in the NBA draft, which gives them a wealth of options. Monk is projected to go eighth overall to New York in DraftExpress’ latest 2017 Mock Draft and the Suns are projected to take his Kentucky teammate, point guard De’Aaron Fox.

If only looking at mock drafts, it seems unlikely the Suns would draft Monk at No. 4. But he’ll let his confidence speak on that.

“I feel like I’m the number one player in the nation right now,” Monk said. “I’ve always been this way. I’m not going to change.”

His 19.8 points per game ranked second nationally among all freshmen and he was given the 2017 Jerry West Award honoring the country’s top shooting guard. He was also a consensus second-team All-American.

His best performance at Kentucky was when he scored 47 points against North Carolina — the eventual national champions — in December, the fifth-highest mark in Division I college basketball last season. Monk said he shot the ball well Tuesday, but could’ve done better.

Although Suns general manager Ryan McDonough has said the team will consider many players for its fourth overall pick, finding current Suns guard Devin Booker a valuable sidekick is the top priority. Shooting is at a premium in today’s league, Connelly said, so a team can never have too much of it.

But just because a player is a good shooter in college doesn’t mean his skills will translate to the NBA, where the 3-point line is further from the basket. Connelly said he doesn’t foresee that being an issue with Monk.

“He has one of those strokes that adjusts well to the deeper shot,” Connelly said. “He shoots it easy. We were even shooting shots behind the NBA (3-point line), and he still kind of had the same form and it went in a lot.”

Everyone knows Monk can score, but what else can he offer? Playing alongside Fox, Monk didn’t have many opportunities to play on the ball and showcase his play-making ability.

However, Monk said he is just as comfortable on the ball as he is off it.

“I was thankful I had Fox, but I think I’m pretty good at it,” Monk said of being a playmaker. “I read ball screens well, I read down screens well.”

On defense, Monk said he’s trying to show teams he can guard one to three — he can stay with fast point guards or body up bigger small forwards.

Months after their December matchup, Kentucky and North Carolina met in the Elite Eight and Monk almost played hero once again. Down four in the game’s final moments, he hit a 3-pointer to trim the lead to a point. Moments later, with the Tar Heels up three points, Monk hit a contested 3-pointer to tie the game.

Everyone remembers what followed as North Carolina’s Luke Maye hit a game-winning shot with just 0.3 seconds remaining to eliminate Kentucky and effectively end Monk’s collegiate career. But the important part for Monk and teams looking to draft him is what he showed in the final seconds of the loss: Hitting the big shots in the biggest moments.

“Some guys are shooters, some guys don’t have that gunner mentality,” Connelly said. “He has both, which you kind of like to see with guys who can put up huge numbers in kind of a pressure-filled environment. When the lights are on, he likes hitting big shots and it feels like he plays better in that kind of situation.”

The running joke is that the Suns are “Kentucky West” as guards Eric Bledsoe, Brandon Knight, Tyler Ullis and Booker are all former Kentucky players. Connelly said it starts with Kentucky head coach John Calipari recruiting supreme talent before polishing those players during the usually short time he has them in Lexington, Ky.

Kentucky players are usually exposed to a higher level of basketball, Connelly said. They practice against one another in college, play top teams during the season and even scrimmage against NBA players when former Wildcats return to campus.

Last season, Booker returned to Kentucky and performed a shooting drill with Monk.

“We both didn’t miss that much,” Monk said.

But when asked about what prepares Kentucky players most for the NBA, Monk’s answer wasn’t about basketball. He didn’t talk about playing against top talent or scrimmaging former players during the summer.

He instead pointed to the media scrum gathered around him after his first pre-draft workout with an NBA team.

“This right here,” said Monk, whose next workout will be with the Orlando Magic. “Cameras everywhere wherever you go. Fans everywhere. People everywhere trying to take pictures whenever you go out in public.”