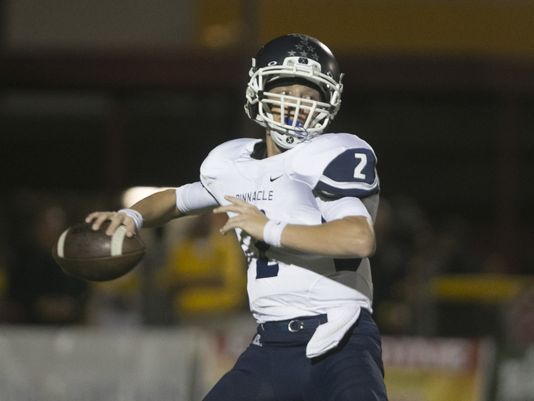 From Day One, Spencer Rattler impressed with his poise, confidence and cool demeanor. In his freshman debut against the defending state champion Chandler Wolves, Rattler got hit. A lot. But the Pinnacle quarterback never backed down and he never really seemed to look flustered.

That’s been a theme for him throughout his career.

That’s what Oklahoma will get in their newest commit.

I want to thank God, my family, and my coaches for guiding me through this process and giving me this opportunity! pic.twitter.com/5cdXu6N4Pg

In two years with Pioneers, Rattler has thrown for 5,274, 48 touchdowns and 19 interceptions. He added seven rushing touchdowns. Evading tacklers, buying time, and making plays with his arm and legs has been a constant for the slippery quarterback.

That has caught the attention of a lot of prominent college programs around the country. Rattler has been one of the more recruited players in the state in recent years, holding offers from the Sooners, Alabama, Arizona, Arizona tate, Colorado, Kentucky, Memphis, Miami, Michigan State, Notre Dame, Oregon State, Syracuse, Texas, Texas A&M, UCLA and Utah.

Rattler recently visited Oklahoma in one of new head coach Lincoln Riley’s first junior days. The trip was fruitful for the Sooners, receiving a commitment from Rattler and Austin Stogner, the top tight end in the 2019 class.

The Sooners also have ties to the Valley with tight end Mark Andrews, one of the top wide receivers to ever come out of Arizona, on the roster. Andrews has already been tabbed the top tight end in the upcoming NFL draft. His junior season totaled 479 yards and seven touchdowns.

For Rattler, the 6-foot-1, 175-pound quarterback, football is not his only love. He is also quite the basketball player, averaging nearly 12 points, four rebounds and an assist per game as a sophomore for the Pioneers.

Sports360AZ released a documentary on Rattler’s journey last May. He goes in-depth on his upbringing, family, football, basketball and recruitment in “Spencer Rattler: Unrivaled.”