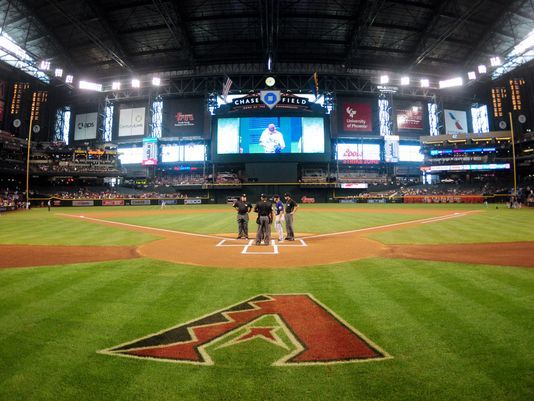 Major League Baseball Commissioner Rob Manfred visited the Diamondbacks on Tuesday as a part of his initiative to visit all 30 clubs.

“It’s important I think for those of us in New York to be out visiting the clubs,” Manfred said. “The heart of our game is in our local markets, that’s where our business gets done, so you come on a visit like this, you always get an opportunity to learn something.”

The Commissioner’s visit to Chase Field comes at a time where the Diamondbacks are currently in a battle with Maricopa County regarding the state of the stadium. On Tuesday, Manfred addressed the issue of the Diamondbacks’ home.

Manfred said that the offices in New York have had discussions with MLB executive John McHale regarding Chase Field. McHale was a part of the construction of both Coors Field in Denver and Comerica Park in Detroit.

“(McHale is) extremely knowledgeable about the state-of-the-art, what’s required in terms of renovation, capital investment in stadiums,” Manfred said. “We’ve reviewed various studies that have been done, we concur wholeheartedly with the Diamondbacks’ position that there are substantial needs here with respect to this stadium to keep it as a Major League quality stadium.”

The question at the forefront of the conflict between the County and the Diamondbacks is who is responsible for the necessary repairs?

“It would be unusual for a tenant to be responsible for those sorts of capital repairs and we think the Diamondbacks have taken a correct position,” Manfred said.

The Diamondbacks leaving Chase Field altogether is not something Manfred is ruling out.

“If for whatever set of reasons those expenditures can’t be made, there will come a point in time where with this franchise, like any other franchise, we reach the conclusion it’s not a major league quality facility, we’re going to look for an alternative,” Manfred said.

Baseball stadiums are not like other sports stadiums, in due part to the amount of games that are played each season and baseball’s “unique ability to generate economic activity,” Manfred said.

“My favorite current example is Washington,” Manfred said. “Where that stadium was built, you would not have gone on a bet. Now, people go there all the time, there’s tremendous economic development around that stadium to the benefit of not of the club solely, but more importantly to the city and the taxpayers.”

It has been a year since the lawsuit was first filed. On Monday, the County announced that it has stopped it’s search for a new event manager for the stadium raising further questions about the future of the Diamondbacks at Chase Field.