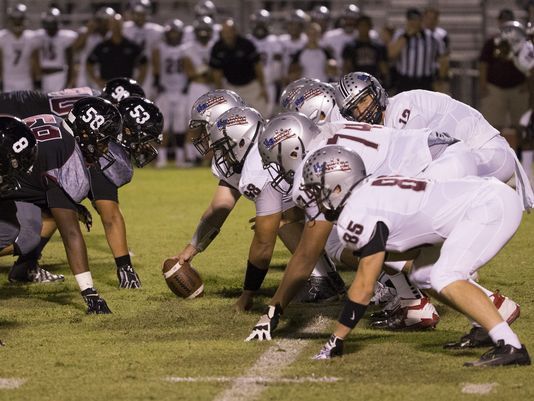 ASU offered two underclassmen today at camp, and one of them hasn’t played varsity football yet.

I missed the first part of the day with the 2020 and younger prospects but when I walked up, several people mentioned to me that 2020 offensive tackle Noah Nelson from Williams Field did a nice job.

I called Williams Field head coach Steve Campbell and he raved about Nelson’s upside. Nelson is all of 6-foot-6, 260 pounds, has a thick lower half and bends well. While he hasn’t played varsity football yet, he has the tools. New ASU offensive line coach Rob Sale extended an offer.

The other offer went to 2019 prospect Ty Robinson from Higley. Robinson already had an offer from Iowa State. ASU offered today as an athlete. He played all defensive end today but he has the frame to grow into an offensive tackle, three-technique but also plays tight end for the Knights. His sophomore tape is solid and I think he has a chance to be one of the top recruited prospects in that 2019 class.

There were a handful of payers that have division-one offers; they include Deer Valley’s Joey Ramos, Hamilton’s Hunter Mayginnes, Verrado’s Sean Anderson, Avery Demmons from Higley and Glendale Community College’s Manny Orona.

Ramos was the top prospect there, as he was the only offensive lineman with a Power 5 offer. It showed. He plays with great technique. He plays left tackle now and might have the feet to do it but does lack ideal length. I think he would be a great guard.

Mayginnes showed great improvement since I saw him last year. He leaned up a little and looked better than expected running his forty. He has played right tackle for the Huskies and possibly could play there but played right guard most of Sunday and I think that is his spot in college. He currently has one offer from Idaho and that shocks me.

Anderson is giant! Tallest kid there. He as an offer from Montana and they love those giant linemen. He has developed his body quite a bit and looks better physically. He plays left tackle for the Vipers and has the length to do it. I want to see him keep working his feet though. ASU played him at guard today and that may be his best shot at played at the FBS level.

Demmons was with the d-line but they sent him down to work with the o-line. He hasn’t done it much and it showed. He lacks the technique but he has tools and at 6-foot-4, 290 pounds, was one of the better looking kids there. He has offers from Arizona, Iowa State and Idaho.

Orona is intriguing. He played locally at Trevor Browne before making all-conference last year at GCC. He plays left tackle but at 6-foot-3, does not have ideal length to stay there at the Pac 12 level. He played left guard today and has excellent feet. He weighed in at 296 pounds and ran 5.2 in the forty. Memphis has offered and multiple mid-major programs are on the verge of offering.

I already mentioned Robinson above and I like his upside.

Manoa is a tough strong kid inside. Very tough for high school OLs to block him because of his strength, he benches 400 pounds. Also tough to block in this 1 on 1 setting. Thick and strong, more of a run stuffer. Has multiple mid-major and FCS offers and because of height (in the 6-foot range), that will scare some people off.

Golden and Hayes are very similar prospects, similar body types and both get off the ball well. Golden has Virginia, NMSU, Air Force and Montana offers while Hayes has Fresno State.

There are some other guys that I thought did a really nice job and I wonder why they aren’t being heavily recruited.

The first one that comes to mind is Xavier Robinson-Delgado from Deer Valley. He has the arm length to stay at tackle, has the size (6’4, 300), has good feet and can play guard. Someone will jump on him and get a steal.

I also thought Brandon McCrea from Deer Valley and Jozia Myers from Campo Verde did a nice job.