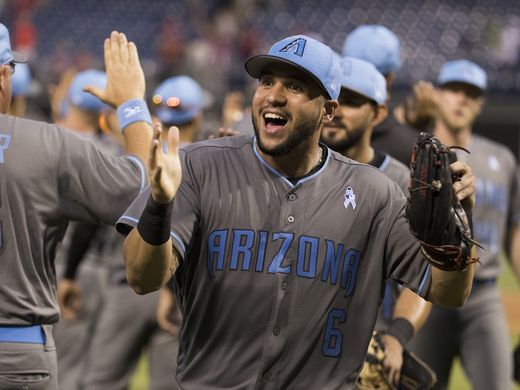 On this Father’s Day weekend, the Arizona Diamondbacks sweep the Philadelphia Phillies on the road. The Snakes have won seven straight games and ten of their last eleven games. Their 44-26 start to the season is the best in franchise history.

Godley Does It Again

Zach Godley has been one of the more pleasant surprise for Diamondback fans, and he continued his stellar season with a career-high eight strikeout performance whlile throwing a 5.2 innings pitched and giving up just one earned run. He now sports a 2.34 ERA in 2017.

Pat Corbin, who had struggled lately, also had a solid performance, throwing six innings and giving up two earned runs in a win on Friday.

In perfect Paul Goldschmidt fashion, the Arizona first baseman is quietly having one of the best seasons of his career. Goldy is hitting .324 with 60 runs scored, 16 home runs 57 RBIs and 13 stolen bases.

This series, he went 5/15 with a home run, two runs scored and four RBIs.

The Arizona Diamondback bullpen did not allow a run in this series. They threw 11 innings, gave up seven hits and two walks while striking out 14. Fernando Rodney has not given up an earned run since April 29th and hasn’t given up a hit in his last eight appearances. He struck out the side in Sunday’s game.

Good news for the Diamondbacks as A.J. Pollock is on the right track to return from injury starting his rehab assignment last Saturday. While Pollock will be a welcome addition and just another weapon in the potent Diamondback lineup, those who were replacing him this series produced as well.

A.J. Pollock is done for the night (scheduled 5-inning start). He finishes 1-for-2 with a walk and this double. pic.twitter.com/mLAThBBDY7

Rey Fuentes got two starts at center while Gregor Blanco received one, and combined they went 6/15 with four runs and three RBIs, including Sunday’s go-ahead home run in the 10th inning by Fuentes that clinched the sweep.

After the Diamondbacks sweep, the Snakes are tied with the Dodgers and each are a half-game behind the NL West-leading Colorado Rockies. The D-backs look to make up some ground as they head off to Denver in a three-game series against the Rockies.

Zack Greinke, Taijuan Walker are slated to pitch on Tuesday and Wednesday, and a starter will be determined for the series finale.