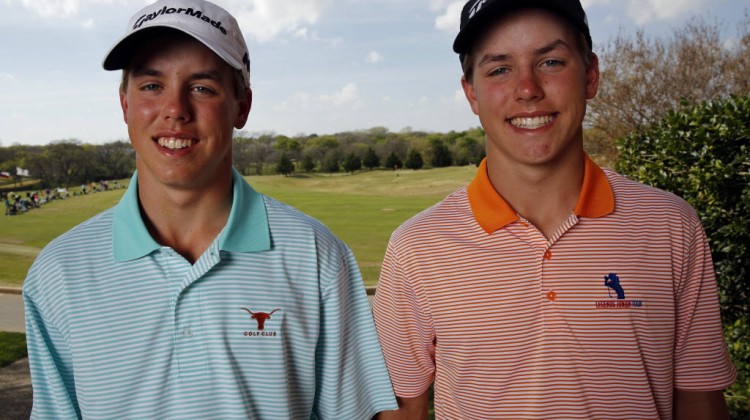 Twins it would be.

“I hoped we had a couple little golfers in there,” he said to Sports360AZ.com.

Of course. How could he think anything different?

After Charles had so much golf success, his son Kyle played collegiate golf at the University of Texas. Those family connections alone would suggest twin brothers Parker and Pierceson Coody would grow up playing golf from a young age, but not so.

Instead, they didn’t start seriously practicing golf until the summer before seventh grade and didn’t play in their first competitive tournament until the summer going into eighth grade. Pierceson remembers a time when the brothers were about 10 years old and took a weekend trip to Abilene, Texas, to visit their grandpa. Charles was about to take them golfing when they halted him and told him they didn’t want to go.

“It’s really hard when you’re younger because your friends just don’t play golf at that age,” Pierceson said. “It was really hard to go out there and be like, ‘Okay, I’m going to go out to the golf course for a few hours by myself’ at 7-10 years old.”

Charles accepted that because he never pushed the boys’ father into playing golf and figured he would let his grandsons come around naturally. After all, he always thought they’d eventually become interested in golf because they loved spending time with their father Kyle, who was still an avid golfer.

The Coody boys just played in the American Junior Golf Association’s Thunderbird International Junior at Grayhawk Golf Club in Scottsdale last weekend. Parker finished tied for 17th place in the Boys Division and Pierceson tied for 23rd out in a field of 48 of the world’s best male junior golfers.

“We got into golf again because we just wanted to play golf,” Pierceson said. “The goal was never that we were going to play college or professional golf. We played golf because we wanted to, and that’s where we have a lot of motivation to go practice and do things, because we want to do it on our own.”

Playing golf with the last name Coody isn’t easy. At most golf tournaments the boys play in, Pierceson said, random strangers approach them and talk to them because of their last name. The pressure is there and they know it.

But what’s most important is that the pressure never came from Charles. In fact, he recalled a time where he shot a 68 in a local golf tournament in Abilene and on the same day, Kyle didn’t score any points in a basketball game during his sophomore year of high school.

A local sportswriter wrote a story with a headline that read, “Charles Coody 68, Kyle Coody 0.”

“I took great offense to that and that reporter definitely got an earful from me when I got home,” Charles said. “I’ve always tried to tell my son and my grandsons, ‘You’re who you are. You have nothing to try and prove to me.’”

When the boys started playing golf again in middle school, Kyle sat down and talked to them about the inevitable pressure they’d face, just like his own father did for him many years ago.

“He said, ‘People are going to want to talk to you because you play golf, and there are going to be a lot of expectations around you,’” Pierceson said. “It’s just something he got us used to when we were really young.”

The boys have symbolic items in each of their rooms that make their journey seem like it has come full circle. Pierceson’s is his father’s Texas letterman jacket that sits on a decorative chair and represents their father’s past and the twins’ collegiate future.

They are both committed to play golf at the University of Texas and will sport the same burnt orange their father did many years ago.

“I’ve always been a UT fan growing up,” Pierceson said. “I never thought about golf or anything, I just always kind of liked watching UT football and basketball games.”

Parker has a Masters pin flag that hangs right above his desk. He estimates it has signatures from about 35 Masters champions, including legend Jack Nicklaus. Parker has been to the iconic tournament in Augusta, Georgia., six times, but the brothers haven’t been able to go in recent years because they have missed too much school for golf.

Nonetheless, his father and grandfather always make sure to take the flag each year and bring it back with one more autograph form a champion added to its collection. The pin flag symbolizes the brothers’ commitment to golf after a childhood where they loved football, basketball and baseball more.

Parker can spot it from his bed. He sees it when he goes to sleep, wakes up, or is just hanging out.

“It kind of just reminds me of my granddad and what I’m capable of,” Parker said.

Although the pin flag reminds him of his grandfather’s unique accomplishment many years ago, Charles is relatively hands off with the boys’ golf games. Kyle helps the boys with their golf while Charles dubs himself a “spectator grandfather” who is always there if they have questions, but doesn’t interfere.

He attends as many tournaments and matches as he can, but he doesn’t add another voice because he fears it may confuse his grandsons. Even if he is saying the same thing as Kyle, Charles says, the way he says it may be different and that may stunt the twins’ golf development.

“Are there times when I would like to say something? I’ve got to be honest, yes,” Charles said. “But I don’t want to be interfering. I will admit, it took me a little while to learn that.”

The brothers have an interesting dynamic because they compete on the course, but they are still each other’s biggest fans. They insist they are equals as neither has rattled off a long streak of placing higher than the other in tournaments or matches.

Their goal is to always finish first and second in golf tournaments. They haven’t done so in an American Junior Golf Association tournament yet, but they said they have done so a couple of times during high school matches.

Off the course, their focus shifts from finishing one and two, to just finishing first.

“When we get grades, we’re always checking each other’s — (I check) if I beat him on the pre-calculus test or whatever it may be,” Parker said. “In school, we’re very competitive with our grades. Obviously, everyone knows where we are with our golf, but (we’re competitive with) almost everything in the house.”

They may always be competing, but together they’ve become Texas’ dynamic golf duo, a talented package deal. About a year after their first competitive tournament, the boys started receiving letters of interest from colleges when they were high school freshmen.

They were admittedly surprised and so was their father, who didn’t even know that colleges contacted high school athletes that early. The letters were a bonus, something they didn’t strive for, but were grateful to receive.

“We didn’t think, ‘Let’s go play in college,’” Pierceson said. “We were just like, ‘Oh, I like playing golf, let’s go play some tournaments.’ Playing college golf was not even an idea at that time.”

Parker and Pierceson aren’t identical twins, but they’re so close that many people outside of family members can’t tell them apart. Together, they’re looking to take over the golf word as rising juniors who are only expected to get better with time.

It once looked as if they would stray from the golf path, but eventually they found their way back. While it wasn’t anything their grandpa Charles was trying to force, it makes him happy and proud nonetheless.

“In a way, it feels like mission accomplished if there was a mission,” Charles said.