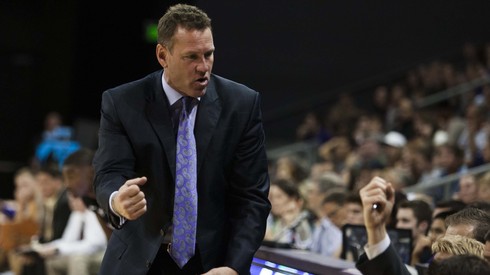 The wait is almost over for Grand Canyon University. Since making the move to Division I the Lopes have sat patiently for nearly four years to become post-season eligible. Now the question is, will it be as a member of the Western Athletic Conference?

Managing Director of USA Basketball and Valley icon Jerry Colangelo, who GCU named their College of Business after, is well aware of the altering landscape within college athletics.

Colangelo believes once the “Power Five” conferences (Pac-12, Big 10, Big 12, ACC, SEC) were established for football, the smaller “mid-major” programs were left to fend for themselves in not just football but all others, as well.

There have already been whispers of GCU of leaving the WAC but Colangelo proposed the possibility of a unique situation moving forward for Grand Canyon and similar schools from smaller conferences.

“I would foresee over the next four or five years a lot of schools making changes,” Colangelo explained. “Maybe a new conference developing.”

Regardless of where the Lopes land in terms of conference affiliation, they are well-positioned for future success, especially in basketball under Dan Majerle whose close relationship with Colangelo dates back to the late 1980’s when he was a first-round pick of the Phoenix Suns.

Nothing to lose. Bubbles to burst.@DanMajerle‘s @GCU_Hoops is the mid-major making noise in the desert. https://t.co/x08pgwJdIR

“The program is in great hands with Coach Majerle and the staff he’s put together,” he said after GCU registered their second consecutive 20-win season. “It’s an exciting time for GCU.”