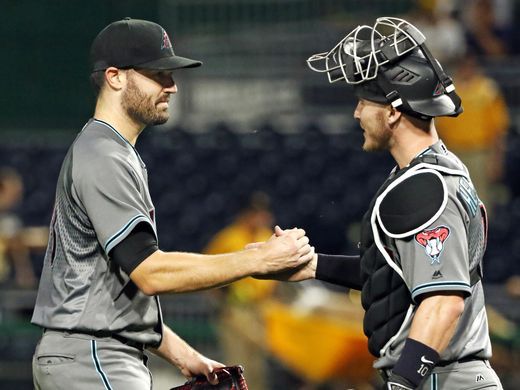 After 14 innings on Wednesday, the Diamondbacks pulled out the series win against the Pirates behind solid relief pitching from TJ McFarland and clutch hits in extras from Nick Ahmed and Chris Owings. After dropping game one on Monday on a walk-off home run from Andrew McCutchen, the Dbacks came back out and shut out the Pirates on Tuesday behind a complete game shutout by left-hander Robbie Ray. Then after more than six hours of battling in extras, the Diamondbacks got the 6-5 win to take the series.

Tuesday night was Ray’s first career complete game shutout. Ray allowed only four hits, with no walks and 10 strikeouts. The last Dback to have a similar outing was Randy Johnson in 2004 in his perfect game.

Big thanks to my teammates for backing me up tonight. that was a lot of fun #OurSeason

“His fastball command was outstanding,” catcher Chris Herrmann told Fox Sports Arizona on Tuesday after the win. “He could land his curveball and slider for strikes. Whenever we were ahead I felt like it was either a punch out or just a weak ground ball somewhere. You can’t ask for anything better than that.”

Ray joins 13 other major league lefties who have three straight outings with seven-plus scoreless innings where there were four or fewer hits allowed.

Battle in the Box

In the 14-inning win on Wednesday, the Dbacks found a way to battle at the plate. Jake Lamb went 3-6 with a triple and two doubles. Paul Goldschmidt hit his 12th home run of the season. Nick Ahmed had a home run in the top of the 11th to put the Dbacks ahead, before the Pirates would tie it back up at five in the bottom of the frame. Then, Chris Owings had the go-ahead RBI single in the 14th.

“I think it speaks volumes about this team,” manager Torey Lovullo told the media after Wednesday’s win. “We didn’t shut down, we showed toughness. It was a really special day for this team as we’re moving forward.”

Torey Lovullo after today's 14-inning @Dbacks victory: "One of those character wins." pic.twitter.com/xejchll8K8

McFarland Gets Win in Extras

Zack Godley had another impressive outing for the Dbacks on Wednesday. Godley went six innings, allowed three runs on seven hits and struck out six. With the offense backing him up, ahead 3-2, he was in a good position to get the win until Fernando Rodney came in in the ninth and blew the save, his third blown save on the season.

Fast forward to the 11th, JJ Hoover gave up a home run to Pirates’ Jordy Mercer for his first blown save on the season.

After the two blown saves and an extended rain delay, Lovullo went to TJ McFarland in the 12th. McFarland went three hitless innings with one strikeout to get his third win of the season.

“He really slowed the game down,” Lovullo said of McFarland. “The tempo of the game was moving really fast up until the rains came, but he gave us a chance to win the game.”

The Diamondbacks continue their 11-game road trip in Miami for a four game series against the Marlins starting on Thursday.

Hear more thoughts on the current state of the Dbacks from ESPN insider Pedro Gomez here.