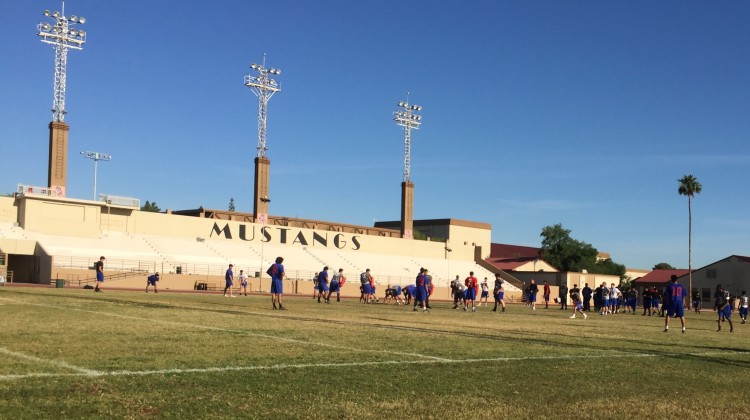 When Bernie Busken took the head coaching job at North High School just four days before practice began in fall 2014, it marked the sixth time he’s had to turn around a football program. But for some reason, North High felt particularly special.

The inner-city school is located off East Thomas Road in Phoenix. Its’ stadium features one-sided seating as a fence on the opposite side separates football from the surrounding neighborhood which is full of small one-story houses and is a modest scene with nothing particularly flashy to catch an outsider’s eye.

But when Busken arrived, he noticed it resembled his childhood neighborhood in Oklahoma. He said he made it out of that neighborhood because of football and education, and wants the same for his North High players.

“All of us want better for our kids,” Busken said to Sports360AZ.com. “You want them to have a better car, be smarter and not make the same mistakes you made. Well that’s what I want for these kids.”

When Busken took the job, he said it seemed like nobody had been there for the kids. Nobody had worked them hard and it showed because he initially had a difficult time getting players to show up for practice.

He called it the “most pitiful situation” he’d ever seen.

North High went 1-9 in Busken’s first year with the program and he said the only positive was that no one quit the team. He had just one assistant coach that season, a detail indicative of where a difficult turnaround project started. The Mustangs followed that season by going 6-4 and 5-5 the next two seasons.

Busken is optimistic about the upcoming season because his team returns 17 starters and will have a full coaching staff.

While on-field results are nice, he coaches for a different reason.

“One of these days, football is over, so I want them to be a productive member of their community wherever they decide to work,” Busken said. “They got to be on time or they get fired. It’s not about running laps, it’s about being a good person in your community and a good dad and a good husband.”

After leaving Mountain View in 2002, ending a tenure where he won more games faster than any other high school coach in Arizona history, Busken coached Southern Utah, West Texas State, Millsaps College and Western New Mexico. The 18-hour bus rides to and from games at Western New Mexico — some of which he drove — weren’t fun, but there were other reasons why he returned to the high school level.

Busken said he likes the idea of shaping a high schooler from age 14 until they graduate. He said a college coach can’t do that to the same degree because a 19-year-old may already be somewhat “ruined.”

“Coach is kind of like another dad to me, he teaches me what’s right and what’s wrong,” said Tony Salgado, a rising senior center. “Just teaching me a lot of things I didn’t know.”

He said the most important aspect of turning around programs is establishing credibility. He said he did so at North High by holding true to his word. He told them he would be there working hard every day, and he was.

Something to think about as we continue to work pic.twitter.com/OJQzNTylue

Bob Chappelle, the former North High football coach, stepped down in the spring of 2014. Since then, Busken has worked tirelessly to build trust with his players, starting with the players he inherited who were shocked and confused.

“What I heard from seniors at the time is that he just left out of the blue,” said Izzy Lagod, an incoming senior offensive tackle. “He didn’t even let no one know what was happening, he just left one day. All the football players were just there and they didn’t know what to do.”

Upon his arrival, Busken had to show the players he was a man of his word. He was going to be there every day so they knew he wasn’t some stranger trying to wrongfully reform them.

“It is difficult because you can’t just trust somebody,” Salgado said. “It took some time to get used to.”

Busken is seemingly best known by his players as a disciplinarian. He regularly checks their grades and if they aren’t up to par, players find themselves running laps.

North High was originally returning 19 starters for the upcoming season, but Busken kicked two off the team largely because they weren’t showing up to practice.

But he also tries to relate to them. The Mustangs have an annual end-of- season Halloween party and Busken once dressed up as Austin Powers, the famous movie character from the hit action-comedy series. Jason Cortez, a rising senior strong safety and slot receiver, said it was one of the funniest things he’d ever seen.

In addition to coaching Mountain View, Busken was hired to coach Basha in 2010 after leaving the college scene. Those two programs were different than North High, though. Busken said players at Mountain View and Basha probably had more stable situations with two-parent families than students at an inner-city school.

For kids at North High, football may be better than the alternative.

“Their parents are great about getting them here and understanding that they can be with coach,” Busken said. “They don’t want them out running the streets, but if they’re staying in the weight room with coach, you can stay as long as you want.”

Inner-city students often believe attending college is unrealistic. However, Busken has always tried to use his college connections to help his North High players.

Cortez transferred from Chavez High School before his sophomore year so he could play for Busken.

“Before I came here, I had no idea,” Cortez said. “I didn’t think that colleges would come look at me. I moved here because I knew that he was a good coach and I’ve been seeing the difference because there have been colleges looking at me.”

When Busken arrived at North High, there wasn’t much of a program. None of the ninth graders on the freshman football team had ever played organized football.

But the numbers have consistently improved. In 2015, 11 ninth graders had played before and the team went 7-2. Last season, 15 had previous organized football experience and the group went 7-2 again.

The school now has a feeder program where young players enter the school and set their sights on one day playing for the varsity team. Busken said the school is attracting smart students because of its IB program, but perhaps the increased influx of talent is just one representation of the work he’s done throughout the past three years.

Just as he has asked his players to, Busken has worked overtime. He has found himself arriving earlier in the morning and staying later at night. He jokes that he is lucky he has a wife who doesn’t like him being home.

“It’s just frustrating that some days, you wonder what you’re doing,” he said. “But you got to get up and get back to work.”

Busken said he once contemplated retirement during his North High tenure. If he had done so, he would have been walking away from the same kids he found three years ago. The ones who needed a leader in their everyday lives and another support system.

Thankfully for them, he stayed. As a token of their gratitude for his work turning around the program and changing their lives, players shake Busken’s hand before leaving the field when practice ends.

Their gesture is just another reason why North High has separated itself from other stops in Busken’s 40-year coaching career.

“I’ve never been a place that kids appreciate you more than here,” he said.