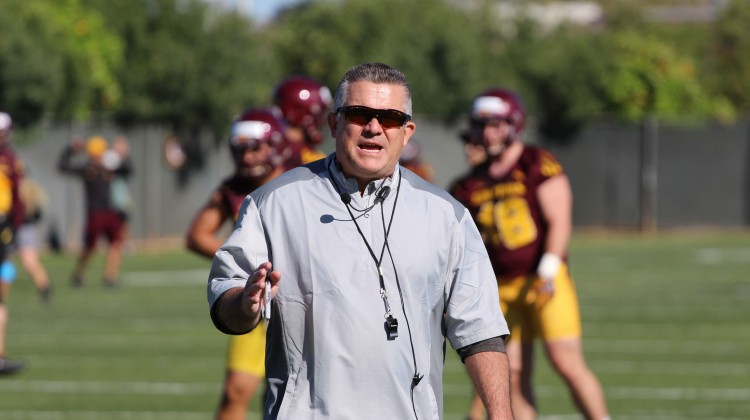 The Arizona State Sun Devils are hosting their spring game on Saturday afternoon at 2:00 at Sun Devil Stadium, giving fans an opportunity to see the Maroon & Gold hit the field for the first time in 2017.

Here are five storylines to watch this weekend in Tempe.

While throughout the early goings of the Sun Devils’ spring practice sessions have given the impression of Wilkins having the upperhand, Barnett has began to find his way, with his performance in ASU’s most recent scrimmage suggesting he’s not going away just yet.

It’s safe to say Wilkins is the leader now, however Saturday will allow fans and pundits alike to decide for themselves who gives the Sun Devils their best shot at finishing towards the top of the Pac-12 South.

Early on, it appears the former Alabama wide receivers coach will cater to his personnel’s strengths, notably in the backfield and at wide receiver. Many wonder how integral senior running backs Kalen Ballage and Demario Richard will be in this year’s offense, as both have drawn praise from both teammates and coaching staff alike throughout the spring.

Coming to an end zone near you. ? pic.twitter.com/HDO4v5xLSJ

3. The Secondary…For the second straight season, ASU’s pass defense ranked amongst the worst in the country. Phil Bennett, the Sun Devils’ new defensive coordinator who arrives via Baylor, has spoken of ensuring his best 11 are out on the field, but the principal has been difficult to employ with key defensive members nursing injury, including starting safeties Armand Perry and Marcus Ball, as well as starting cornerback Kareem Orr.

How will the back five look for ASU on Saturday? Redshirt freshman Chase Lucas, a local product out of Chandler High School, has impressed this spring, and appears ready to compete (and perhaps maintain at this point) one of the starting corner positions. Who else can emerge in a unit seeking to re-establish itself as one of the squad’s strengths.

Not only will the depth chart and how the unit stacks up be something to watch, but whether or not they can win the battle along the line of scrimmage against the Sun Devils’ front four will be interesting to see on Saturday, too.

5. The Talent…The Sun Devils have a strong core of top players: running backs Kalen Ballage and Demario Richard, wide receiver N’Keal Harry (seven total touchdowns in 2016), outside linebacker (Devilbacker) Koron Crump (nine sacks in 2016), and defensive end JoJo Wicker (11 ½ tackles for loss in 2016) each possess the capability of taking over a game when playing at their highest level.

These players — as well as others, such as tight end Jay Jay Wilson — could flash their potential as being difference makers in front of a live audience on Saturday.