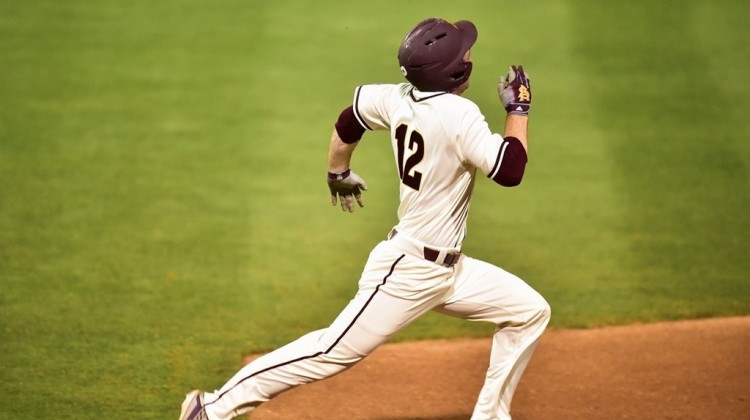 Pac-12 baseball is in full swing. Here on Sports360AZ.com, Pac-12 at the Plate is the place to keep up with how ASU and Arizona baseball are stacking up in the conference. This week No. 7 Arizona hosts Oregon and ASU hosts Washington State. Both series will be played Thursday-Saturday because of Easter on Sunday. Here’s what you need to know about last weekend’s conference series and what to watch for this weekend:

Junior Eli Lingos had been sick all week with the flu, but got the start on Friday. After 16 pitches, however he came out still not feeling 100%. The rest of the weekend, the Sun Devils struggled to get into a groove on both sides of the plate.

Sophomore outfielder Gage Canning had a big outing on Sunday knocking his first home run of the season and going 2-4. But, Canning’s big ABs, along with an impressive outing for junior outfielder Andrew Shaps on Saturday, wasn’t enough to power past Cal.

This weekend after a midweek win against UNLV, the Sun Devils will look to rebound against Washington State. The Cougars have been struggling in conference play as well, they sit at a 2-7 record.

For WSU, junior infielder Shane Matheny is a guy to watch at the plate. Matheny is tied for third in the Pac-12 with 12 doubles. On the bump, reliever Scotty Sunitsch has been on for the Cougars with seven saves in his 15 appearances.

Arizona took the series at Washington State 2-1 over the weekend. Friday, senior lefty JC Cloney was taken out after two pitches due to tightness in his bicep.

JJ Matijevic was named the Pac-12 Player of the Week for his impressive outings against ASU last Tuesday and over the weekend at WSU. Matijevic went 9 for 16 with seven extra base hits. Wednesday, Matijevic was also one of 40 players to be named to the USA Baseball Golden Spikes Award Midseason watch list.

Oregon will come down to Tucson hoping to slow down Arizona’s offense and continue their 5-game win streak. Junior left-hander David Peterson, who was also named to the Golden Spikes Award watch list, will be the threat for the Wildcats on the bump. Peterson has seven straight wins coming into Thursday’s matchup with Arizona with a 2.06 ERA and 77 strikeouts this season. Offensively, the Ducks have big hitters in freshmen infielders Morgan McCullough and Spencer Steer. McCullough is 9 for 16 in the last five games and is batting at .263, while Steer is batting at .292 with six doubles and two homeruns.

Cloney is expected to start on Thursday, barring any issues with soreness.

ASU snapped their five-game losing streak against UNLV on Tuesday with a 5-3 win against the Rebels. Lingos got the win, going 5 1/3 innings allowing two earned runs on seven hits with one walk and four strikeouts. Right-hander Eder Erives got his third save of the season in a solid outing as well. Erives went 3 2/3 innings allowing no hits with seven strikeouts. Freshman Tyler Williams went 2 for 3 on the night, hitting his fifth home run of the season.

Arizona traveled north to take on Grand Canyon Tuesday night. Matijevic went 4 for 5 on the night, while Mitchell Morimoto went 2 for 5 with 2 RBIs. Seve Romo was impressive in relief going 3 1/3 innings in the 7-3 win.

No. 1 Oregon State @ Washington: The Huskies are looking to give the Beavers their first conference loss this weekend. OSU is 12-0 and on a 24-game win streak. Washington took the series 2-1 last weekend against UCLA, their first series win against the Bruins in L.A. since 2005.

Cal @ Utah: The Golden Bears’ early struggles have seemed to disappear. With a sweep of ASU this past weekend, Cal will look to keep the momentum against a Utah team that put up a tough fight against Oregon State last weekend.

UCLA @ No. 17 Stanford: UCLA is hoping to get back on track this weekend against Stanford. The Bruins were on a six-game win streak with two straight series wins against Cal and ASU before last weekend’s series loss to Washington. Stanford won it’s series against USC last weekend and are looking to improve in conference play.