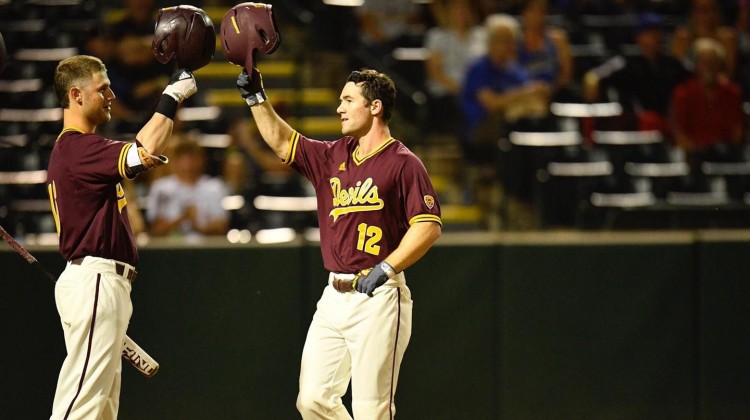 Pac-12 baseball is in full swing. Here on Sports360AZ.com, Pac-12 at the Plate is the place to keep up with how ASU and Arizona baseball are stacking up in the conference. This week No. 12 Arizona travels to No. 20 Stanford and ASU heads to Oregon. Here’s what you need to know about last weekend’s conference series and what to watch for this weekend:

Arizona Looks to Bounce Back

For the second straight season, Utah has managed to slow down Arizona with a sweep of the Wildcats. The defending Pac-12 champion Utes traveled to Tucson and were able to pounce on the Wildcats’ pitching.

JC Cloney did not pitch against Utah. Head coach Jay Johnson said he doesn’t believe there is anything serious, but wanted to take the extra precaution with Cloney.

JJ Matijevic leads the nation with 22 doubles and leads the Pac-12 in just about every offensive category. The Wildcats lead the Pac-12 as a team in offense as well.

Arizona's JJ Matijevic is tops in the nation with 22 doubles this year!

No. 20 Stanford is coming off of a big sweep of Oregon as they host Arizona this weekend.

Junior Quinn Brody is the guy to watch at the plate for the Cardinal. Brody has two Pac-12 Player of the Week honors under his belt this season and leads the team with 11 doubles, six homers and 34 RBIs.

After a quiet weekend for the Wildcat bats, Arizona will look to capitalize on Stanford pitching to get back on track.

Lefty Kris Bubic (3.78) will get the start for Stanford on Thursday. Cameron Ming (2.36) is slated to start for Arizona.

This series will be big for Arizona to keep a solid tone for the remainder of the season.

Last weekend, ASU took a break from conference play to take on Cal State Bakersfield. The Sun Devils took the series 2-1. Gage Canning had another big weekend for ASU going 10-13 at the plate. It’s worth mentioning that not only does Canning make things happen offensively, but he’s made many big plays in right field this season as well.

This weekend the challenge for the Sun Devils will be keeping Oregon quiet at the dish. Junior infielder Kyle Kasser and freshman infielder Spencer Steer with be the guys to keep an eye on. On the bump for the Ducks, junior lefty David Peterson will likely give the Devils some trouble on Friday. Peterson has a 2.20 ERA in 65 1/3 innings this year with 87 strikeouts.

ASU is 5-10 in Pac-12 play and 18-20 on the season. With 17 games remaining, ASU is looking to find some last minute momentum to continue the country’s longest streak of 30-win seasons. Unless they can find that momentum this weekend against the Ducks, and maintain it, it’s looking like the 54 season record may come to an end.

Cal @ Washington: Cal is coming off a sweep of USC, while Washington is coming off a series loss to Washington State. Both of these teams have had their highs and lows this season. Cal is at a high with an 11-7 record in the conference, just behind Oregon State. Washington has fallen to an 8-7 record, and will look to get back to the top of the Pac this weekend.

USC @ No. 1 Oregon State: USC has found itself towards the bottom of the Pac with a 5-10 record after being swept at Cal. Oregon State still sits as the unanimous No. 1 and even after a loss at UCLA last weekend, the Beavers haven’t been slowed down much.