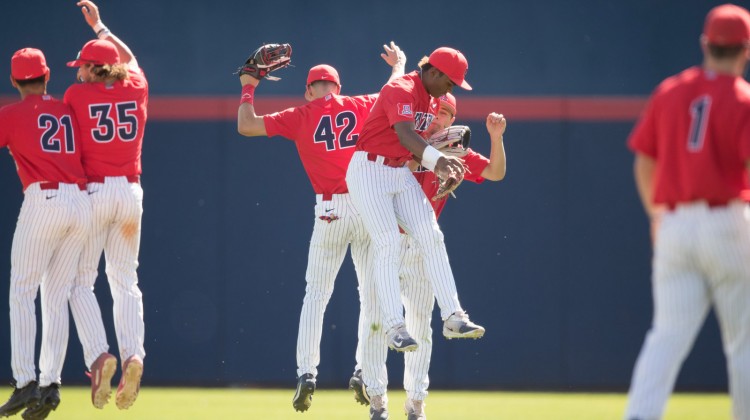 Pac-12 baseball is in full swing. Here on Sports360AZ.com, Pac-12 at the Plate is the place to keep up with how ASU and Arizona baseball are stacking up in the conference. This week No. 7 Arizona hosts Utah and ASU takes on Cal State Bakersfield in a non-conference matchup. Here’s what you need to know about last weekend’s conference series and what to watch for this weekend:

The Sun Devils turned things around in conference play with a sweep of Washington State last weekend. Senior outfielder Ryan Lillard came up big for ASU on Sunday with a three-run homer to tie up the game in the bottom of the ninth. Then freshman outfielder Hunter Bishop came up and hit a walk-off single to give the Devils the sweep.

Tuesday night, ASU dropped a midweek matchup against UNLV in Las Vegas, 13-12. After holding a one run lead heading into the ninth, ASU added some insurance with two runs in the top of the frame, but a defensive error and some quick Rebel bats brought home four runs in the bottom of the frame to give UNLV the win.

This weekend the Devils will take on Cal State Bakersfield in a non-conference matchup. The series will give ASU a chance to make some more adjustments before returning to conference play next weekend at Oregon.

With a series win against Oregon last weekend, Arizona has further proved they are a tough team to beat.

At this point, it’s expected that the Cats offense be nothing less than fire. Saturday, the Wildcats shut down the Ducks in an 18-4 win to take the series. JJ Matijevic, again, had an outstanding weekend going 6-12. Alfonso Rivas had himself a day on Saturday, going 5-5 with four runs.

JC Cloney improved to 7-0 with his start on Friday. Cloney pitched six innings, giving up three runs on seven hits with one walk and five strikeouts. Cody Deason got the save on Friday. Deason is a guy to watch on the Wildcats’ staff.

Utah has been a team that is full of surprises, especially after taking the crown in the Pac-12 last season. Last weekend, the Utes got the series win against Cal. Senior infielder Dallas Carroll and sophomore outfielder DaShawn Keirsey Jr. will be the guys to watch at the plate for Utah. On the mound, sophomore righty Riley Ottesen will get the start Friday. Ottesen has a 3.07 ERA with 37 strikeouts in his 56 innings pitched.

No. 1 Oregon State @ UCLA: Washington snapped OSU’s 23-game win streak last Friday, but the Beavers still got the series win. UCLA topped Stanford on Saturday in extras to take the series. The Bruins are currently 9-6 in the Pac-12 and will look to see if they can also slow down the Beavers.

USC @ Cal: USC has hit a midseason skid. The Trojans have lost three straight series after dropping a non-conference series last weekend against No. 8 Cal State Fullerton. Cal dropped last weekend’s series against Utah 1-2. This series is sure to help one of these teams get back in it in conference play.

Stanford @ Oregon: Stanford dropped out of the NCAA Top 25 this week after dropping last weekend’s series, 1-2 against UCLA. Oregon bested Arizona on Thursday, but couldn’t do again the rest of the weekend. These two teams, like USC and Cal, will see what they can do this weekend to use this series to right the ship in the Pac.

Washington @ Washington State: With a win against Oregon State that snapped the Beavers win streak and two-games of a good fight against OSU, the Huskies will look to dominate this series against a struggling Washington State team. WSU is 2-10 in Pac-12 play after being swept by ASU last weekend. Washington sits at 7-5 and fourth in the Pac.