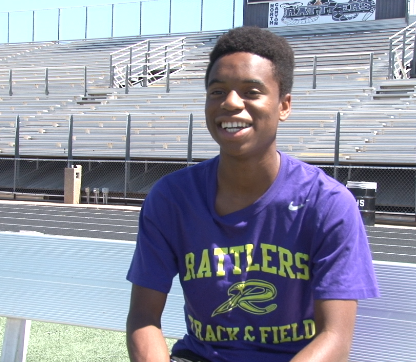 “I met him once, and I told him I was going to beat him.”

Moulton is one of the fastest sprinters in the country, with the seventh quickest 400-meter sprint in the nation at 47.15 seconds.

He also holds records at North Canyon High School in the 200 and 400-meter dash, and his relay team broke the 4×100 record.

Although the saying goes “you can’t teach speed,” Moulton’s work ethic has propelled him to the top. His talent as an underclassmen led him to practicing with the older, college-bound sprinters.

“All of those kids worked really hard, so Tyrees took a lot of their traits,” North Canyon Track Coach Airabin Justin said. “We have a really tough practice, so his work ethic is great, especially this year. This year’s the most he’s worked when he realized he has the opportunity to go to college.”

Moulton, only a junior, is already thinking about schools like USC, Oregon and Florida. He hopes to get a scholarship so his mom and stepdad, who have been his biggest supporters, don’t have to worry about paying for college.

Besides his speed, his peers know him as a generous and outgoing leader of the team.

“He’s always getting us really hyped up,” fellow track teammate Amela Hodzic said. “Instead of being nervous, he makes us all more confident.”

“I transferred here my sophomore year,” sprinter Solomon Enis said. “I wasn’t talking to anyone, I was just sitting there at lunch…Tyrees would come sit with me, get lunch with me. It was cool.”

North Canyon’s track team is a close-knit group according to Moulton. He says they’re always supporting each other in practice and meets.

“If one of us is running at a meet, you can see all of us posted around the track yelling for each other,” Moulton said. “We’re yelling at each other, video-taping each other, hyping up each other. It’s a family.”

Moulton’s outgoingness and talent has made him a team and school favorite, as he participates in student council and does the morning school announcements. His cool demeanor comes from his motivation to be a people pleaser.

Moulton stays involved with track and school, but when he has free time his favorite hobby is photography.

“I try to be a photographer,” Moultan said. “We hangout at the park all the time, play basketball and stuff, so I take pictures.” He has his own website with original photos he’s taken of his friends.

“I’ve seen some of his pictures,” coach Justin said. “He’s a very talented kid and has a lot of drive to do a lot of things.”