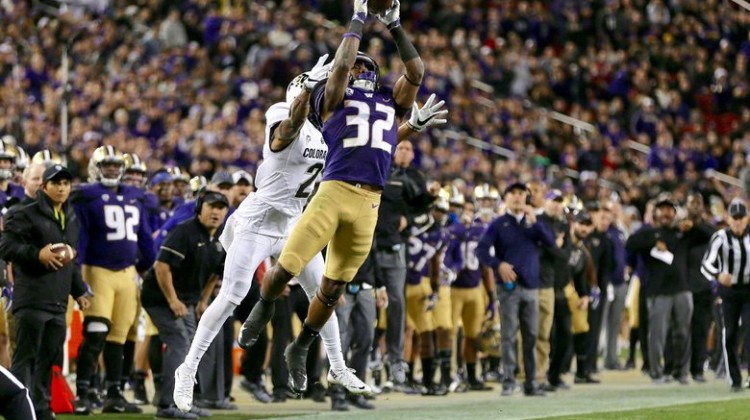 The Bird Gang didn’t wait long on Friday to make moves to bolster the secondary.

The Cardinals trade a package of picks: their second, fourth, sixth and a 2018 fourth round pick to move up nine spots and take Washington safety Budda Baker.

“It means a lot to me just because you don’t really see that a lot and it just showed how much interest they had in me to move all the way up from the 45th pick to the 36th pick,” Baker said on a conference call.

The Husky defensive back played in 39 games in three years and accumulated 199 tackles, 13 for loss and five interceptions. As a junior, he was a consensus All-American. He is a state champion in the 100-meter dash. He had no problem jumping to the next level, and recorded 80 tackles as a true freshman.

Despite being 5-foot-9, Baker delivers huge hits and plays like a linebacker.

“For me, along the lines of Tyrann Mathieu, I feel like I can bring versatility. I feel like I can play free safety, strong safety, corner, nickel,” Baker said. “I’ve shown a lot of stuff on film. I’m able to read the quarterback, make certain tackles, open-field tackles and all that type of stuff. I feel like (the Cardinals) are getting a great athlete.”

An NFC scout describes him as the following:

“I would leave him as a centerfielder and then roll him down over the slot if you needed too. He’s too small to cover tight ends, but he’s got great instincts in coverage which is why he should shine as a single-high.”

Baker joins Haason Reddick in the Cardinals’ 2017 draft class. The Red Birds still hold pick #77 in the third round.