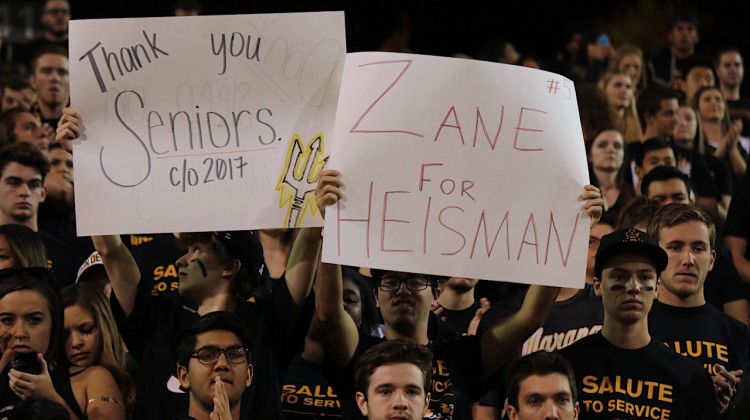 ASU kicker Zane Gonzalez has collected the accolades, limited the returns for the opponents, hit field goal after field goal where fans go, “50+ yards? Let’s give it a shot.”

Now, he adds one more achievement to the resume: NFL draft pick.

The ASU kicker was selected by the Cleveland Browns in the seventh round with the 224th pick.

Gonzalez holds the FBS record for field goals made with 96, a record held previously by Florida State’s Dustin Hopkins, who made 88. His senior season, he was an All-American and made 23/25 fields goals with 7/9 of them being 50+ yards. The Lou Groza award winner was also the first kicker to convert 20+ field goals in each of the four years he played for the Sun Devils. While he was a fan favorite for ASU and Pac-12 fans, he became a household name on the national scale after hitting a 51, 50 and 59-yard field goal his senior year against Colorado. He also kicked off 79 times in 2016 and forced opponents to take a touchback 59 times.

According to Pro Football Focus, the only kicker to ever connect on more 50+ yard field goals than the ASU kicker was current Baltimore Ravens kicker and perennial Pro Bowler Justin Tucker. They also rated and projected Gonzalez as high as a day two selection.

Gonzalez has been evaluated as a guy who can step in and start day one, and the Browns currently have Cody Parkey, who went 20/25 in 2016, and Brett Maher on the roster

The ASU kicker was the second kicker to be drafted this year behind Memphis kicker Jake Elliott, who was drafted by the Cincinnati Bengals with pick #153, meaning current Tigers head coach and former Arizona State deputy head coach and offensive coordinator Mike Norvell has coached the top two kickers in the 2017 draft.

Gonzalez is the first Sun Devil selected in the 2017 draft.